Sixteen months ago, canon lawyer J.D. Flynn, who works for Philadelphia Archbishop Charles Chaput (image below from Google) on the "lowest professional rung of ecclesiastical bureaucracy," wrote for National Review an extraordinarily adoring portrait of his boss.   Though he focused on saintly personal characteristics of the cleric, Flynn wrote

The “archconservative” Chaput, by the way, has railed against the death penalty for years, and partnered with liberal legislators to talk about immigration reform. The “liberal” Pope Francis, by the way, made opposition to abortion a central argument in his encyclical on the environment. Catholic social teaching hardly fits in the narrow strictures of partisan political platforms.

Not impressed. No doubt Chaput has talked about immigration reform, which he might support in principle, but definitely would be a boon to the ranks of membership in the Roman Catholic church. The death penalty is such a pivotal issue that less year it directly affected twenty-two (22) individuals in this nation of 319 million people.

If Archbishop Chaput and Pope Francis are allies- fortunately, a dubious claim- we, Catholics and non-Catholics such as myself alike, should be worried. Joel Mathis of Philadelphia magazine reports that at the annual Synod on the Family in Vatican City, Chaput

"I’ve been surprised by how little the synod text says about the joys of having children, and especially the beauty and heroic witness of large families. Children are the future. They’re a gift from God. They renew the world," Chaput told the magazine.

"It’s sad to see so many couples today cheat themselves out of more love and more joy by having only two children. Life is meant to be an adventure, to be abundant – not to be strangled by worry. God provides. He never abandons hearts that are generous. I have tremendous esteem for large families. I wish we had many more of them. They’re the hope of the Church."

Having been alerted to this revolting statement by reader GDR, I had to check the web to confirm that Philly magazine has not been turned into an East Coast version of The Onion.  Confirmation came in the form of various articles of local interest, sports and otherwise, with nary a piece revealing that Barack Obama has admitted he was born on planet Krypton, where he introduced George Reeves to Islam.

The low-hanging fruit would be to label as a hypocrite the Archbishop, having sworn off intercourse with the opposite sex and starting a family. Having done so, he nevertheless wishes" we had many more" large families.  Hypocrites abound.  Odder is Chaput's theory is that "life is meant to be an adventure" and "not to be strangled by worry" because it runs counter to Genesis 3:14-16, in which Moses writes (NIV translation)

Then the LORD God said to the woman, "What is this you have done?" The woman said, "The serpent deceived me, and I ate." So the LORD God said to the serpent, "Because you have done this, "Cursed are you above all the livestock and all the wild animals! You will crawl on your belly and you will eat dust all the days of your life. And I will put enmity between you and the woman, and between your offspring and hers; he will crush your head, and you will strike his heel." To the woman he said, "I will greatly increase your pains in childbearing; with pain you will give birth to children.Your desire will be for your husband, and he will rule over you."

It might be wishful thinking to believe that Chaput would be disturbed to learn the reasons- and they are many, complex, and largely of secular origin- that life is often strangled by worry, marked by randomness and even brutality. By one reckoning, worldwide there are 750 million people with inadequate access to clean drinking water, 805 million with insufficient food, and 1.6 billion without electricity.

And the children, of whom the Archbishop wishes there were far more and for whom "God provides":   two million children a year die because they are too poor to afford the treatment for preventable diseasea while 165 million children under the age of 5 in 2011, it is estimated, "were stunted (reduced rate of growth and development) due to chronic malnutrition." Whatever God's role or lack thereof, there is a tremendous number of children not provided for in the developing world, and even a few here, as most other clerics understand.

Notwithstanding the roughly 800 women globally who in an average day die from causes related to pregnancy, childbirth, or the postpartum period, tens of millions of women each year decide to get pregnant to have a child. Good for them or as Chaput would say, "God bless them." It's their choice, as it ought to be, and as it ought to be not to become pregnant.

Chaput is not for choice (not by a longshot) but he is not insensitive. He is, evidently,concerned about the 20-25 murderers executed each year in the United States. 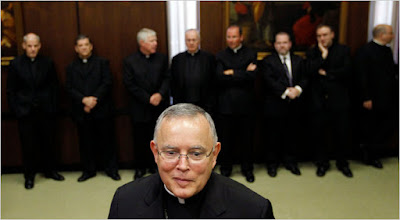