Steve M. believes Hillary Clinton won last night's Democratic debate because those he terms "the damn pundit gatekeepers," who value style over substance  believe she was triumphant, and that counts in the march to the presidency.

Mark Halperin believes Senator Sanders "appeared rattled and defensive when Clinton went after him. Struggled to engage his rival in a commanding way, often staring straight ahead rather than meeting her face to face;"  the National Review's Jim Geraghty argues Sander's "style doesn’t transfer well to a broader audience" while colleague Jonah Goldberg slams the Vermont senator because he "honestly thinks that presidential campaigns are won with a Ron Paul-like focus on the issues, as he defines them. And, he’s simply afraid to go for the jugular." Chuck Todd contended that Hillary Clinton was primed and ready, unlike Sanders, who "was totally unprepared. He treated this like something he'd done before."

There was insufficient attention paid by "the Kool Kidz" to issues, which is hardly unprecedented and aided by the relative lack of disagreement among the candidates.  Typical was climate change, which every candidate seemed to recognize as substantially man-made.

Lincoln Chafee wasted no time, in his opening remarks labeling climate change "a realt hreat to our planet" and in closing remarks listing it as "among the many challenges facing us."  Former Governor O'Malley linked climate change to the "cascading threats" of ISIL and of a nuclear Iran.  Front-runner Clinton cited "the opportunity posed by climate change to grow our economy" and claimed she has been "in the forefront of dealing with with climate change." Her main rivalasserted "claimate change is real, it is caused by human activity." Even the somewhat more conservative former senator Jim Webb was more progressive and realistic than any Republican candidate (save possibly Lindsay Graham, under 1% in polls), explaining as a US Senator he "was an all-of -the-above energy voter" who "introduced legislation to bring in alternate energy as well as nuclear power."

Still, something was missing in the plea of Democratic candidates not to ignore global warming. David Frum wrote in February, 2014

Congratulations: If you're reading this, there's a good chance you still have electricity. Unfortunately, hundreds of thousands of Americans hit by winter weather in the South this week couldn't join you. And ice and storms making their way north threaten loss of power stretching to Vermont.

Why do Americans tolerate such outages?

They are not inevitable. The German power grid has outages at an average rate of 21 minutes per year.

The winds may howl. The trees may fall. But in Germany, the lights stay on.

There's no Teutonic engineering magic to this impressive record. It's achieved by a very simple decision: Germany buries almost all of its low-voltage and medium-voltage power lines, the lines that serve individual homes and apartments. Americans could do the same. They have chosen not to.

The choice has been made for reasons of cost. The industry rule of thumb is that it costs about 10 times as much to bury wire as to string wire overhead: up to $1 million per mile, industry representatives claim. Since American cities are much less dense than European ones, there would be a lot more wire to string to serve a U.S. population than a European one.

1. There's reason to think that industry estimates of the cost of burying wires are inflated. While the U.S. industry guesstimates costs, a large-scale study of the problem conducted recently in the United Kingdom estimated the cost premium at 4.5 to 5.5 times the cost of overhead wire, not 10 times.

2. U.S. cost figures are a moving target. American cities are becoming denser as the baby boomers age and opt for central-city living. Denser cities require fewer miles of wire to serve their populations.

3. Costs can only be understood in relation to benefits. As the climate warms, storms and power outages are becoming more common. And as the population ages, power failures become more dangerous. In France, where air conditioning is uncommon, a 2003 heat wave left 10,000 people dead, almost all of them elderly. If burying power lines prevented power outages during the hotter summers --and icier winters -- ahead, the decision could save many lives.

4. As you may have heard, many Americans remain unemployed. Joblessness is acute among less educated workers, many of whom used to work in the depressed construction industry. Burying power lines is a project that could put many hundreds of thousands of the unemployed to work at tasks that make use of their skills and experience.

The interest rate for government and large utilities was low in February, 2014 (prime rate graph and chart from moneycafe.com). The prime interest rate at the time was 3.25%. It has remained 3.25%,

It's not too late to begin laying the groundwork for getting utility lines underground, to avoid periodic weather-related disasters like the one that befell Liberty, MS in June, 2014 (photo below from The Clarion-Ledger). It won't happen, of course; Republicans want to spend less money on virtually everything but the Pentagon and  Democrats are terrified of the "tax-and-spend" label. Meanwhile, we will continue to consider ourselves first-class while we are burdened with a power grid that is second-rate. And so it goes for the most exceptional of exceptional countries. 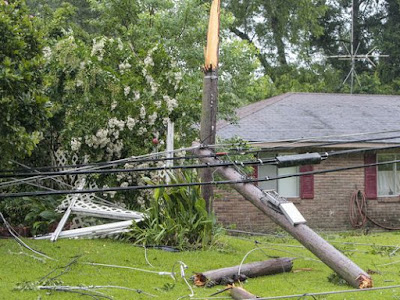