Think Progress' Judd Legum swears George W. Bush was sworn in as President of the United States on January 20, 2001.  "Contemporaneous reports," he argues, "suggest that America’s arcane election rules and a favorable Supreme Court ruling handed the election to Bush, even though he lacked popular support."

Legum even displays a 2001 calendar (below) which indicates that early September of 2001 came about some 7-8 months after Bush allegedly took the oath of office (photo below) in Washington, D.C. that January.  Additionally, he contends, there is evidence that Mr. Bush during that period routinely received the Presidential Daily Brief, which in one case was titled "Bin Laden Determined To Strike in U.S."  "Taking into account all the evidence," he contends,"it seems more likely than not that George W. Bush was president on September 11, 2001." 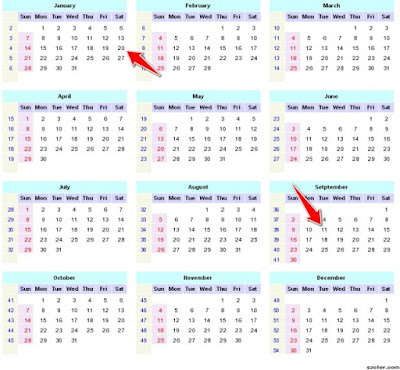 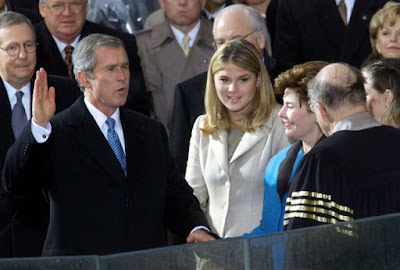 It shouldn't be necessary to explain all that. But it is if you're the guy Florida voters were daft enough to have elected their chief executive in November, 1999 and re-elected four years later.  At the second presidential debate, following criticism of President George W. Bush by Donald Trump, John Ellis Bush responded "You know what? As it relates to my brother, there is one thing I know for sure, he kept us safe."

There is, as was pointed out afterward, that slight complication of "9/11."  The younger Bush, attempting to follow the footsteps of the President who thought that PDB was no big deal ("All right. You've covered your ass, now"), may not fully comprehend the enormity of the terrorist attack which killed north of 2900 Americans. However, he should remember "9/11," which has become part of the American lexicon. (Perhaps he thinks it is a competitor of 7-11, but two hours later.)

Last Friday, Donald Trump- without even having read Legum's piece- made the outrageous claim "When you talk about George Bush — I mean, say what you want, the World Trade Center came down during his time.  Blame him or don’t blame him, but he was president. The World Trade Center came down during his reign.” He added "I’m not blaming George Bush. But I don’t want Jeb Bush to say, ‘My brother kept us safe,’ because September 11th was one of the worst days in the history of this country."

They knew an attack was coming.  George Tenet, the CIA director, knew there would be an attack, and he said so to the president and said so to everybody else that would listen....

Nero-like, George W. Bush fiddled while Rome burned- or, rather, cut down brush at his ranch while he knew a major terrorist attack was likely to be launched against the nation he had been almost elected to lead.   Nonetheless,  brother John wrote "In the latest episode of the reality show that is Donald Trump’s campaign, he has blamed my brother for the 9/11 terrorist attacks on our nation. That Trump echoes the attacks of Michael Moore and the fringe Left against my brother is yet another example of his dangerous views on national-security issues."

Oh, he is so losing this fight, as well as the nomination he thought he was entitled to. It is, though, too easy merely to criticize Mr. Bush because he ignores the most deadly terrorist attack ever upon the country. Unfortunately, if John had limited support of his brother to the notion of having kept the USA safe following the attack of September, 2001, he might have gotten a pass, unjustifiably, from the media and even the leading GOP presidential contender.  On All In with Chris Hayes Friday, Josh Barro explained

And I think what Jeb means when he says he kept us safe, I think it`s related to the sort of deranged approach that a lot of Americans on all parts of the political spectrum have had to terrorism in the wake of September 11th, which is there came this idea that terrorism is common and is a leading source of mortal threat to Americans.

And the fact that we have not had another major terrorist attack since September 11th is therefore a demonstration of extraordinary effort by the government to prevent such attacks.

In fact, attacks like this are extremely rare. It was not a normal thing there would be an attack like this and the fact that there was not another attack like that during his presidency or during President Obama`s presidency is not a demonstration that something materially changed in how good we were preventing these things.

But a lot of people do think that. They think it was extraordinary that there were no further similar terrorist attacks on American soil.

So maybe we should be grateful that John Ellis Bush, ignorant of recent American history, overprotective of big brother, or flat-out lying, went overboard in defending Bush 43. Ultimately, he has a right to read history. He has a right to interpret history or even to erase it from memory. But he has no right to re-write history, even if he is from the House of Bush.