Not the one from Campbell Brown, an activist in the destroy-public schools reform movement. “What happened here is very clear: The teachers unions have gotten to these candidates," maintains Brown, who had planned for Democratic candidates an October education forum sponsored by her organization, The Seventy Four, along with "school choice advocacy group" American Federation for Children, and the Des Moines Register.  Her scheme fell apart, however, when it became clear that the candidates notably decided to steer clear.

None of the Democratic candidates claims to be a member of MENSA but all recognize an ambush when they see one  and Brown, an advocate of charter schools, standardized testing, ending tenure and derailing due process rights of teachers, was disappointed she had been denied the opportunity.

While disagreeing strenuously with Brown, American Federation for Teachers director Randi Weingarten acknowledged "Campbell Brown is entitled to her opinion about public education." So, too, perhaps, is the disingenuous ex- District of Columbia city councillor Kevin Chavous, now the executive counsel for the American Federation for Children, who perversely claimed

It’s shameful how my party is being held hostage by the unions. I see no difference between their strong-arm tactics on the Democrats and the gun lobby’s tactics on Republicans. And for the candidates to refuse even to discuss these issues, I think it’s insulting to the Democratic base of black and brown voters.

Leave aside that Mestizo, Chicano, Latino, Hispanic, Mexican, Salvadoran and Puerto Rican identify ethnicity, culture, and national heritage rather than race, and (as once common) that referring to Hispanics as "brown" is as accurate as referring to Asians as "yellow" and Native Americans/American Indians as "red."

Chavous purports to "see no difference between the"strong-arm tactics on the Democrats and the gun lobby's tactics on Republicans."  There is a huge- nay, gargantuan- difference.   One argument is made on behalf of corporate interests; the other, against.

While conceding that most of the funding (chart below from Center for Responsive Politics via CNBC) of the National Rifle Association is derived from merchandising ads in the organization's magazine, membership dues, and elsewhere, the Huffington Post in 2013 explained

“Your fight has become our fight,” then-NRA president Charlton Heston declared before a crowd of gun company executives at the annual SHOT Show, the industry's biggest trade show. “Your legal threat has become our constitutional threat," he said.

Following the passage of the shield law that dismembered those lawsuits, the NRA launched a new fundraising drive targeting firearms companies the organization had just helped in a big way. That effort, dubbed "Ring of Freedom," paid off handsomely. Since 2005, the NRA drive has pulled in $14.7 million to $38.9 million from dozens of gun industry giants, including Beretta USA, Glock and Sturm, Ruger, according to a 2011 study by the Violence Policy Center, a group that favors gun control.

The Violence Policy Center study cited an NRA promotional brochure about the corporate partnership drive, noting that LaPierre promised that “this program is geared towards your company’s corporate interests.”

Despite the millions of dollars it has collected from the gun industry, the NRA’s website says “it is not affiliated with any firearm or ammunition manufacturers or with any businesses that deal in guns and ammunition.”

Besides its heavy lobbying for the special legal protections for gunmakers and distributors, the NRA pushed successfully in 2004 to ensure that a 10-year ban on assault weapons, enacted in 1994 over strong NRA objections, wasn’t renewed. Since then, annual rifle production by U.S. gunmakers has risen by almost 38 percent, according to federal gun data.

“The NRA clearly benefits from the gun industry,” William Vizzard, a former agent with the Bureau of Alcohol, Tobacco, Firearms and Explosives, told The Huffington Post. “There’s a symbiotic relationship. They have co-aligned goals much more than 30 or 40 years ago.”

Vizzard noted that the gun industry has evolved slowly in recent decades from a “stodgy and conservative” business, which sold mostly rifles and sporting arms, to one that now traffics in paramilitary weapons and handguns. The NRA and the gun industry “have grown closer as the business has changed,” he said.

The intertwining interests of the NRA and the gun industry are also underscored by the gun company executives on the NRA board.

These companies and other gun industry giants have ponied up big bucks to the NRA since 2005, according to a list of NRA corporate partners posted at its last convention.

Another notable donor is Freedom Group, which owns Bushmaster, the company that made the AR-15 military-style rifle used by Adam Lanza in his bloody assault on Sandy Hook. The Freedom Group has donated between $25,000 and $49,000 to the NRA’s corporate effort.

The NRA’s most generous gun industry backer is MidwayUSA, a distributor of high-capacity magazine clips, similar to ones that Lanza loaded into his Bushmaster rifle and Glock pistol. These clips increase the lethality of weapons by allowing dozens of shots to be fired before the shooter has to reload. According to its website, Midway has donated about $7.7 million to the NRA through another fundraising program that dates back to 1992. Under this program, customers who buy Midway products are asked to “round up” the price to the next dollar, with the company donating the difference to the NRA. 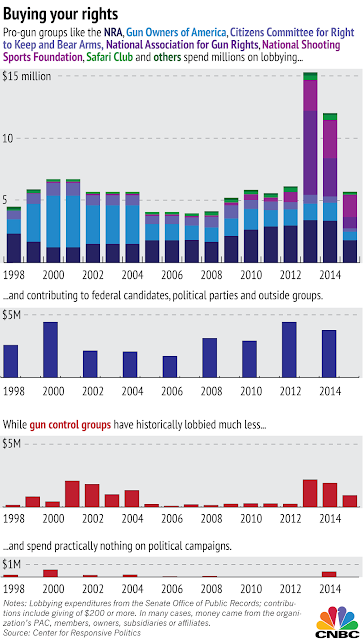 Just as the gun-rights lobby is intimately connected with industry, the education reform movement headed by people such as Brown, Chavous, and Michelle Rhee is intimately involved with the financial sector.   Also in 2013,  Forbes observed

Charters have a limited admissions policy, and the applications can be as complex as those at private schools. But the parents don’t pay tuition; support comes directly from the school district in which the charter is located.   They’re also lucrative, attracting players like the specialty real estate investment trust EPR Properties

The Arizona Republic found that charters “bought a variety of goods and services from the companies of board members or administrators, including textbooks, air conditioning repairs and transportation services.” Most charters were exempt from a requirement to seek competitive bids on contracts over $5,000.

A pretty good scam that, but it gets worse.  Democracy Now's Juan Gonzalez, focusing on New York State, earlier had found

It turns out that at the tail end of the Clinton administration in 2000, Congress passed a new kind of tax credit called a New Markets Tax Credit. And what this allows is it gives an enormous federal tax credit to banks and equity funds that invest in community projects in underserved communities, and it’s been used heavily now for the last several years for charter schools. And I focused on Albany, New York, which in New York state is the district with the highest percentage of children in charter schools. Twenty percent of the schoolchildren in Albany are now attending charter schools. And I discovered that quite a few of the charter schools there have been built using these New Markets Tax Credits.

And what happens is, the investors who put up the money to build the charter schools get to basically virtually double their money in seven years through a 39 percent tax credit from the federal government. In addition, this is a tax credit on money that they’re lending, so they’re collecting interest on the loans, as well as getting the 39 percent tax credit. They piggyback the tax credit on other kinds of federal tax credits, like historic preservation or job creation or Brownfields credits. The result is, you can put in $10 million and in seven years double your money.

And the problem is that the charter schools end up paying in rents the debt service on these loans. And so, now a lot fo the charter schools in Albany are straining paying their debt — their rent has gone up from $170,000 to $500,000 in a year, or huge increases in their rents, as they strain to pay off these loans, these construction loans. And the rents are eating up huge portions of their total cost. And, of course, the money is coming from the state.

So, one of the big issues is that so many of these charter schools are not being audited. No one knows who are the people making these huge windfall profits as the investors. And often there are interlocking relationships between the charter school boards and the nonprofit groups that organize and syndicate the loans. And so, there needs to be sunlight on this whole issue.

Skipping the forumproposed for later this month may not itself have been a good thing, for it may have been turned to the candidate's advantage. But if it is a foreshadowing of the approach of the candidates toward privatization- at least of education- it is a good, even very good, sign.