No Help From Her

At the annual meeting of the Democratic National Committee in August, Jonathan Martin of The New York Times noted on CNN, "The Obama-controlled DNC could not pass a resolution this weekend expressing support for President Obama's Iran deal. It's a bit of an embarrassment for the administration, seeing as how it's his party. He appointed Debbie Wassserman Schultz."

This is not the first time that she has put her parochial interests ahead of her party. Back in 2008, when she was running the DNC's "Red to Blue" project, she famously abstained from supporting three Democratic challengers to incumbent Republicans – the Diaz-Balart brothers and the ever-insufferable Ileana Ros-Lehtinen –friend to terrorists who blow up passenger jets – because she was friends with all three of them.

In the run-up to the 2008 congressional campaign, Wasserman Schultz, then co-chairperson of the DNC's Red to Blue program, and Republican Representative Ileana Ros-Lehtinen had

lavished compliments on each other at a Washington luncheon with Miami-Dade commissioners. "I can't say enough good things about Ileana Ros-Lehtinen; she has been my friend since I was first elected to office," Wasserman Schultz said, noting she relied on Ros-Lehtinen's advice to help balance the demands of elected office and motherhood.

Lending credence to the notion the chairperson actually may be a stealth Republican, last month

A senior state Democratic Party official likened the national party chairwoman’s tenure to a “full-fledged dictatorship,” amplifying growing unease among some top Democrats about party leaders’ efforts to restrict the number of candidate debates during the presidential primaries.

Deb Kozikowski, vice chairwoman of the Massachusetts Democratic Party, said the chief of the Democratic National Committee, US Representative Debbie Wasserman Schultz of Florida, had done a disservice to grass-roots volunteers by allowing Republicans to dominate the airwaves for the last month.

“How do I tell these really dedicated Democrats who work really hard from top to bottom that debates for our presidential candidates are restricted, and they’re there watching all these Republicans get all this air time?” she said. “I think about the folks at the grass roots who work day in day out, no money no glory, because they believe in democracy with a small ‘d’ and the Democratic Party with a large ‘D,’ getting bombarded with all these Republican candidates.”

Interviewed by MSNBC, Representative Tulsi Gabbard of Hawaii, a vice chairwomanof the DNC, stated "More and more people on the ground from states all across the country are calling for more debates, are wanting to have this transparency and greater engagement in our democratic process at a critical time, as they make the decision of who should be the next person to lead our country,"

Wasserman Schultz and her lieutenants evidently aren't listening to those people. Now Gabbard

said she was disinvited from the first Democratic presidential primary debate in Nevada after she appeared on television and called for more face-offs.

Ms. Gabbard confirmed on Sunday that her chief of staff received a message last Tuesday from the chief of staff to Representative Debbie Wasserman Schultz, the chairwoman of the national committee, about her attendance at the debate. A day earlier, Ms. Gabbard had appeared on MSNBC and said there should be an increase beyond the current six sanctioned debates...

“It’s very dangerous when we have people in positions of leadership who use their power to try to quiet those who disagree with them,” she added. “When I signed up to be vice chair of the D.N.C., no one told me I would be relinquishing my freedom of speech and checking it at the door.”

Now that one of the few Democratic debates is about to be held, the image of the Party may begin to improve.  But not necessarily, as displayed below by the photo illustration from Juliana Jiminez and photos by Scott Eisen/Getty Images and Darren McCuollester/Getty Images.  Jeremy Bailenson, founding director of Stanford University's Virtual Human Interaction Lab and professor in Stanford's Department of Communication, explains

CNN is partnering with a virtual reality company to enable viewers at home to feel like they are actually at the Las Vegas debate.

Granted, only a few hundred thousand people in the United States have virtual reality headsets at home, and of those who do, it could be a far smaller number who will actually watch Hillary Clinton square off against her main challengers Sen. Bernie Sanders and Martin O’Malley. But there is a risk that one or more of the candidates could look less than flattering, and that the image could go viral, creating an awkward storyline the candidates would typically want to avoid.

The fascinating question for me is why did the candidates agree to this when there is nothing to gain by participating in a debate broadcast in virtual reality?

New technologies bring new risks. In the first televised presidential debate in 1960, Richard Nixon’s ashen and sweaty appearance and frumpy ill-fitting suit made him look like he’d been “embalmed … before he even died,” then–Chicago Mayor Richard J. Daley said while the dapper, bronze-complexioned John F. Kennedy appeared the clear winner, even though most viewers agreed that Nixon performed better on the issues.

It may be a stretch to call this a potential Nixon moment, especially this early in the Democratic primary. But virtual reality presents a separate set of challenges that the candidates likely haven’t considered.

First, if Clinton or Sanders wants to win in the virtual reality version of this debate, they’d better negotiate for the middle podium. In live-streamed, stereoscopic video—a cutting-edge technology that will be used Tuesday night—typically there is a sweet spot.

Toward the edges, a viewer will see less depth, something like seeing out of one eye. Close one eye and look down at your hands on the keyboard for 20 seconds. Then open your eyes and, “pop,” you will see the benefits of stereoscopic vision.

Candidates closer to the center of the camera’s field of view will literally stand out more than those on the edges. A reach toward the camera by a candidate on the periphery may make his or her arm look stubby.

On the flipside, candidates can’t hide. The viewers will get to choose where they look, unlike the regular television viewing audience which relies on the CNN producer to decide on the camera angles. In virtual reality, those who want to spend two hours scrutinizing Sanders’ every facial tic and micro-movement can do so. The probability of YouTube-viral gaffes just went through the roof.

Then there is the issue of time. Candidates shouldn’t just lobby to stand in the center of the stage—they must speak first. Virtual reality displays can cause simulator sickness. Over time, a person’s visual system gets fatigued triggering nausea, dizziness, and disorientation. I have researched the psychological impact of virtual reality for almost two decades, and to date I haven’t worn a head-mounted display for more than 30 minutes. Tolerance for simulator sickness varies across people, but watching a two-hour debate in virtual reality will make many people feel ill.

CNN is trying to be a pioneer in a technology that is about to go mainstream. That is admirable. But this is the wrong experiment. Live-streamed virtual reality is a brand new technology, and there are bound to be some hiccups. Perhaps a pointing gesture will get distorted into a plastic man–like stretch, or a lean toward the camera will get exaggerated in depth and cause a horror-show flinch response by the audience. Remember, the volume of a scream—“Yaaahhh!!”— was enough to end Howard Dean’s campaign. 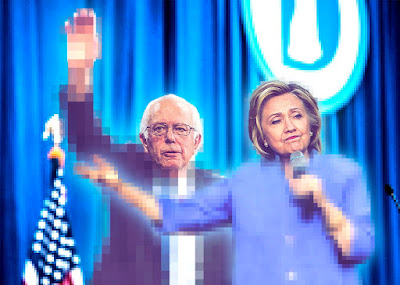 Put aside all the jokes about Donald Trump's hair and bombast, Ben Carson's hatred of Muslims, John Ellis Bush's floundering campaign, and Carly Fiorina's utter failure at her last job, 10-11 years ago (no, not enough jokes about that one). When all is said and done and Marco Rubio (or some other candidate who has been a loyal Republican and held office) is nominated, the Republican freak-show unfolding in public will enable the mainstream media to portray the GOP nominee as a moderate reflecting mainstream values.

Mediate exults that the few people who will experience virtual reality watching the debate "will be able to feel like you’re really there in the room with Hillary Clinton, Bernie Sanders, and other people you haven’t bothered to learn the names of yet." However, it's no bargain for the candidates, who are being played for suckers not only by CNN, but by the DNC chairperson who had to have signed off on this. If she were a Republican operative the last few years, she couldn't have done a better job.