The Response Action Network each week asks "our newsletter readers what they think about the issues facing our nation." From its website: 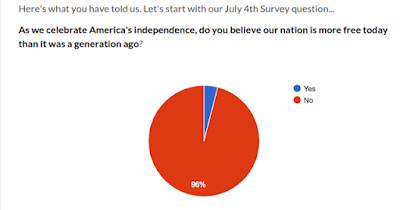 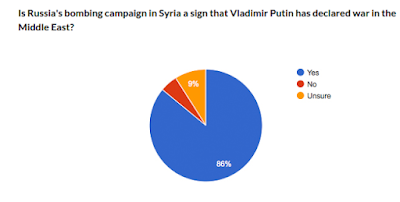 Digby comments "in case you haven't noticed, the Republicans are really eager to get their war on. It's really what they love."

The Response Action Network doesn't make it clear whether these questions, among the fourteen (14) posed, were asked only of Republicans.  However, there are at least three reasons to question Digby's conclusion, two aside from the realization that only two of the questions posed are related to war.

One of those is Lindsey Graham.  The South Carolina senator has called for "pulling the caliphate up from the roots" with the deployment of 20,000 USA soldiers to Iraq and Syria.  The only candidate sufficiently specific, bold, and reckless to advocate ground forces, Mr. Graham is at less than 1% in GOP presidential preference polls.

That certainly doesn't prove that the popular base of the Republican Party disagrees with Graham about the Mideast. In fact, remarkably, most Americans- and an overwhelming majority of Republicans- want to send ground soldiers to fight ISIL in Syria and Iraq. But it is very likely that most Republicans are not especially motivated by the issue of Mideast policy or foreign policy generally.

That is probably a factor. Additionally, though, some of those Republicans may not be aware that Graham thinks as they do about a military solution in the region.   Many are startingly ignorant of political issues.   Recall that a few weeks after the 2012 elections Public Policy Polling found

that 49 percent of Republican voters believe that ACORN stole the election for President Obama. That's down from the 52 percent who thought that ACORN stole the 2008 election, although as PPP points out, the decline is "smaller than might have been expected,given that ACORN doesn't exist anymore." Indeed, the community organizing NGO shut down in 2010 under relentless pressure from Republicans....

There are other, less remarkable, examples of Republican voters not having a clue. They include most of them being unaware that health care costs have risen more slowly than previously since enactment of the Affordable Care Act. A more notorious example is of Republicans believing the President of the United States was not born in the USA.- yet, as Hendrik Hertzberg once wrote

The dismaying truth is that birtherism is part of a larger pattern of rejection of reality that has taken hold of intimidating segments of one of the two political parties that alternate in power in our governing institutions. It is akin to the view that global warming is a hoax, or that the budget can be balanced through spending cuts alone,or that contraception causes abortion,or that evolutionis just another theory, on a par with the theory that the earth is six thousand years old.

Supply-side economics. Planned Parenthood. Climate change, childhood immunization. It's not only war and peace, and probably not primarily that, but across-the-board a stunning and often willful, ignorance of facts.