The  budget proposal from the Trump Administration has generated considerable and justified opposition, even outrage, because of the evidently harsh and heartless reductions to worthwhile programs. Elimination of Meals on Wheels, which is funded by the Community Development Block Grant program, has been a particular flash point. Wiping out the Appalachian Regional Commission is particularly ironic, given Trump's overwhelming support among down-market whites in that area. And ripping out the heart of  programs which aid people while jacking up the Pentagon only makes it more obscene.

But other cuts are even more insidious because of what they portend. President Trump

is proposing to shift oversight of the U.S. air traffic control from the federal government to an independent group, according to budget documents released on Thursday.

Trump, who called the U.S. air traffic control system "obsolete" in a meeting with airline executives last month, is proposing $16.2 billion for the Department of Transportation's discretionary budget for fiscal year 2018, a reduction of 13 percent.

Some Transportation Department budget items are paid through the highway gas tax fund.
The document says Trump's plan "initiates a multi-year reauthorization proposal to shift the air traffic control function of the Federal Aviation Administration to an independent, non-governmental organization."

finishing the work that Reagan started in 1981, and adapting the system to a philosophy that has worked so very well in the prison system and in education. Speaking of which, the Department of Education is taking a 13.5 percent cut, but there's going to be $1.4 billion shifted over into various charter and voucher schemes that have proven worthless in practice, but that warm the heart of Betsy DeVos, our anti-public-education Secretary of Education. Pell Grants also take a whack.

Privatization of essential functions has reared its ugly, inefficent head in education, prisons, and now- if the GOP gets its way- the skies may become as dangerous as, well, our water.   Donald Cohen, founder and executive director of In the Public Interest, writes that the Pittsburgh

water utility was laying off employees in an effort to cut costs. By the end of the year, half of the staff responsible for testing water throughout the 100,000-customer system was let go. The cuts would prove to be catastrophic. Six months later, lead levels in tap water in thousands of homes soared. The professor who had helped expose Flint, Michigan’s lead crisis took notice, “The levels in Pittsburgh are comparable to those reported in Flint.”

The cities also share something else, involvement by the same for-profit water corporation. Pittsburgh’s layoffs happened under the watch of French corporation Veolia, who was hired to help the city’s utility save money. Veolia also oversaw a change to a cheaper chemical additive that likely caused the eventual spike in lead levels. In Flint, Veolia served a similar consulting role and failed to detect high levels of lead in the city’s water, deeming it safe.

"High levels of lead exposure," Kevin Drum noted in February of 2016, "are associated with aggressivity, impulsivity, ADHD, and lower IQ." Two months later, researchers published a paper demonstrating that homicide rates in American cities from 1921 through 1936 closely correlated with the likelihood that the jurisdiction had installed lead water pipes in the late 19th century.  As Drum (crediting graphic below to researcher Rick Nevin) already had summarized

We now have studies at the international level, the national level, the state level, the city level, and even the individual level. Groups of children have been followed from the womb to adulthood, and higher childhood blood lead levels are consistently associated with higher adult arrest rates for violent crimes. All of these studies tell the same story: Gasoline lead is responsible for a good share of the rise and fall of violent crime over the past half century.

Crime rates fell a couple of decades after lead was taken out of gasoline (especially in the big cities, which had the highest concntration of automobiles) and will rise after lead is reintroduced as a short-term cost-cutting measure in cities whose water systems have been conquered by privatization.

In a similar manner, airplane accidents have dropped dramatically over the decades, a trend likely to be reversed if the transportation scheme, a solution in search of a problem, in this budget is adopted.  It is not, of course, the only problem with this horrendous budget but demonstrates one of the prime objectives of this President and his Party, one which sacrifices  American citizens for the profits of the well-heeled. 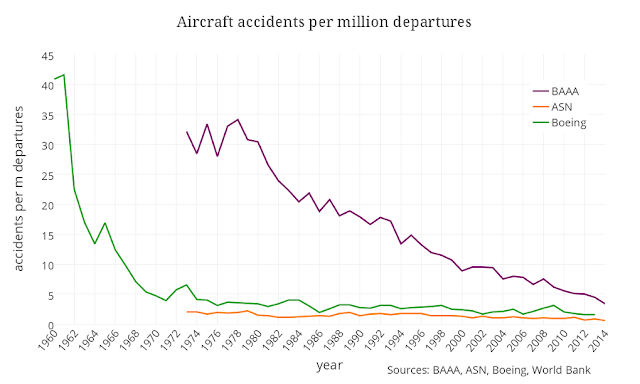