A Passel Of Moderates

Rather, it pertains to a claim made by Digby in her piece appearing today, March 31, 2017. She writes

On “MTP Daily,” Michael Needham of Heritage Action called the health care bill a disaster, saying, “This is a great opportunity to take a pause and get the policy right and that is what the House Freedom Caucus is doing. Talk about grown-ups, they’re the one who are saying, ‘We want to get the policy right, we’re willing to negotiate,’ and it’s the moderates who say they literally won’t pick up the phone if they call.”

The bill erases a regulation imposed by former President Barack Obama that lets states deny family planning funds to an organization only if it is incapable of providing those services.

Senate approval means the measure will be headed to President Trump, who was expected to sign it. The House voted its consent last month.

In a question with no mention of abortion, American voters oppose 62 - 31 percent cutting off federal funding to Planned Parenthood.

There are undoubtedly more Americans who realize Planned Parenthood refers for, and sometimes provides, abortions than realize that (extreme circumstances excepted), no federal funding is permitted for abortions (chart below from Planned Parenthood of Michigan via Vox).  Unless people are aware of the latter retriction, it is difficult to determine the breadth and  depth of support for the organiztion. 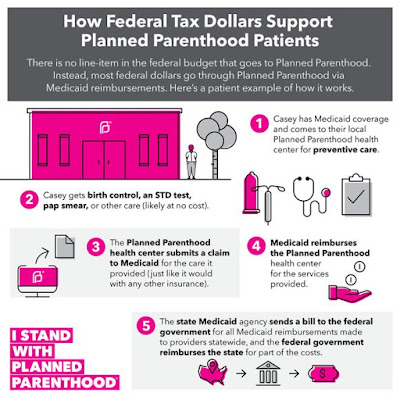 But, okay: we'll fight with one hand tied behind our back and ignore the 80% to 12%. Even with some people believing Planned Parenthood gets federal funds for providing abortions, twice as many respondents opposed cutting off funding than supported eliminating funding..

The congressional vote was a vote for extremism and was opposed by two GOP Senators and less than 3% of its House caucus. Digby was wrong, unreasonable and intolerant when she suggested no House Republican can be considered moderate. Almost 3% can.