Politico's Susan B. Glasser interviewed former journalist Elizabeth Drew, who authored Washington Journal, a "real-time diary" of the 2973-1974 investigation into the Watergate affair.  Now 81, Drew has some wise observations, and one not-so-wise.

if anything, Drew has come to believe that the Trump investigation could yield even more serious abuse of power or failure to execute the office than the years’ worth of Nixon probes. What’s more, the Russia scandal, she says, “is in many ways more complicated than Watergate was,” with billionaire Trump’s finances and those of his wealthy son-in-law, Jared Kushner, still to be examined, and multiple, rapidly proliferating lines of inquiry.

Both because the activities of this President (and of his family) before and after inauguration are far more serious than that of Richard Nixon, and the vastly more complex nature of the scandal, Drew counsels patience, warning

This cannot be a rush to judgment. It’s a huge thing to try to decide about the viability of a president. That’s an awesome thing if you think about it and if anything is going to be done about whether he remains president, it has to be done slowly, carefully, with some bipartisanship.

Bipartisanship is critical if for no reason other than that the GOP controls both the House and the Senate, as well as holding down leadership of the Department of Justice.  However

“My stupid theory of the case is that they’ve done such dumb things since he was inaugurated and the dumbest of all was that historic night when he fired the FBI director. Now, Nixon was a much smarter man than Trump is. Nixon read books. Nixon thought. Nixon thought about policy. You could have a coherent conversation with Richard Nixon,” Drew says. “But they both made the same mistake, which was firing your prosecutor. That was really stupid.”

But therein lies a critical distinction.  President Nixon wanted special prosecutor Archibald Cox fired. After Attorney General Elliot Richardson refused to do so, Richardson was fired and Assistant Attorney General Wiliam Ruckelshaus was ordered to can Cox.  Ruckelshaus refused and was either fired or resigned, at which point it fell upon Solicitor General Bob Bork to dismiss Cox, which he unflinchingly did.

But Nixon- unlike President Trump- was not so unwise as to fire acting FBI director L. Patrick Gray, who

helped Nixon cover up the Watergate scandal. White House officials gave him documents related to the Watergate break-in and Gray shredded them to hide the evidence.

Gray resigned after his actions were discovered.

President Trump did  something far more foolish. Nixon dismissed- indirectly- the Democratic investigator, Democratic lawyer Archibald Cox, who had been acting as a prosecutor. Trump, however, directly fired Republican James Comey, who despite being an attorney, is a big man identified with law enforcement and whose reputation for integrity was prized.

A couple of months ago, there was widespread speculation that the President would order Deputy AG Rosenstein to fire Robert Mueller, the lawyer investigating the Trump cabal.

Trump balked, a major tactical error. Shortly afterward, Mueller proceeded to assemble what has been described as "a prosecution team with experience going after everything from the Mafia and Enron to al Qaeda and President Richard Nixon" and as "perhaps the most high-powered and experienced team of investigators ever assembled by the Justice Department."

Despite revelation of the June 9, 2016 meeting demonstrating at least an attempt to collude with Russians, Trump could still order Rosenstein to dump Mueller. The Deputy AG probably would refuse and the assignment fall to- well, to whomever Trump wants it to, and it would  be someone who would do his bidding. There would be comparisons, apt and otherwise, to October 20, 1973 but probably with more complicated repercussions.

"It was a very different kind of politics then. Bipartisanship was not the oddity. It was really the norm,” Drew told Glasser.  Because politics currently are so polarized and Trump's hard-core base would remain with him even after comparisons to the Saturday Night Massacre, few of Trump's supporters would drop off.

Contrast that with  the likelihood- that Mueller's excellent cadre of lawyers, now including Preet Bharara, will open up Donald J. Trump's huge walk-in closet filled with skeletons. At that point, simple extrication from the presidency would be a relatively favorable outcome for the head of a corrupt family enterprise, now also an incomparably compromised President. 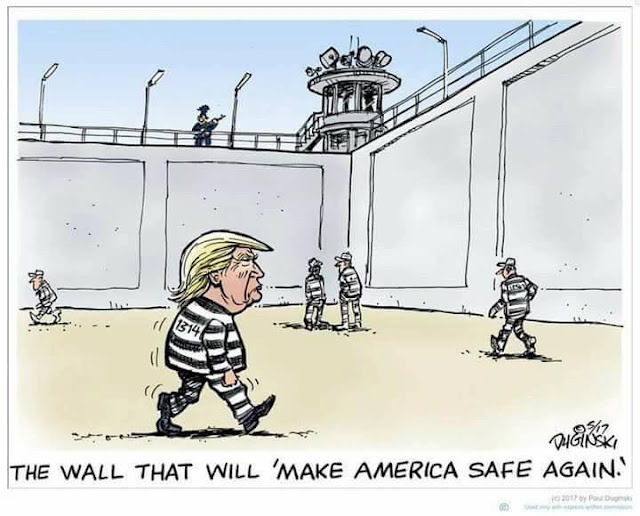