Dana Milbank is not a shill for the Democratic National Committee nor even parial to the corporatist bent of the mainstream of the Party, which has nominated the likes of Barack Obama and Hillary Clinton for the office of the presidency. We know this in part because he refers not to "Bernie Bros" but to "Bernie Bros and sisters," choosing not to join in the criticism of  the bros for allegedly being racist and sexist.

to force Democrats to take some kind of single-payer purity oath would set back the cause. Democrats need to pick up 24 seats to take control of the House, yet there are only 23 Republicans in districts won by Clinton — and only eight of those were won by President Barack Obama in 2012. There are a dozen Democrats in districts Trump won. In such swing districts, it would be suicidal to pledge support for something Republicans will brand as socialism.

It is debatable that Republicans would characterize the "Medicare for All" Democrats would advocate, as "socialism," even within those swing districts. However, the Democratic National Committee need not enforce a "purity test" on Democratic candidates there. It might be enough for the Party simply not to take an active role in quashing single-payer advocates, and let nature (or Democratic primary voters) take its course.

Fearing voters would in a general election turn against a Democrat advocating single-payer, Milbank writes

A Pew Research Center survey in June found that while a majority of Democrats (52 percent) favor single-payer health care, only 33 percent of the public does overall. A Kaiser Health Tracking poll in June had better results: 53 percent of the public favored single-payer coverage. But Kaiser found that opinions were “malleable,” and that if, for example, respondents heard single-payer coverage would increase taxes, a majority opposed it.

The  first claim, though technically accurate, is a serious distortion of the poll results, as this reveals. Admittedly, Kaiser found supporters of single-payer malleable. But it observed also "when the plan is defined as one in which all Americans would get their insurance from a single government plan, support is similar when the plan was referred to as “Medicare-for-all” (57 percent in favor) as when it was referred to as “single payer” (53 percent)." 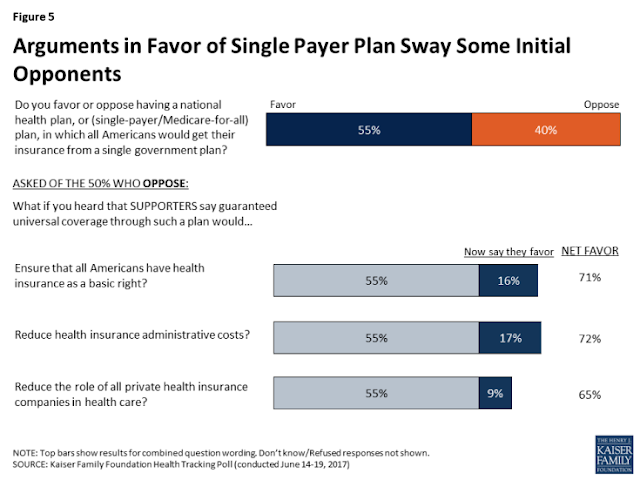 It’s not just about breakfast confections. The Bernie crowd has begun accusing freshman Sen. Kamala D. Harris (Calif.), a rising Democratic star, of being beholden to corporate money. Also in California, Kimberly Ellis, who ran for state Democratic chairman with the support of Sanders and lost in a close race to a former Hillary Clinton delegate, is refusing to concede and threatening to sue. Ellis told Adam Nagourney of the New York Times that the “Democratic Party is in many ways right now where the Republican Party was when the tea party took over.”

And that’s a good thing? Republican fratricide, instigated by tea- party purity police, made Trump possible and left the GOP unable to govern. This is what Sanders’s people would emulate.

Yes, it is a good thing. The tea party legacy has left the Republican Party in control of 36 governships, 66 of 99 state legislative bodies, the United States House of Representatives, the United States Senate, the Presidency, and a fifth or sixth reliable vote on the Supreme Court.

And one other thing it has done- left the GOP one Joe Manchin to Energy Secretary vote short of overturning the Affordable Care Act.

The Democratic Party didn't get here by advocating single-payer or even Medicare for All, which presumably would be a public-private mix approximating the current system for the elderly of Medicare plus the private Medicare Advantage. Insofar as health care has been an issue, Democrats have been routed by supporting an Affordable Care Act, whichis based on a proposal with a genesis in the conservative Heritage Foundation, later enacted in Massachusetts by GOP governor Mitt Romney.

It is a plan which was dubbed by Republicans- aware that President Obama was far less popular than polls indicated- as "Obamacare."  A program marginally better than the status quo empowered insurance companies to announce in October 2016- weeks before state and national elections- that their premiums would increase an average of 25% nationally.  (Happy Birthday, Hillary!)

The Republican "fraticide" cited by Milbank put the GOP within one vote of repealing Obamacare and replacing it with a health care program deeply unpopular with the American people. It would, further, be a mistake ever to count Mitch McConnell out, especially with speculation about Joe Manchin, whose seat would be filled by the Republican governor if Manchin leaves the Senate for the Department of Energy.

This "fraticide" has resulted in approval for the US Supreme Court of a far-right nominee. And were the same calamity to befall the Democratic Party, it would not yield as President a Democrat who has championed greed, racism, and sexual assault, publicly debated the size of his penis, claimed he was smarter than "the generals," boasted about his extreme wealth and intelligence, threatened to date his own daughter, and denied hero status to a prisoner of war because he was captured. Recall, too, that Donald Trump became president not by campaigning against left-wing Democrats but by running against a conventional, cautious, centrist Democrat, scourge of the "Bernie Bros,"  and  supporterof Barack Obama.

Significantly, Democrats now routinely acknowledge "we're not saingy Obamacare is perfect- it needs changes" because they realize the public realizes it is deeply flawed.  Reforming Obamacare is a marginal improvement upon the marginal improvement provided by the ACA.  Socialist Bernie Sanders isn't even advocating a pure single-payer system but instead "Medicare for All." With the popularity and proven effectiveness of our health services for the elderly, the least the Democratic Party should be able to do is to get behind a program calling for strengthening and extending Medicare.