As we have learned in the last few days, dealing with an impulisve egomaniac with a limited view of the rest of the globe can be very distrubing.

But enough about Donald J. Trump; let us consider Kim Jong-un. U.S. intelligence officials earlier this week confirmed a report, which North Korea first reported in early March, that it had miniaturized a nuclear warhead that can fit inside a missile. President Trump threated Pyongyang with an (apparently) nuclear attack if Kim were to speak again, after which the Korean President threatened to hit the island nation of Guam, whose residents are American citizens and in which lie a USA naval base and air base. Pyongyang now has threatened Guam again. 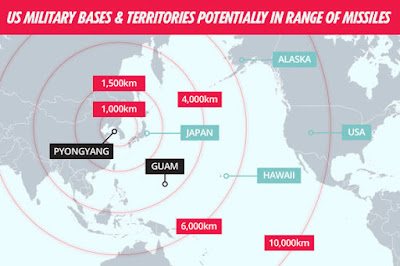 Trump then retweeted a Fox News story revealing classified information. Coincidentally or not

A North Korean plan to fire four missiles near the US Pacific territory of Guam will be ready for Kim Jong Un's consideration in days, state media has reported, as an unprecedented exchange of military threats between Washington and Pyongyang intensifies.

The intermediate-range missiles would be fired east and over Japan before landing around 30 to 40 kilometers (18 to 25 miles) off the coast of the tiny island if the plan is implemented, according to state-run KCNA. Guam is more than 3,000 kilometers from North Korea.

Mr. Trump is issuing an empty threat of nuclear war, which will further erode American credibility and deterrence, or he actually intends war next time Mr. Kim behaves provocatively. The first scenario is folly, but a United States decision to start a pre-emptive war on the Korean Peninsula, in the absence of an imminent threat, would be lunacy.

Folly is more likely. Recall, as The Washington Post has done for us

Initially, Trump appeared to think he could outsource the problem to China, a strategy deemed simplistic and naive by foreign policy experts who say Beijing has limited influence with the North and strategic interests that diverge from the United States’.

Leading up to a summit in early April with Chinese President Xi Jinping at Mar-a-Lago, his resort in Palm Beach, Fla., Trump bashed Beijing as not doing enough to rein in Kim’s government. But after his conversations with Xi, “I realized it’s not so easy,” Trump told the Wall Street Journal. “I felt pretty strongly that they had a tremendous power over North Korea. But it’s not what you would think.”

In a conversation with Philippines President Rodrigo Duterte, Trump called Kim “a madman with nuclear weapons,” and he asked Duterte whether Kim was “stable or not stable,” according to a transcript obtained by The Washington Post.

The United States has “a lot of firepower over there,” Trump boasted, including two nuclear submarines ordered to the region by the Pentagon.

But three days later, Trump told Bloomberg News that he would be “honored” to meet Kim “under the right circumstances,” opening the possibility of bilateral or multilateral talks. No sitting U.S. president has met with a North Korean leader.

In another interview with CBS News, Trump called Kim “a pretty smart cookie” and expressed admiration for the North Korean leader’s having assumed power “at a very young age” after the death of his father, Kim Jong Il.

“What is alarming to allies and probably confusing to China is that the statements are all over the map,” Rhodes said. “One day we’re conciliatory; the next day we’re threatening ‘fire and fury.’ ”

"Fury" may be the operative term inasmuch as the President of the United States of America exemplifies sound and fury, signifying nothing.

Trump depends on mainland China; then he's disillusioned.  He condemns Kim Jong-un; then he would be honored to meet the Korean leader, who is "a pretty smart cookie" and, better yet, an authoritarian.

Yes, because that's  how the highly insecure Trump always feels when he's questioned.  Panetta asks “And (Trump) this is a guy who, if he feels that, does he decide, 'OK, enough is enough?'"

Kim Jong-un presumably has observed that the President is all talk, no action. He may not realize there is a limit to how much he can threaten the USA, even with President Con Man.  At that point, Mr. Kim may strike and Donald Trump, fearing his manhood as never before, might go full lunatic.