Eleven months before the crook from Queens was elected president, Michael D'Antonio wrote

Trump's sense of entitlement has been affirmed throughout his life. In 1987, at a party marking the publication of Trump's book "The Art of the Deal," boxing promoter Don King turned to the crowd and proclaimed the arrival of Trump and his then-wife Ivana by saying, "Here's the king and the queen!" A few years later, when he appeared at an event at one of his Atlantic City casinos, an announcer bellowed, "Let's hear it for the king!" — and Trump burst through a large paper screen. When he visited the humble village of his Scottish ancestors he told his relatives that because of his TV show "The Apprentice," he was American royalty. "If you get ratings, you're king, like me. I'm a king. If you don't get ratings, you're thrown off the air like a dog."

And Trump does not believe he is superior because of hard work, upbringing, or education.  It's a case of nature over nurture, which helps explain why he is a classic racist. D'Antonio continued

Like history's monarchs, Trump believes that the qualities that make him successful are in-born. He once said he possesses a genetic "gift" for real estate development.

"I'm a big believer in natural ability," Trump told me during a discussion about his leadership traits, which he said came from a natural sense of how human relations work. "If Obama had that psychology, Putin wouldn't be eating his lunch. He doesn't have that psychology and he never will because it's not in his DNA." Later in this discussion, Trump said: "I believe in being prepared and all that stuff. But in many respects, the most important thing is an innate ability."

The racehorse theory of human development explains Trump's belief in his suitability for political leadership, despite the fact that he has never held office. He's absolutely convinced that America's problems will be solved by his God-given management skills, bankruptcies notwithstanding. You are either born with superior qualities — the right DNA — or you are not.

And it appears that Trump thinks that he himself is responsible for his God-given skills, now that

Residents of a small Alabama city, still reeling after deadly tornadoes devastated their corner of the state, said President Trump’s visit Thursday was “a godsend.”

He punctuated his trip at a Southern Baptist church in Opelika, Ala., with another religious overture, one that was distinctly on-brand: When asked, the president signed several of the churchgoers’ Bibles.

After Trump added his unique, frenetic signature to a 12-year-old boy’s Good Book, the crowd of onlookers erupted in applause, a pool report noted. One church volunteer, Ada Ingram, told the reporters that Trump’s visit was a blessing. Hopefully, it brings the community together, she said.

“I enjoyed him coming,” Ingram said. “I think it’s a godsend.”

Some experts said that any signature on or in a Bible, no matter the penmanship, should be frowned upon.

“Growing up in a religious home, it would’ve been seen as blasphemous as having someone signing your own name,” said Jamie Aten, an evangelical and psychologist at Wheaton College.

Aten, who specializes in the effects of disasters on the religious mind, said it’s common for disaster survivors to use the Bible to help make meaning of what happened. However, he said, he has never seen survivors bring Bibles for someone to sign.

“Maybe you penned your own name so people knew it was yours,” Aten said. “I’ve never seen anything like it.” 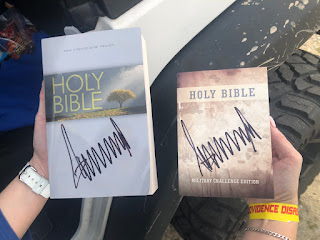 Making it just a little worse, the President with his indecipherable signature signed the cover of the Bibles. The best comment, however, came from Twitter: