Beginning at 7:33 of the video below, Critical Race Theory foe Christopher Rufo states accurately but irrelevantly

You can retreat to the defensible territory of saying it's just looking at the history of racism and society. But when you actively look at the specifics, they're telling kids that they are fundamentally racist because of the  color of their skin. They're telling people they should feel shame, guilt, and anguish because of their inborn characteristics and traits.

Nor is it controlling because it is "Creating Racial Tension," as this young woman points out: 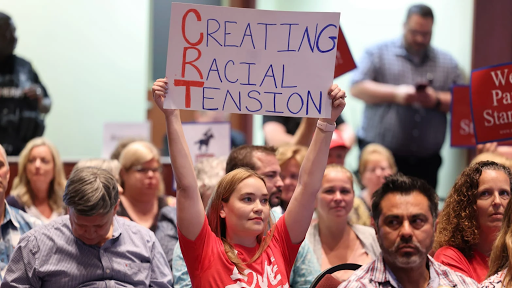 Some of us are deeply influenced by the academic discipline of critical race theory and its critique of racist structures and admire the 1619 Project. Some of us are skeptical of structural racist explanations and racial identity itself, and disagree with the mission and methodology of the 1619 Project. We span the ideological spectrum: a progressive, a moderate, a libertarian and a conservative.

The writers take aim at legislation recently approved in Tennessee, Oklahoma, Iowa, Idaho, and Texas severely restricting what can be taught in public schools and/or colleges even

Though some of us share the antipathy of the legislation’s authors toward some of these targets, and object to overreaches that leave many parents understandably anxious about the stewardship of their children’s education, we all reject the means by which these measures encode that antipathy into legislation.

They do so because

the very act of learning history in a free and multiethnic society is inescapably fraught. Any accurate teaching of any country’s history could make some of its citizens feel uncomfortable (or even guilty) about the past. To deny this necessary consequence of education is, to quote W.E.B. Du Bois, to transform “history into propaganda.”

What’s more, these laws even make it difficult to teach U.S. history in a way that would reveal well-documented ways in which past policy decisions, like redlining, have contributed to present-day racial wealth gaps. An education of this sort would be negligent, creating ignorant citizens who are unable to understand, for instance, the case for reparations — or the case against them.

Because these laws often aim to protecting the feelings of hypothetical children, they are dangerously imprecise. They are "broad, vague laws violate due process and fundamental fairness because they don’t give the teachers fair warning of what’s prohibited

I suspect the laws are largely a proxy, yet not for racism, nor even for ginning up the culture war. Rather

They are speech codes. They seek to change public education by banning the expression of ideas. Even if this censorship is legal in the narrow context of public primary and secondary education, it is antithetical to educating students in the culture of American free expression.

There will always be disagreement about any nation’s history. The United States is no exception. If history is to judge the United States as exceptional, it is because we welcome such contestation in our public spaces as part of our unfolding national ethos. It is a violation of this commonly shared vision of America as a nation of free, vigorous and open debate to resort to the apparatus of the government to shut it down.

It's an effort to shut off debate. In schools as in the public square and on social media, vigorous debate is a societal good and its suppression, not coincidentally, would undermine public schools. Ironically, both critical race theory and the effort to ban teaching it are guided by a destructive desire to disregard these important precepts of a democratic society.

Update: This latest move, which was announced by the NEA as I was writing this post, can only embolden the state initiatives criticized by the op-ed writers. Still, theirs was a wise and important argument.