By contrast, on Tuesday, Robert Reich, rarely if ever right (wing) but invariably correct, had noted

You won't get any of this from the  leading liberal/progressive blogs or journalists today.     Not from Reich.   Nor Glenn Greenwald.    Nor Charles P. Pierce.   Nor Daily Kos, which even offers a petition to sign supporting the Administration's decision.   Nor, especially, the Center for American Progress, the de facto media arm of Organizing for America.

Today, they will not be writing about globalization or automation- or offshoring, outsourcing, privatization, or withering criticism of government employees.    They will not point out that (as did Robert Oaks a few months ago) there officially are 3.39 unemployed individuals seeking work for every job available, with a ratio of 6.07 to 1 if we use a broader definition of unemployment.     While they pause to praise the President's decision, they will, for the time being, also stop writing about Republican class warfare while the GOP continues its (largely successful) effort to pit the poor against the working and middle classes.

the median value of real (inflation-adjusted) family income before taxes fell 7.7 percent; median income had also fallen slightly in the preceding three year period (figure 1).    The decline in median income was widespread across demographic groups, with only a few groups experiencing stable or rising incomes.   Most noticeably, median incomes moved higher for retirees and other nonworking families.

Median net worth (chart from the Federal Reserve Board via economicpopulist.org) fell dramatically despite rising for retirees and other nonworking families- the Americans who derive their income from outside the employment sector. 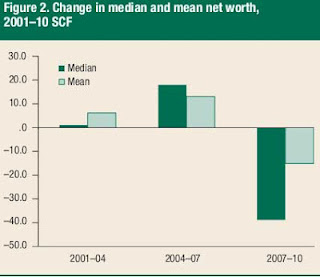 Continuing a 30-35 year trend (interrupted periodically), median family income declined despite rising for retirees and other nonworking families- the Americans who derive their income from outside the employment sector.        For individuals competing for jobs, the trend is clear, and downward, as reflected in the decline of middle-income private sector jobs as a share of total employment, graphically depicted by the decline of the empire.com: 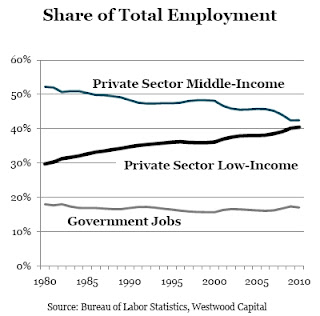 Admittedly, those factors- including "free" trade, automation, privatization, off-shoring, outsourcing,  privatization, a stagnant minimum wage, and union busting- usually celebrated by conservatives play a greater role in the destruction of the job market, downward pressure on wages, and subsequent decline of the middle class than does immigration, legal or illegal. And, today (June, 2012) as Granholm assumes, our biggest "dilemma" might in fact be economic growth.

Still, at some point the economic slump will be in our rear view mirror with politicians, pundits, and media all cheering a roaring economy.    All factors, including illegal immigration, will continue to take their toll on jobs and wages, with most ignored by the right, and illegal immigration by the left.

We have a net loss of immigrants right now, with a massive outflow of people who can't find work here. I don't think they're contributing to the current problem - outsourcing is.

As you note, there recently has developed a net loss of immigrants, partly because of our economic slump and partly because of increased border enforcement. I do think, however, that immigration contributes to an increased worker:job ratio, hence to downward pressure on wages. Admittedly, outsourcing and other disturbing policy choices probably are more significant factors.