Writing in The Washington Post in late April, Thomas Mann and Norman Ornstein described the conservative shift in American politics.      Both sides are not equally to blame for the gridlock in Washington, they noted, as

It is clear that the center of gravity in the Republican Party has shifted sharply to the right. Its once-legendary moderate and center-right legislators in the House and the Senate — think Bob Michel, Mickey Edwards, John Danforth, Chuck Hagel — are virtually extinct.

The post-McGovern Democratic Party, by contrast, while losing the bulk of its conservative Dixiecrat contingent in the decades after the civil rights revolution, has retained a more diverse base. Since the Clinton presidency, it has hewed to the center-left on issues from welfare reform to fiscal policy. While the Democrats may have moved from their 40-yard line to their 25, the Republicans have gone from their 40 to somewhere behind their goal post.

Some refuse to acknowledge the obvious.     A font of conventional wisdom, Chris Cillizza, argued "a look at the recent departures from the Senate Democratic ranks suggests their number of moderates is also very much on the decline.... and it's clear that the centrist Democratic ranks have taken a major hit over the last four years too."

Yet the chart (from Jon Perr, who credits political science professors Keith Poole and Howard Rosenthal) below, in which the closer to 1.0 the line gets the more conservative the vote, demonstrates that the ideology of congressional Democrats has changed little over the years while Republican votes have become sharply more conservative over the past 45 years. 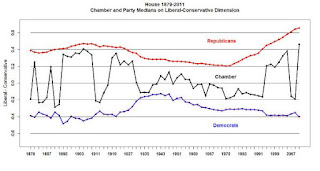 Cillizza, further, gives a pass to congressional Republicans for casting their conservative votes because, he rhetorically asks, "What if the Republican rank and files have grown more and more conservative over the past few decades, a progression that has forced its leaders to move to the right in order to, well, remain leaders?"    There is little advantage in holding accountable the politicians, important sources for journalists, when citizens can be blamed.

Moderate Democrats, however, are saluted by Cillizza and others for having the courage to rise above the liberal rabble and vote as centrists.    Mann and Ornstein note of such pundits

"Both sides do it" or "There is plenty of blame to go around" are the traditional refuges for an American news media intent on proving its lack of bias, while political scientists prefer generality and neutrality when discussing partisan polarization.   Many self-styled bipartisan groups, in their search for common ground, propose solutions that move both sides to the center, a strategy that is simply untenable when one side is so far out of reach.

Under President Obama's leadership, the Democratic party has listened to the "American news media intent on proving its lack of bias."     The President's signature legislative achievement (in danger of being struck down by the U.S. Supreme Court) bears a striking similarity to the health care plan stewarded to passage in Massachusetts by then-Governor Mitt Romney, reform itself based on the plan proposed by Rush Limbaugh's favorite think tank, the Heritage Foundation.    Proposed by a Democratic president whom party leadership already had vowed to defeat at virtually any cost, the legislation garnered zero (0) votes from the Gas and Oil Party.

Among the vocal opponents of the Affordable Care Act was Kentucky Senator Rand Paul, who told sympathetic interviewer Dustin Suggins

This is what the “grand bargain” idea was all about. Democrats think working with us on Social Security will bring a compromise. They think we want changes to Social Security and we will agree to bring taxes up. This is wrong-headed. We are not jumping up and down to reform entitlements; we want to fix them because they are broken. The Deficit Commission wanted a “grand bargain,” but the whole concept misses the point.

It's bad enough a Democratic president wants to 'reform' a healthy Social Security.   To Rand Paul, characteristic of his Repub colleagues, reform is not enough; it must be "fixed" by means-testing (turning an earned benefit into welfare) and raising the retirement age (effectively lowering benefits).     Raising the cap on income subject to taxation for Social Security or eliminating the cap so an individual with a $1,000,000 income pays more than one earning $106,800 simply cannot be considered.

The morning after defeating long-time incumbent Richard Lugar for the GOP nomination for U.S. Senate from Indiana, Richard Mourdock told MSNBC's Chuck Todd  "I certainly think bipartisanship ought o consist of Democrats coming to the Republican point of view."   Soon thereafter, perhaps aware that Chris Cillizza and others haven't figured it out yet, Mourdock told CNN's Soledad O'Brien "What I've said about compromise and bipartisanship is I hope to build a conservative majority in the United States Senate so that bipartisanship becomes Democrats joining Republicans to roll back the size of government, reduce the bureaucracy, lower taxes and get America moving again."

Mourdock should be happy.     The size of government and of the bureaucracy has declined, even in this period in which a spurt of employment in the public sector would have bolstered demand and jacked up the GDP, as in the previous three recessions.   Ezra Klein, from whom the first chart below is taken, explains

Since Obama was elected, the public sector has lost about 600,000 jobs.    If you put those jobs back, the unemployment rate would be 7.8 percent.

But what if we did more than that?   At this point in George W. Bush's administration, public-sector employment had grown by 3.7 percent.   That would be equal to a bit over 800,000 jobs today.  If you add those hypothetical jobs, the unemployment rate falls to 7.3 percent.


Mourdock and other Republicans should be overjoyed- and would be, if the President were not a Democrat- that federal taxes as a share of gross domestic product haven't been this low in 60 years,  as illustrated in the second graph below, from the Office of Management and Budget via Daily Kos. 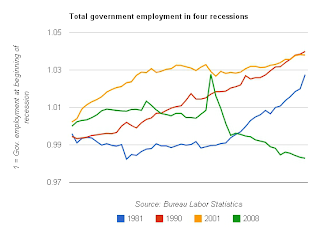 There is virtually no limit to the extremism the Repub Party can illustrate.    While ever-compromising Democrats are spanked by the Washington establishment for failing to compromise further, Republicans are "enabled," facing no penalty for staking out a continually more radical position.

Email ThisBlogThis!Share to TwitterShare to FacebookShare to Pinterest
Labels: bipartisanship