Who is this Barack Obama of whom Rush Limbaugh speaks?     Limbaugh on Friday shrieked

This is the Barack Obama the right seems to fear- big spending, business-destroying socialist.     However, this Obama, who has proposed in his 2013 cutting $360 billion from Medicare and Medicaid over the next ten years, does not exist.

Corporate moguls have complained that the "uncertainty" of federal regulations and tax policy have stifled job growth.     Yet, on April 9 The Wall Street Journal reported

Big U.S. companies have emerged from the deepest recession since World War II more productive, more profitable, flush with cash and less burdened by debt. An analysis by The Wall Street Journal of corporate financial reports finds that cumulative sales, profits and employment last year among members of the Standard & Poor's 500-stock index exceeded the totals of 2007, before the recession and financial crisis.

Deep cost cutting during the downturn and caution during the recovery put the companies on firmer financial footing, helping them to outperform the rest of the economy and gather a greater share of the nation's income.

As the chart below from MJ Perry demonstrates, U.S. corporations set a record by pulling down $1.5 trillion in profits in 2011.    Corporate cash holdings had risen to $1.24 trillion, 57% of it held overseas, by the end of the year.    And President Obama had added regulations at a slower rate than his predecessor, though many were more expensive, due primarily to inflation.   Profit margins were at a higher rate than at any time in the past 65 years. from February 2010 (the month the labor market "bottomed out") to January 2012, the United States experienced a net increase in total nonfarm employment of more than 3.2 million jobs while state and local government employment fell by 438,000.   Over this period, every major sector of the economy experienced net growth in jobs except the public sector. 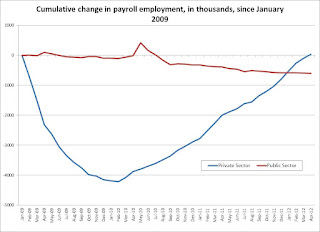 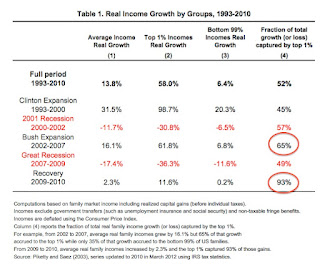 Not only has the overall federal, state, and local tax burden dropped to its lowest level in several decades, the federal tax burden alone is unusually low.  U.S. News notes the Urban-Brookings Tax Policy Center (echoing findings of the Congressional Budget Office), found "in 2010 a typical family of four paid 4.6 percent of its income in federal income taxes- the second lowest percentage during the past 50 years."     Selena Maranjian reports that in 2011, the average tax rate (according to the CBO), at 14.82%, was the lowest since 1950 while the corporate tax rate (according to the OMB) had fallen to 1.3% from 7.2% in 1945.

Tax rates are down.   The private sector is routing the public sector.    As worker productivity increases, corporate profits grow and then are shipped overseas.   The percentage of wealth held by the 1% and the 10% continues to grow.     And the economy stagnates.   Coincidence?  I think not.