It's What Economists Call Externalities

It isn't really this difficult, is it?    Evidently, sometimes it is and sometimes it isn't.   It's hard to follow the infographic below from Reason magazine- but that's probably the point.    (For a larger, more readable chart, click here.)  It's What Economists Call Externalities 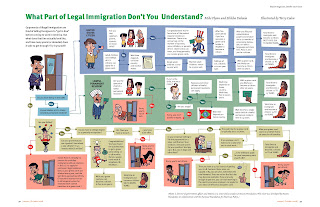 The ironically-named libertarian Reason, existing in an Ayn Rand world of fantasy, entitled its convoluted chart, first published in October, 2008, "what part of legal immigration don't you understand?' as a response to opponents of illegal immigration.   One supportive blog in December 2010 accompanied  the chart with the comment "a common refrain from those who think that the answer to fixing our broken immigration system is deporting 12 million people.    There is no effort to understand the complexity, the unfairness, or the harsh realities of how our immigration system works."

On whose part is there "no effort to understand... how our immigration system works?"    It would not take a decade or so to become a U.S. citizen if there were sufficient bureaucratic personnel- public employees- involved in the process.     Now young people who arrived in the U.S.A. illegally but did so as children, have earned a high school degree (or G.E.D.) or served in the military, and have no criminal record will join an overburdened immigration system.   Perhaps the number of individuals working to process requests from these individuals and those caught in the backlog will be increased by a president who is running for re-election and sensitive to GOP charges that his nefarious goal is to expand the size of government.    Or perhaps not.

making sure the system fails these kids is a great way to dissuade their parents from crossing that border. (Bonus stat: Fifteen percent of children in immigrant families have no health insurance! And a million “illegal” children are ineligible for coverage from a public plan or from receiving coverage through the health care law’s exchanges. That’ll teach those scofflaw children.)

But under the directive of the DHS, the 'illegal children' still will be" ineligible for coverage from a public plan or from receiving coverage through the health care law's exchanges." The President himself emphasized the minimalist nature of the change, labeling it merely a "temporary, stopgap measure."      It is not "not a path to citizenship" but denies the full benefits of membership in the American community upon "talented, driven, patriotic young people" whom, he assured them, have "done everything right your entire life, studied hard, worked hard, maybe even graduated at the top of your class."

It is not surprising, then, that a kindler, gentler means of expanding the nation's supply of workers has evoked sympathy from Haley Barbour, Alberto Gonzalez, Marco Rubio, and William Kristol, Republicans otherwise unknown for their deep affection for ethnic minorities.Pareene notes

Which is not to say America doesn’t happily accept your cheap, unregulated labor! It’s actually pretty win-win for the “pro-business” crowd because they have a huge pool of manual laborers with virtually no legal protections at all, and that pool has no right to organize — and no opportunity to win the right to organize for voting for people to represent their interests in the legislatures!
The Obama administration’s plan is actually perfect for conservatives because it grants people the right to work but not to enjoy many of the other various benefits of citizenship, like “voting for Democrats.”
The Administration's new approach may prove relatively insignificant, especially in the unlikely event a Repub presidential nominee is elected in November and chooses to discard it. Or it may prove crucial in eventually leading to a path to citizenship.   Beware, however, of the possibility that neither will apply, creating a class of residents which does not ever quite attain status as Americans.