Scarborough appears rather disgusted with his own party's presidential nominee, "neither a true conservative nor a courageous moderate" but "just an ambitious man" who "refuses to stick his neck out and take a stand on the critical issues of our time."   By contrast, in early 2008, he said Barack Obama "doesn't attack Republicans, he doesn't attack whites and he never seems to draw these dividing lines that Bill Clinton (does)."   (Imagine that- a black man who doesn't attack whites!)

Barack Obama’s acceptance speech in Charlotte exposed him as an intellectually exhausted politician. The man who brought Hope and Change to the Democratic National Convention four years ago exposed himself in Charlotte as a guy who has no new ideas and no clue where he wants to take the country over the next four years. Obama is now reduced to mindlessly repeating the same tired lines he trotted out on the campaign trail in 2008. He had somehow morphed from the political equivalent of a young Elvis rocking Mile High Stadium four years ago to becoming the fat, sweaty singer who haunted Vegas showrooms in the months before his most inglorious expiration in the summer of 1977.

Barack Obama, however, was not Scarborough's first love, or even the most prominent one.   That honor would go to two-term President Ronald(6) Wilson(6) Reagan(6), who along with Margaret Thatcher (Scarborough falls in love with women, too)

Ronald Reagan did, in fact, dare to tell voters that he would cut their taxes.  He did not, however, dare to tell them he would explode the debt, undermine the nation's manufacturing base, or eviscerate the middle class.    Donald Barlett and James Steele note that after Congress passed legislation to stem with higher taxes the loss of thousands of textile jobs to imports

President Ronald Reagan vetoed the bill, calling it protectionist and a violation of free trade.  "We want to open markets abroad, not close them at home," he said in a refrain that had become distressingly familiar to American workers in many industries.  Even though he had just killed a bill that would have saved jobs, Reagan sought to assure textile employees that he was on their side and insisted that he would not "stand bt and watch American workers lose their jobs because other nations do not play by the rules."  In fact, that's exactly what he did.  There were 756,000 textile industry workers in 1984 when Congress and Reagan took up the issue of textile tariffs. By the time he left office, the number was down to 728,000.  In 2011, only an estimated 120,000 worker were left, according to the Labor Department.

As Barlett and Steele describe, it wasn't only the 40th President who pursued free trade policies which eliminated hundreds of thousands of middle class jobs in the U.S.A.  Still, as Thom Hartmann explained four years ago

Scarborough criticizes the growth of debt under President Obama and laments Romney's failure to advance a plan to reduce it.   But under the president so admired by Scarborough, the national debt nearly tripled as the former governor reversed  the post-war pattern of reduction of  the debt as a percentage of GDP.

Nonetheless, Reagan's assault on the unions had an even greater impact upon the tax-paying middle class.   In August, 2011 The New York Times editorialized

THIRTY years ago today, when he threatened to fire nearly 13,000 air traffic controllers unless they called off an illegal strike, Ronald Reagan not only transformed his presidency, but also shaped the world of the modern workplace.

More than any other labor dispute of the past three decades, Reagan’s confrontation with the Professional Air Traffic Controllers Organization, or Patco, undermined the bargaining power of American workers and their labor unions. It also polarized our politics in ways that prevent us from addressing the root of our economic troubles: the continuing stagnation of incomes despite rising corporate profits and worker productivity.

By firing those who refused to heed his warning, and breaking their union, Reagan took a considerable risk. Even his closest advisers worried that a major air disaster might result from the wholesale replacement of striking controllers. Air travel was significantly curtailed, and it took several years and billions of dollars (much more than Patco had demanded) to return the system to its pre-strike levels.

That legacy remains with us.  The Times editors observed

By 2010, the number of workers participating in walkouts was less than 2 percent of what it had been when Reagan led the actors’ strike in 1952. Lacking the leverage that strikes once provided, unions have been unable to pressure employers to increase wages as productivity rises. Inequality has ballooned to a level not seen since Reagan’s boyhood in the 1920s.

As the first graph below (from the Pew Research Center) displays, since 1980 the middle class share of national income fell from 60% to 45% while that of the upper class increased from 29% to 46%, an appreciable portion of which occurred during the Reagan years.    The second graph below (from the Center for American Progress) illustrates the decline in middle class share of national income paralleling the decline in union membership. 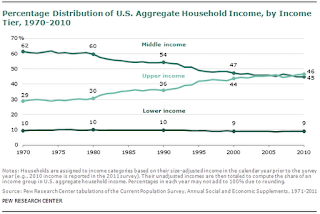 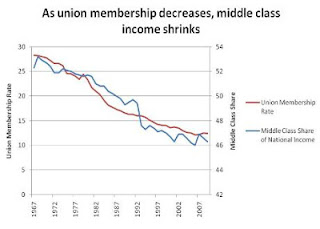 That's how it apparently is with some love affairs.  What he does to you, how he treats you, pales in significance next to those sweet little things he, like Ronald Reagan, whispers in your ear.