It's Just Not So


President Obama's speech accepting his party's re-nomination wasn't the rock-'em, sock-'em address given the previous evening by Bill Clinton, but it was still better than the vast majority of politicians would give.   It wasn't vintage Obama and wasn't his best, though that is not unlike saying:  it wasn't the 1927 Yankees.

Amidst generally progressive speeches given by the former and the current presidents, there was one disturbing myth both peddled.    After conceding "of course we need more new jobs," Clinton claimed

But there are already more than 3 million jobs open and unfilled in America, mostly because the people who apply for them don't yet have the required skills to do them. So even as we get Americans more jobs, we have to prepare more Americans for the new jobs that are actually going to be created. The old economy is not coming back. We've got to build a new one and educate people to do those jobs.

The following evening, Obama, addressing education rather than- in Clinton's case- employment, contended

There are two competing theories explaining unemployment.   Most economists, including virtually all Keynesians and many monetarists, believe it results primarily from lack of aggregate demand, as consumers reduce their spending and businesses reduce their purchases from each other, leading businesses to cut employment.  However, some economists maintain that structural, rather than demand, are the most important factors.   This view is held most prominently, Dylan Matthews explains, by Nobel laureate Michael Spence, who argues

too many of America’s jobs are in  ”non-tradable” sectors like nursing or construction. That leaves our “tradable” sector, which produces goods and services for export, at a disadvantage at a time when other countries’ tradable sectors are growing. We need to invest heavily in education to make our tradable sector more productive and increase employment there, Spence argues. Sachs agrees that increasing the workforce’s education and skill level is more important than spurring greater demand.

Matthews notes, however, that

This isn’t the main reason unemployment is high now. A new paper (pdf) from New York Fed economists Aysegul Sahin, Joseph Song, Giorgio Topa and Giovanni L. Violante finds that a skills mismatch is responsible for at most a 1.5 percentage point increase in the unemployment rate during the recession. Given that unemployment shot up by about 5 points, that leaves the other 3.5 percentage points explained by a shortfall in demand. What’s more, the effects of skill mismatch only really appear during the recession: 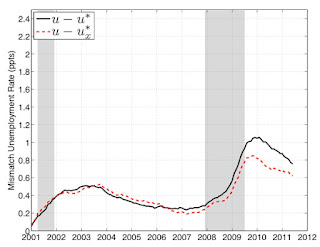 Both lines show the increase in unemployment for each period caused by a skills mismatch. The red dotted line adjusts for differences between economic sectors, while the black line doesn’t. In either case, both measures find that skills mismatches have a very large effect only in the aftermath of the 2001 and 2008 recessions, whereas in 2007 mismatches only increased unemployment by about 0.2 percentage points. This suggests that addressing the underlying lack of demand would prevent mismatches from hurting unemployment. This makes intuitive sense. When there are a lot of jobs due to healthy demand, the likelihood that a given person can find a job that matches their skill set is much higher. When there’s low demand and jobs are scarce anyway, chances of finding a job matching one’s skill set are low.

Matthews cites a paper by Edward Lazear, a Stanford economist and former chairman of the Council of Economic Advisors, and John Speltzer of the Census Bureau in which is presented an index of structural mismatch.    They found it increases dramatically during economic slumps but is currently at its pre-recession level.     According to Matthews, Lazear and Speltzer, as well as Jesse Rothstein of Cal-Berkeley in another study,  "also found that unemployment shows the same trends across education groups, indicating that what’s causing unemployment is low demand, not that people don’t have the skills necessary to be employed."   If structural factors were dominant, unemployment would have fallen far more for individuals with little education than for college graduates, which hasn't occurred.

Rothstein believes, additionally, that if employers were having trouble finding workers with adequate skills- the structural theory- they probably would be increasing wages which, as the graph (from Rothstein) below indicates, they most surely haven't. 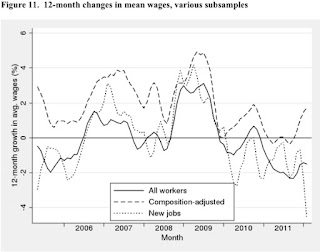 Matthews concludes that these studies "reflect a consensus among most economists that what we’re seeing is unemployment due to slow growth and inadequate demand for goods and services, not due to a lack of skills. Investing in education may be a good goal on its own merits, but it won’t solve the unemployment problem. "

(Class warfare alert) At all the best parties, Friends of Bill likely will be congratulating the former President on implying that the unemployment problem lies with workers, not their businesses, or the businesses their friends run.  However, Obama's remark will not satisfy the corporate chieftains who get so offended when the President suggests that the Founding Fathers didn't mean to shut out all but the wealthiest from American society.   As demand increases and the economy continues to improve, neo-liberal shibboleths will provide those who like to call themselves the "job producers" the excuse to limit new hiring and keep wages low for existing employees.

We've had Republicans who excuse corporate heads for taking huge bonuses, planting their money abroad, outsourcing jobs, and blowing a hole in the middle class.   We need friends in high places, and the last two Democratic Presidents are unreliable allies.