You've read, and/or heard, it one hundred times so far, so 101 times should be no problem:

There are 47 percent of the people who will vote for the president no matter what. All right, there are 47 percent who are with him, who are dependent upon government, who believe that they are victims, who believe the government has a responsibility to care for them, who believe that they are entitled to health care, to food, to housing, to you-name-it. That that's an entitlement. And the government should give it to them. And they will vote for this president no matter what…These are people who pay no income tax.

There are so many things wrong with Romney's statement at the May fund-raiser at the home of a sex-crazed hedge fund manager.    Romney believes the 47% (actually, 46.4%, but why quibble over a million or so people?) who pay no federal income tax pay no income tax whatsoever, disregarding the 43 states which impose a personal income tax.   Romney believes this 47% will necessarily vote for Barack Obama, because, in the manner of Marxist economic determinism, he believes individuals will always vote their economic interests, which bears no relation to reality in the U.S.A. (and if it did, there would be no Republican Party).

Romney thinks these parasites of his imagination believe they are "entitled" to have government "care for them," which, given that he presents no evidence, and there is little evidence, for that opinion, marks him as an elitist par excellence.   And the former governor believes health care, food, and housing are entitlements.   Perhaps individuals are entitled to health care, food, and housing, but, alas, this nation has never accepted that idea.

Many Americans, especially Republicans, have latched onto the idea that nearly half the population is composed of able-bodied adults sitting on their rear ends rather than working at a job.    Presumably, Romney is irritated those 80-year old guys and gals are collecting Social Security when they should be out there working.      According to the pie chart (below) from the Tax Policy Center via Brad Plumer, 10.3% of the adult population (as households) are elderly.  Most of those- 66%- pay no federal income taxes on their Social Security income.   If a person files as an individual, he/she would pay income tax on Social Security benefits if total income exceeds $25,000; if a couple is filing jointly, there would be no tax liability on the benefits if the combined income is not over $32,000.   (Most individuals and couples are below the threshold and therefore pay no tax on these earned benefits.)

Of the remaining 36.1% of loafers, 28.3% are working but make so little they're not subject to federal income tax, but pay payroll tax; 6.9% are not old but claim income under $20,000; and 1% are classified by the Tax Policy Center as "other."     Ironically, a lot of the working poor escape paying federal income taxes because of GOP-sponsored tax cuts, in which in exchange for reductions  in upper-income rates, Republican Presidents have agreed to give a break to individuals and families on the lower end of the scale.    Thus, George W. Bush would boast on February 19, 2004:  "So the tax relief was passed, not only to help individuals, but to help our small business sector. We also increased the child credit to $1,000. We reduced the marriage penalty. I like to remind people that the tax code ought to encourage marriage, not discourage marriage." Seems like we want people to stay married, and the tax code ought to encourage that."   Old Republican tax policy:  lower the rates for the deserving and the undeserving alike.  New Republican tax policy:  lower the rates for the wealthy, increase them for students, the working poor, and elderly people.

The chart below, from Jon Perr (where he got it, I don't know) shows how the wealthy would make out like bandits under Romney's tax plan.   It does not, however, account for the deductions (such as for mortgage interest, state and local taxes, employer-provided health insurance) which benefit mostly the middle class, which he would need to reduce or eliminate to meet his stated goal of deficit reduction.   Nor does it include any policy changes made to accommodate his outrage that   many of the working poor and the lower-middle class are excused from paying income taxes to Washington. 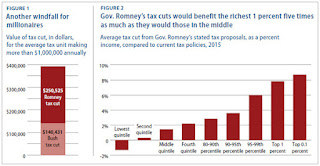 Could it be that Mitt Romney himself, consistent with the old playground taunt, "it takes one to know one," pays no federal income taxes?   Harry Reid believes so, and has said so.   But Mitt probably has paid federal income taxes.    In January, Alexander Burns of Politico reported

Hours before he plans to release his 2010 tax returns, Mitt Romney noted at the GOP debate in Tampa that under his opponent’s tax plan, he wouldn’t have paid any taxes at all.

Romney jumped in to ask: Do you tax capital gains at 15 percent or zero percent?
Gingrich’s answer: Zero.

“Under that plan, I’d have paid no taxes in the last two years,” Romney said, alluding to the fact that all his income is from investments.

So Mitt probably paid federal income taxes- at least in recent years.  However, he has not paid them on work he has done, but merely on capital gains.   And in the one year (2009) for which he has released full returns, he paid at the whopping rate of 13.9%, far less than did most of the people who work and pay income taxes.   Oddly, that is a part of the federal income tax system he did not complain about.