If Bernie Sanders Is A Socialist, I'm A Muslim.

The first nine questions, six from Cooper and/or Lemon and three from locals, were about the water crisis in Flint (excerpt below). The two candidates suggested all manner of measures to fix the problem, including rebuilding infrastructure, hiring residents to deliver water to other residents while the lead pipes are replaced, committing to economic development, having the CDC examine each child, an investigation to assess responsibility. And of course, that the governor should resign

If the suggestions were a little unimaginative, they nevertheless were sound and necessary. After hearing the candidates' plans, which would require a huge financial investment, Anderson Cooper asked how the proposals would be financed. No, of course, he didn't, instead opting for "This crisis in flint as you know, as everybody in the room knows was created by the government. Your policies are about expanding government. Why should people from flint trust that more government is the answer?"

This question, ignorant though it was, presented the respondents with a hanging curve. Nonetheless, Clinton didn't volunteer a response, which was unsurprising, given that she would have ahd to defend government.   However, Sanders the Socialist responded

Listen, I suppose they can trust the corporations who have destroyed Flint by a disastrous trade policy which have allowed them to shut down plants in flint and move to China or Mexico. We could trust them I’m sure

Or maybe — you know, maybe, Anderson, tell you what — we should — maybe we should let Wall Street come in and run the city of Flint...

That was a fairly good reply, given that it coincided neatly with one of Sanders' two major themes, runaway corporate America- his only theme insofar as it is linked to campaign financing. But it could have been better. Sanders might have mentioned that the wheels were set in motion when the first of four emergency managers was hired to run the city government.   His successor ended the city's contract with the Detroit Water and Sewerage Department in order to join another water authority, which had not completed construction. The emergency manager then decided the city would get its water from the Flint River, When it became clear that the water was grossly substandard, the Detroit authority gave to the city an opportunity to switch back to its water, an offer the then-emergency manager (photot from Jessica J. Trevino/DFP) refused. 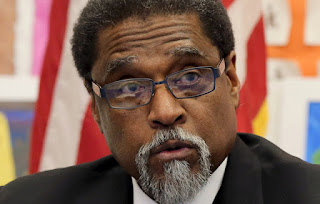 It's more complicated than that, as this timeline from the Detroit Free Press indicates. But there is nothing Sanders does any better than taking a complicated matter, such as corporate control of the economy, and simplifying it so the average voter can understand. But he stood through nine questions- albeit not all of them addressed to him- without once uttering the word "private."

"Privatization" is what Democrats helpfully call it, especially if the issue is Social Security. To many voters- especially independents and Republicans- it's "crony capitalism."  In the Flint water catastrophe, the state's Department of Environmental Quality discouraged the city from taking the necessary steps to undo its mistake and the Emergency Manager, concerned only with short-term costs, acted in complete disregard of the interests of residents and businesses.

It's not surprising that Mrs. Clinton did not correct the impression that government was solely at fault. It is, however, disappointing that Clinton, who has worked hard (and successfully) to maintain impressive support from the black community would not emphasize the tragic consequences of wresting control of city government from its residents to give it to a higher authority.  It is, moreover, disappointing that a self-described "socialist" would not mention any form of the word "private" during this discussion- or at any point during the debate.