A Different Kind Of Christian Candidate

"Long confident but carefree, Politico's Elis Stokols writes, "Trump looked different Wednesday morning as he stood behind a lectern in his Soho hotel; he looked like a candidate serious about trying to win in November."

That might be. The Washington Post reports that at his evangelical summit in New York City on Tuesday

Donald Trump won a standing ovation from hundreds of Christian conservatives (who) see him as more of an ally than they do Clinton, and many are attracted to his nostalgic framework about taking America “back” to a better time. Some are hopeful that Trump, as a political neophyte, is open to their perspective.

Overall, there was a mixed reception for Trump at the meeting with evangelical leaders, though none of the Christians noted the irony of holding the event of followers of Christ at the monument to excess called Trump Tower.  Perhaps the most positive assessment was made by Gary Bauer, evangelical Christian, 2000 presidential candidate, and Cruz 2016 supporter, who argued "Who is it that they're holding up as this paragon, a man or woman without sin that they could have nominated for president?"

Let the record show: neither Bauer nor any evangelical leader ever said that of Bill Clinton- or practically any Democrat. Fundamentalist Christians can consider for endorsement only a Republican politician who is uniquely self-absorbed and whose life has exemplified licentiousness, greed, and self-aggrandizement.

Recall that this is the guy who once spoke of "two Corinthians," "my little wine" and "my little cracker" of communion," admitted he has never asked God for forgiveness, and announced "nothing beats the Bible." At the gathering, Trump addressed his claimed devotion to Christianity, maintaining "I owe so much to it in so many ways," thus becoming the first alleged believer to express gratitude and devotion not to Jesus or God the Father but to the religion itself.

"I am the way, the truth, and the life," committed believers will quote.   The cornerstone of their faith, they will assure you, is not Christianity, but Jesus Christ himself.  They "owe so much," they'll agree, not to religion but to the cornerstone they consider a deity.

Or so they say.  Though extremely politically conservative, as chairperson of the Home School Legal Defense Association and one who helped found the Moral Majority, Michael Farris found even the acceptance of the presumptive GOP presidential nominee at the gathering unacceptable. He recognizes

Today, a candidate whose worldview is greed and whose god is his appetites (Philippians 3) is being tacitly endorsed by this throng.

They are saying we are Republicans no matter what the candidate believes and no matter how vile and unrepentant his character.

They are not a phalanx of God's prophets confronting a wicked leader, this is a parade of elephants.

In 1980 I believed that Christians could dramatically influence politics. Today, we see politics fully influencing a thousand Christian leaders.

Nor were Farris' concerns assuaged upon viewing a photograph of the candidate with Jerry Falwell Jr. (a member of Trump's newly announced "evangelical executive board") and wife Becki Falwell. The background includes a framed picture of Playboy magazine with Donald Trump on the cover. 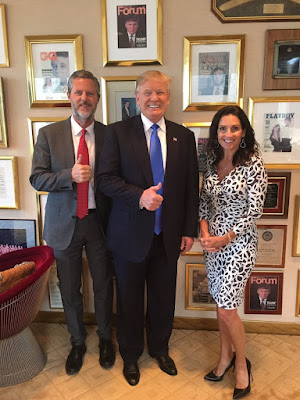