Much ado about nothing.

Kyle Cheney of Politico utilized 26 paragraphs and 144 lines (go ahead and count; I dare you) to suggest that the Republican Party may be, just may be, on the verge of moderating its view on same-sex marriage.   As the saying, modified, goes: that's ten minutes of my life I'll never get back (except as fodder for a blog post).

The hope of some Republicans to alter their platform so as not to include an explicit rejection of same-sex marriage is buoyed by the impending nomination of a candidate who has never specifically advocated a constitutional amendment to define marriage as limited to one man and one woman.( It is also likely- though unstated- that many Republicans cannot imagine an irreligious libertine opposing same-sex marriage, or any relationship that includes sex.)  Still, the primary reason to believe there is any chance in moderating the Party's stance is that

The American Unity Fund has largely spearheaded the organization to remove language in the party’s platform that condemns same-sex marriage. The group, funded by billionaire GOP financiers like Paul Singer, Dan Loeb, Seth Klarman and Cliff Asness, has been pushing for a middle-ground approach – striking the anti-LGBT language in the party’s platform and replacing it with an acknowledgment of the widely varying opinions on the issue.

“I think Donald Trump has his finger on the pulse of the Republican Party. I think he is reflecting the sentiment that people have about LGBT issues, and in reflecting that he’s showing that it’s time to move on,” said Tyler Deaton, a senior advisor to the effort. “He’s said that in many different ways. He says that in a style that only Trump can do it.”

Trump is “no friend of the LGBTQ community,” Jay Brown, a spokesperson for Human Rights Campaign, said Monday. “Donald Trump has vowed to roll back marriage equality, pass Kim Davis-style discrimination and allow governors from coast to coast to pass laws like North Carolina’s HB2,” he said.

Activist, advice columnist, and pundit Dan Savage argues "you can't draw a clean line between the LGBT community and the Muslim community because there are LGBT Muslims in the United States and all over the world."  He recognizes Donald Trump "has pledged to undo marriage equality" and "is the enemy of the LGBT community just as he is the enemy of the Muslim community."  Savage added "Donald Trump attempting to pit the queer community against the Muslim community is not going to fly (because) beating up on what is, in the United States, a vulnerable minority group isn't the way that you impress other members of other vulnerable minority groups to win their support."

Dividing groups against each other, such as blacks against whites, the affluent against the struggling, Christians against non-Christians, is what conservative Republicans do.  Even culturally moderate Republicans now are hard at work trying to protect prvilege based on religious proclamation.   Neither Donald Trump- as Jay Brown noted- nor many Republicans known nationwide have criticized the proliferation of religious discrimination laws, nor has it been open to debate.

Politico's Cheney downplays the probability that the GOP won't repeal its support for an amendment banning same-sex marriage, call for returning the matter to the states, and/or suggest that well-meaning individuals have a difference of opinion on the issue. It is the most the Party even will consider, for it will not endorse the Employment Non-Discrimination Act, which the Democratic Party called for in its last two platforms, and will this summer in Philadelphia.

That legislation would go further than same-sex marriage in guaranteeing equal opportunity for people. So, too, would an end to the constant effort of states to enact greater barriers to reproductive freedom. But there will be no effort to do that in Cleveland, nor will there even be an endorsement of anti-abortion laws within the context of Roe v. Wade.  The Republican Party platform likely will again support adding to the US Constitution a human life amendment which would ban all abortion and even some forms of contraception. 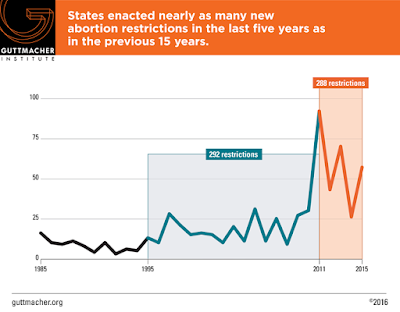 When it comes to restricting liberties, the GOP will not stop at a sexual-preference minority. It will continue to push for a denial of rights to the majority of the population which is female, thereby reinforcing the concentration of power in society's elite.