San Jose Mayor Sam Liccardo, who is a Democrat supporting Hillary Clinton, told the AP that "[a]t some point Donald Trump needs to take responsibility for the irresponsible behavior of his campaign," blaming the Republican's presence for inciting the violence.

Of course, Trump doesn't need to take responsibility for anything, nor does he.  Nor is he responsible for inciting the violence because the individuals themselves ought to be held accountable.

There is only one reason Trump can legitimately be held responsible for the disorder, and it never will be proven. Thirteen months ago

Thousands marched in peaceful May Day rallies in downtown Los Angeles, repeating their annual call for immigration reform but acknowledging that prospects for action in Washington remain grim.

The crowd was a mere shadow of the hundreds of thousands who emerged nine years ago to march joyously down the streets of Los Angeles, demanding a path to citizenship for those who entered the country illegally or overstayed their visas.

And there was no aggressive response from police, who eight years ago wielded batons and fired “less than lethal” rounds at demonstrators and reporters.

Instead, Friday’s event took on the air of a carnival on a hot afternoon, in one part led byJornaleros del Norte — Laborers of the North — on a flatbed truck playing rancheramusic and dozens of people holding up a U.S. flag the size of an intersection. They were trailed by people selling bacon-wrapped hot dogs and carts selling strawberry, coconut and lime treats.

As speakers lamented a judge’s blocking of President Obama’s effort to shield millions from deportation, they cheered former Florida Gov. Jeb Bush’s support for a pathway to legality for immigrants who are in the U.S. illegally.


The fourth paragraph of the L.A. Times article contained the money phrase: dozens of people holding up a U.S. flag the size of an intersection.  Compare that to the rally in San Jose in which "a woman supporting Trump was hit with an egg and other food by protesters, at least one of whom was seen holding up a Mexican flag."

Or compare it to an event last week when

A protester was arrested after a chaotic scene erupted outside a Donald Trump rally in New Mexico overnight, leaving several officers injured after being pelted by rocks....

At one point, protesters broke through a barricade erected by police, rushing the convention center where Trump was speaking. While officers prevented them from getting inside, police say, protesters started to throw rocks and bottles at officers' horses...

Dozens broke through barricades, threw rocks at police and disrupted the event. Many linked themselves to barricades to avoid being removed. 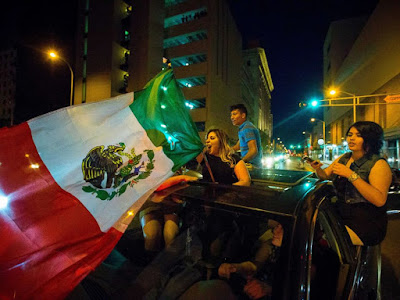 It is, most obviously, the violence which distinguishes pro-immigration reform demonstrations of 2014 and 2015 from anti-Trump rallies of 2016. But if "boys will be boys," partiers will be partiers and Donald Trump is the kind of polarizing figure who attracts revelers and anarchists alike in opposition..

Also visible, however, are flags (photo above from Jett Loe/AP) waved at demonstrations, marches, or riots (video below from 5/1/15, across the country).  The demonstrators in Los Angeles and in other cities in the past few years were well-organized, dedicated to policy. The more recent protests have been of a different sort; disruptive, undisciplined, somewhat violent, disorganized, and presumably not organized.


If these had been hatched by the Trump campaign, they seemingly could not have been carried out in a manner more hlepful to the Republican's campaign.  Use of Mexican flags is particularly counter-productive. Trump spokesperson Katrina Pierson has attacked Gonzalo Curiel, the judge presiding over the Trump University civil suits, for connection to La Raza Lawyers Association, "an organization that has been out there organizing anti-Trump protesters with the Mexican flags." Evidence (and common sense) optional.

Regarder vers le mobile. It's hardly likely that anybody is organizing the protests, though Trump himself surely has a motive. When Indiana-born Curiel issued a ruling against Trump, the candidate responded“What happens is the judge, who happens to be, we believe, Mexican, which is great. I think that’s fine..."

Hard-core Trump supporters are not the only ones who already believe Mexican-Americans aren't Americans. Not only do they believe immigrants from south of the border invariably have little identification with this country but that individuals who are naturalized citizens aren't truly Americans.

They see a Judge born in the Midwest who, initially, their candidate labels "Mexican." (He since has altered his tune, referring to a judge "of Mexican heritage.") And obviously ethnic Mexicans rail against their guy while they wave Mexican flags.  Sprinkling the crowd with American flags would be ideal and in the alternative, leaving flags behind.

I'm not saying Donald Trump is setting up protests or paying protestors. Believe me.  But they certainly are playing into his hands.