Introducing his guest, former New York City mayor and Trump surrogate Rudy Giuliani, CNN's Jake Tapper observed "The New York Times published a story revealing that the paper had seen pages from Donald Trump's 1995 tax returns, which suggested a near-billion-dollar loss, a deduction so huge, it could have allowed Trump to not pay any federal income taxes for as long as 18 years."

Giuliani's defense of his candidate fell along three lines: 1) he has a "fiduciary responsibility" to "run his business at his lowest possible expense;" 2) he would be foolish not to take advantage of "every deduction and legal opportunity;" 3) if he paid more taxes, banks would sue him for "mismanaging" his businesss;" 4) the man is a "genius."

Although there are better terms to describe his fleecing of Americans, Trump may in fact be a genius (sort of). But he certainly is a hypocrite.... and something more significant.

Judd Legum has the lowdown on Trump's tweets (hashtags and recipients omitted below) over the past few years about federal income taxes:

- Barack Obama who wants to raise all our taxes, only pays 20.5% on $790k salary.
- Facebook billionaire gives up his U.S. citizenship inorder to save taxes. I guess 3.8 billion isn't     -   - enough for The Ral Saverin. He's taking off to Singapore but will continue to enjoy the fruits of the U.S.
- Trump is an American that will pay many more taxes in one year than you pay in your entire life.
- Successful people work their asses off to make it, only to be punished by heavy taxes which are then squandered recklessly."
- If amazon ever had to pay fair taxes, its stock would crash and it would crumble like a paper bag. The washington post scam is saving it!
- You know what is the worst part of Barack Obama's Tuesday speech playing class warfare- we paid for it with our tax dollars.


Nonetheless, probably the most revealing, tweeted, on February 23, 2012. was (emphasis his) "HALF of American's don't pay income tax despite crippling govt debt."

Obviously faux populist Trump, who has bragged "I love debt" and "I am the king of debt," cares no more about the accumulation of debt than he does about the outcome of the Romania v. Portugal womens' playoff soccer game in October.    However, it is telling that the GOP meme of lazy Americans not paying taxes lives on in his perspective

These statements by the likes of Romney, Giuliani, and Trump ignore

the reality of federal excise taxes, state income taxes, and variety of other taxes that are often less avoidable than the federal income tax. Indeed, as the Brookings Institution found, "When looking more specifically at middle-aged workers with jobs, 96 percent paid federal income or payroll taxes" (emphasis in original)."

The vast majority of non-income taxpayers fall into three categories:

17 percent includes students, people with disabilities or illnesses, the long-term unemployed, and other people with very low taxable incomes. Also included would be people like our soldiers in foreign wars who are exempted from paying income taxes while they are on active duty in a war zone.

22 percent of people who did not pay federal income taxes in 2009 are people aged 65 or older who have modest incomes (and do not have earnings).

61 percent are working people who pay payroll taxes but are not paying income taxes. 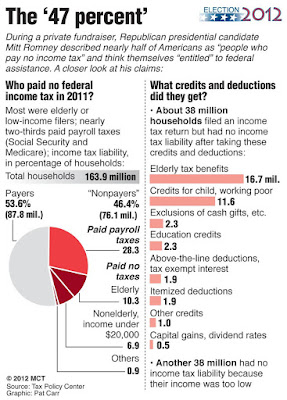 Donald Trump probably has been skirting income taxes for years and should be pummeled for it. The greater problem, though, is that he is the newest incarnation- albeit a particularly crude, uninformed spokesman- of standard GOP elitism.