Mike Crapo is not (insert stupid joke here). He

backed Donald Trump once he became the presumptive Republican nominee in May. But Crapo then revoked his endorsement earlier this month, citing Trump’s offensive comments — caught on tape — boasting of sexually assaulting women.

But now, Crapo is back on the Trump train.

"The choice we have is between Donald Trump and Hillary Clinton. Given that choice, I will vote for the Republican ticket, Trump and [vice presidential nominee Mike] Pence,” Crapo said in a statement on Monday.

On Friday, October 8 David Farenthold of The Washington Post reported that his newspaper had obtained a video in which "Trump bragged in vulgar terms about kissing, groping and trying to have sex with women during a 2005 conversation caught on a hot microphone, saying that 'when you’re a star, they let you do it.'"

Four days later, Rachel Maddow displayed a graph (below) of results of a survey of likely Wisconsin voters conducted by Marquette University Law School over the four-day period that began Thursday, October 6 and ended Sunday, October 9.   On Thursday, Hillary Clinton had held a one-point advantage over Donald Trump among likely Wisconsin voters. That increased to six points in polling conducted Friday and soared to 19 points among the Wisconsinites polled Saturday and Sunday. 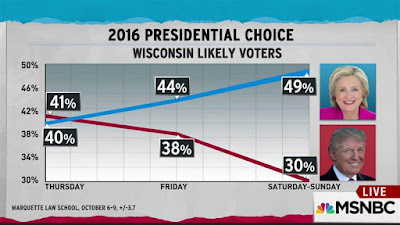 Maddow cautioned it might not be "reasonable to expect the extreme polling effect that we saw from the 'Access Hollywood' tape." Good thing that, because it appears- albeit with evidence less than conclusive- that any effect has worn off.

No recent Marquette University poll has been released. However, it appears the surge of support for Clinton was more a bounce than a bump as Clinton's lead over Trump in Wisconsin has dropped dramatically since October 9.  Additionally, this eastern Pennsylvania site argues

And when Real Clear Politics averaged the most recent polls together, it actually showed Trump polling slightly closer to Clinton than before the “Access Hollywood” tape was published by theWashington Post.

Trump is polling slightly closer to Clinton than before the "Access Hollywood" tape was published by The Washington Post.  Gnaw on that a moment.

The impact is very difficult to discern because it requires results by the same outfit from the day before the tape, the day after the tape, and days and/or weeks beyond. But it at least appears that the offending video/audio has had little net effect. We ought to determine definitively whether that is the case, and whether there has been a different impact among men than among women. Perhaps Trump suffered among women by the controversy but benefitted among men. Alternatively, the differences, positive and negative, post- and pre- may be slight for each sex.

Admittedly, it might be simply that the cake was already baked, that virtually everyone in a country in which 40% of the electorate want him to lead the Free World already knew he routinely sexually harassed women in an illegal, crude and gross manner.  Obviously, under this scenario, little difference in the race would be expected.

And I am the King of Siam.

More likely, people (men and/or women) were initially revolted by the revelations; then, were not.This has nothing to do with the loss of jobs in the heartland, rising health care premiums, hard working Americans being left behind by crony capitalism,or working class angst. Whatever it does say about the country, it's not good.