In an interview with the Financial Times published Sunday, President Trump stated "You know, if you issue hundreds of tweets and every once in a while you have a clinker, that's not so bad."

Ironically, that itself is a clinker, or rather a clunker, which presumably is what Trump meant. But lest we think he was unusually self-effacing by admitting that his batting average falls somewhere below .997, the President went back to his well-known well yet again, contending  "My last tweet, you know the one that you are talking about perhaps, was the one about being in quotes, wiretapped, meaning surveilled. Guess what, it is turning out to be true."

In fairness, that was not the tweet in which he suggested that Barack Obama himself had set up the bugs (cartoon below from Monte Wolverton/L.A. Daily News).  Rather, Trump was referring to the tweet, one among a series, alleging "Terrible! Just found out that Obama had my ‘wires tapped’ in Trump Tower just before the victory. Nothing found. This is McCarthyism." 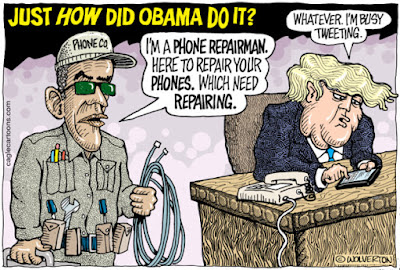 Two weeks after the barrage, Trump would claim "Wiretapping is pretty old-fashioned stuff,". "But that really covers surveillance and many other things."

Is “wiretap” a colloquial term? Not by my lights, but it might seem that way to Trump; the fact that he writes it as two words, spelling the second one “tapp,” suggests that he hasn’t encountered it in writing all that often. As Lucy Ferris has written of Trump’s chronic misspellings, “If you see a word correctly spelled millions of times, then regardless of the peculiarities of English orthography, you’re apt to know when it looks ‘wrong.’”


Whatever evidence Senate Intelligence Committee chairpersonNunes apparently received from the Administration and then surreptiously traveled to the White House to give to the President has not been revealed to the general public. But it should not be forgottent that Trump claimed or strongly implied a) there was wiretapping; b) he was the target; c) Obama ordered the acting; d) nothing was found; and e) it is McCarthyism.

As of now,  we cannot determine the validity of (a), (b), (c), or (d) and know that (e) is false.   Even if the first four parts are valid, that would leave the President of the United States and leader of the free world with an average of 80%. That's a little more than one among the hundreds Donald J. Trump claimed.