No To Fearless Girl

Nine days ago, Senator Elizabeth Warren tweeted a photo of herself

showing her posing with the “Fearless Girl” statue in New York.

"Fight like a girl," Warren wrote alongside the image.

“I hope she stands there until the bull falls over,” Warren told USA Today in an interview published Monday. 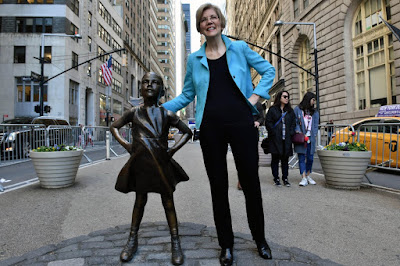 Please, no, Ms. Warren.  Salon's Amanda Marcotte (writing before Warren's tweet) understands the need to "fight income inequality while also taking a sledgehammer to the hostility toward female ambition that helped lead to the defeat of Hillary Clinton" Yet she recognizes "girl power is not a suitable stand-in for feminism."  Her primary objection to "Fearless Girl"

is that it doesn’t even succeed at meeting its admittedly limited artistic goal of advocating for female ambition. The piece is infantilizing and places the blame for women’s inequality on women themselves, not on the structural forces of sexism.

Being human, I’m not immune to the appeal this statue has for tourists, especially when it comes to the crowds of little girls crowding around the statue, having their pictures taken. But even the fact that this statue is so popular should be the first clue about how toothless it is. Girl power is widely popular, not just on the left but increasingly on the right. Almost everyone loves the idea of little girls being proud and strong and getting good grades and being good at sports.

But the second those A-student girls grow up into women who want good jobs and egalitarian marriages and maybe even a shot at the presidency, suddenly people stop being so enthusiastic.

“[E]veryone knows that men tend to be OK with ‘girl power’ so long as it’s their daughter benefiting but seem increasingly less comfortable with it when women in general benefit,” wrote the blogger vacuumslayer.

Think same-sex marriage, which has not been an excessively bitter pill for Republicans to swallow, probably because they know someone gay.  After the son of Senator Rob Portman came out to his father in 2011, the Ohio Republican reassessed his opposition to gay marriage, which he eventually endorsed. The far-right Dick Cheney is a supporter of same-sex marriage, though he has been less frank about his reasoning, only rarely acknowledging that daughter Mary (who has been a GOP activist) is a lesbian. In both cases, a member of the politician's immediate family might directly benefit from legalization.

Feminists would be hard-pressed to find a better symbol of the movement’s widening class divides than Fearless Girl. Commissioned by State Street Global Advisors, a wing of a massive financial services company, Visbal’s work is meant to draw attention to the lack of women on corporate boards. As Jia Tolentino ably lays out in the New Yorker, contemporary feminism’s fixation on the incremental admission of a small number of women into traditional halls of power ignores both the vast majority of women and the ways other forms of oppression disproportionately harm women. Fearless Girl’s school of feminism, to the extent that she represents one, is shallow and apolitical. It doesn’t help that the State Street Corporation counts just three women on its board of 11, or that the company’s advertising firm chose to represent women’s career empowerment with an image of a child.

Marcotte's emphasis is slightly different, for she argues "the image of solitary defiance in Fearless Girl is fun to look at but completely misrepresents what is required to defeat the millenia's worth of male oppression."  However, she notes "the reason for women’s lack of equality is that there’s an ingrained and well-organized system to clip the wings of women and keep them in their place. The only way to fight back is through organizing and collective resistance."

That would no doubt find approval with Cauterucci and with Elizabeth Warren, who understands class division btter than almost anybody.  Senator Warren should have been one of the first to point out that such a statue in the heart of Manhattan belies her struggle for corporate accountability and the rights which consumers, male and female alike, must assert in the face of raw corporate power.