Lag At Your (Our) Own Risk


The US Department of Justice "fact sheet" on the Violent Crime and Law Enforcement Act of 1994 asserts it "reflects the bipartisan product of six years of hard work." And in a helpful guide to the law, this BBC article describes it as "a lengthy crime control bill that was put together over the course of six years."

The bipartisan nature of the legislation is reflected in the support of former New Hampshire governor and Bush 43 adviser John Sununu for the act while the "six years" is a critical factor in assessing the Republican's remarks in a recent interview. Salon's Matthew Rozsa questions the impact upon President Bush's legacy of the "millions of African-Americans and Hispanics (who) have suffered becasue of the draconian policies involved with the war on drugs."  Sununu, father of the former New Hampshire senator with the same name, responds

I think if you go back and look at what the president put forward as his crime bill, it was a little bit different than what Bill Clinton expanded it to be. But I actually give them both credit for passing legislation that was critical at the time in the country. That legislation probably has to be rehoned and I would not oppose a smart reform of that legislation, but at the time the country really was going through an inner-city crisis with a lack of resources in local police departments, county departments, municipal departments.

Though various items, including a boost in resources to state and local law enforcement, were included in the legislation. Still, Sununu's argument bears critical assessment. He agrees, realistically, that the "legislation probably has to be rehoned and I would not oppose a smart reform of" it.  He maintains "at the time the country really was going through an inner-city crisis with a lack of resources...."

Major cities at the time were in fact hamstrung by a lack of resources not only because of a decline in their revenue base but also because of a sharp rise in crime the previous 2-3 decades.  Further, as the graph below indicates, fear was widespread because the nation's residents believed the USA was undergoing an explosion of what was commonly dubbed "crime in the streets."

The term "crisis" is here artfully applied to explain why the legislation "was critical at the time in the country." The first graph below suggests that the rate of violent crime, property crime, and crime overall peaked in 1991, the mid-point year of the process of enacting the 1994 act.  The second graph, evaluating only the number of violent crimes per 1,000 people 12 years or older, indicates that the violent crime rate peaked at 51.2 in 1994- the year of passage of the bill. 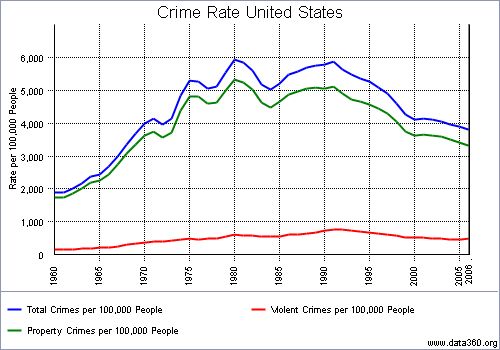 The three graphs taken as a whole demonstrate that the catalyst for the legislative process, begun in or near 1988, was the legitimate- and even justified- fear of street crime.  Following passage of the act, the rate continued its downward trajectory begun during the period of congressional consideration.  (If the last graph is to be relied upon, violent crime began to drop around the point of passage, a change so abrupt it is very likely coincidental.)

It continued to drop, and dramatically through at least 2014. (More recent statistics are not as favorable.)

However, the impact of mass incarceration and aggressive policing upon the incidence of crime is controversial. In April, 2014 Bill O'Reilly seemed to attribute it to imposition of "tough mandatory drug sentencing" and two years later to "tough sentencing for violent offenders (which) drove crime down in the USA, big time."  Reviewing a wide range of evidence for sixteen likely reasons, Vox in 2015 estimated that increased incarceration had accounted for a "fraction of the drop" and increased police presence for "up to 10%."

The "get tough" approach (testosterone rising), whatever its externalities, contributed to the safety of Americans, though it is unlikely it was the major reason.  However, the timing of the 1994 Act, which played a major role in criminal justice policy throughout America, was more than suspect. It was born from justified concern and legitimate panic of the American people,but was poorly timed.

There is a problem of lag time in law enforcement policy. The positive changes in reduction brought about by the Bush 41-Clinton legislation were minimal but would have been maximized had the legislative process begun years earlier.

That's why a response to mass incarceration must view crime not as it is at the moment but as it is likely to be down the road. It requies prescience and consideration of the trends which have contributed to its reduction over the last quarter-century.  It's not as sexy as railing against "mass incarceration" and racial disparities, nor wearing an "NYPD" hat and blasting reformers as anti-police, but such factors cannot be overlooked.