Soon after President Trump's ill-advised decision to withdraw from the Paris Climate Accord, the request from Daily Kos came in to "take action today and tell Congress: It's time to put America first and take the climate crisis seriously before it's too late." Two days later, I was implored by DK to "Sign the petition to your state & city government. Fight climate change by agreeing to join the Paris climate agreement."

Then we were informed that as supporters of  the agreement, the governors of California, New York, and Washington had rapidly formed the United States Climate Alliance, which is to be "a forum to sustain and strengthen existing climate programs, promote the sharing of information and best practices, and implement new programs to reduce carbon emissions from all sectors of the economy.”

This is a good thing, not unlike if the GOP congress were to propose raising the minimum wage to $7.50 per hour, no strings attached (fat chance, that).  Hopefully, it will prove to be only a start, even if it indirectly helps pull Donald Trump's fat out of the fire (on this one issue) and smacks a little of states' rights.


Though doing more good than harm, it's not the primary problem with Trump's move.  Michael Grunwald explains

Similarly, it’s important not to exaggerate the substantive impact of Trump’s decision to bail on Paris, which will officially remove the United States from the agreement in late 2020 at the earliest. It’s a signal that the U.S. government no longer cares about the climate, but that’s been abundantly clear ever since Trump won the election and appointed an energetic fossil-fuel advocate named Scott Pruitt to run the Environmental Protection Agency. Leaving Paris won’t reverse the rapid decline of coal or the boom of cleaner energy in America, because the economics of coal have fallen apart while the cost of wind and solar have plummeted, and it won’t stop that same trend in China, India and the rest of the world. By the same token, if Trump had announced he was staying in the Paris deal, that wouldn’t have meant that Trump was abandoning his efforts to gut Obama’s climate regulations (like the Clean Power Plan for the electricity sector) and other climate policies (like those fuel efficiency standards for cars and trucks). Really, it would have been pretty weird for Trump to remain in the deal while trying to undermine everything the U.S. was doing to live up to its commitments.

Meanwhile, the earth is still warming, the polar ice caps are still melting, and the seas are still rising, heedless of the inspiring words committed to paper in Paris, and just as heedless of a noisy American politician’s decision to reject them. Trump may believe climate change is a hoax manufactured in China, and congressional Republicans may continue to oppose any action to address it, but that won’t make the physical realities of climate-driven droughts, floods, pandemics and refugee migrations any less brutal. It’s reminiscent of the old riddle: If you call a tail a leg, how many legs does a horse have? Four, because a tail is not a leg. Trump can call global warming a hoax, but 2014 was nevertheless the hottest year on record, until it was displaced by 2015, which was overtaken by 2016. That tail is not a leg.

The major issue is one of leadership. Trump wants to lead his base, or maybe the United States, but not beyond.  A trio of  Washington Post reporters notes that while there will be relatively miminimal concrete impact of Trump's rejection of the climate pact

it matters more that he’s announcing to the nations of the world that he intends to ignore an issue they consider vital to the planet. He is creating an intentional leadership vacuum, dispensing with the long-standing notion of the United States as the indispensable nation—just as he did when he withdrew from the Trans-Pacific Partnership trade deal in Asia, with his tepid commitments to NATO on his trip to Europe, and with his proposal for drastic budget cuts in foreign aid and international diplomacy. He is making it clear that America First means the problems of the world are not America’s problems. He’s opening the door for China and Europe to take over the role of global leaders on climate change, and maybe the world’s other major problems.

If he needed a nudge, though, one came from France over the weekend. Macron was quoted in a French journal talking about his white-knuckled handshake with Trump at their first meeting in Brussels, where the newly elected French president gripped Trump’s hand tightly and would not let go for six long seconds in a show of alpha-male fortitude.

“My handshake was not innocent,” Macron said. He likened Trump to a pair of authoritarian strongmen — Russian President Vladimir Putin and Turkish President Recep Tayyip Erdogan — and said that he was purposefully forceful because he believed his encounter with Trump was “a moment of truth.”

A few days later, Trump got his revenge. He proclaimed from the Rose Garden, “I was elected to represent the citizens of Pittsburgh, not Paris.”

Embracing strongmen, talking the talk of Vladimir Putin, running down a mayor of the nation's biggest ally, giving the back of the hand to NATO in Brussels, and now boldly and unabashedly undermining U.S. military policy in the Mideast, President Trump has given whole new meaning to the word "weak."

In April, 1970 President Nixon (defending a policy which would end badly) declared that failing to take aggressive action against Cambodia would demonstrate "If, when the chips are down, the world's most powerful nation, the United States of America, acts like a pitiful, helpless giant, the forces of totalitarianism and anarchy will threaten free nations and free institutions throughout the world."

Under the current President, the USA has become a pitiful giant while assisting the forces of totalitarianism, be they Russia, Saudi Arabia, or the Phillipines.   Donald Trump, Eugene Robinson observes, "is abdicating all moral power. The world has no choice but to move on." 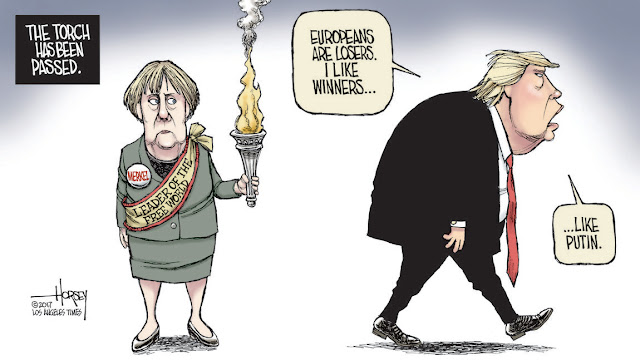