President Trump recently had Ted Nugent over to the White House, although (more likely, because) the one-hit wonder had before the 2012 presidential campaign had warned “We need to ride into that battlefield and chop their [the Obama administration’s] heads off in November.” Two years later he referred to the first black president as a "chimpanzee" and denounced "a Chicago communist raised communist educated communist nurtured subhuman mongrel like the ACORN community organizer gangster Barack Hussein Obama..."


Still, that was one guy, one time who was given the privilege of a visit very few Americans ever are offered.

Then Steve M. pointed out the statement of Ann Coulter, who once had maintained “My only regret with Timothy McVeigh is he did not go to the New York Times Building;” then clarified "Of course I regret it. I should have added, 'after everyone had left the building except the editors and reporters;'" then given a chance at retraction, added "I think the Timothy McVeigh line was merely prescient after The New York Times has leapt beyond — beyond nonsense straight into treason, last week.”

That same year, SM noted, Coulter wrote her second-right wing screed to hit #1 on The New York Times best-seller list for non-fiction, an honor second to being invited to the White House, but even more career-enhancing.

Still, old news of a sort, not worth blogging about now that Kathy Griffin, the latest celebrity to do something reprehensible, took down an image of Trump with a bloody, severed head.  Fulsomely apologizing on Instagram, she wrote "I went way too far. The image is too disturbing. I understand how it offends people. It wasn't funny. I get it.....I made a mistake and I was wrong."

CNN canceled its arrangement with Griffin to co-host New Years' Eve festivities with Anderson Cooper, as did Route 66 Casino in New Mexico the July appearance of the comedienne. CNN and Route 66 have business considerations, although the idea of someone failing to live up to the ethical standards upheld by a casino is absurd.

But no more absurd than the response from a couple of Democrats.  Minnesota Senator Al Franken, who already had panned Griffin's stunt as "inappropriate and not something that should be anywhere in our national discourse," canceled a July appearance he was to have held with her to promote his new book.  And freshman senator Catherine Cortez Masto of Nevada announced she would give to charity a donation made to her by Ms. Griffin.

Ted Nugent gets invited to 16oo Pennsylvania Avenue, a fitting tribute from a man who recognized (and still does) that the American people are fed up with what they term "political correctness." Ignore Breitbart, Newsmax, and the other right-wing media outlets which want to bait Democrats into displaying what they and their followers consider weakness.  Republicans will not be satisfied with apologies or satiated by sincere remorse, and a demonstration of sensitivity by Democrats will remind many people of what they don't like about the Democratic Party.

"When people are insecure," Bill Clinton once said, "they’d rather have somebody who is strong and wrong than someone who’s weak and right.”    Donald Trump knows that well. The opposition, burdened by conscience, does not. 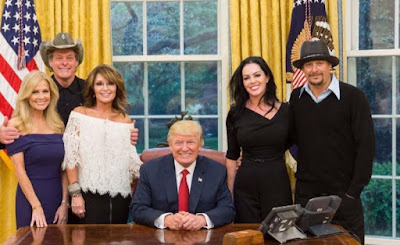