Don't Let The Door Hit You On The Way Out.


In "The Tragedy of Paul Ryan," published on April 11 in Politico Magazine, Tim Alberta notes "Paul Ryan came to Congress as a Jack Kemp conservative and will depart as a Donald Trump Republican."

Once Donald Trump won the presidency, Alberta maintains, Ryan wanted to return as Speaker so he could

have a chance to pursue the legislation of his dreams: repealing Obamacare, rewriting the tax code, reforming entitlement programs and rebuilding the military. But it would be possible only if he partnered with the very man whose offenses were so manifest that Ryan disinvited him from his own Wisconsin congressional district a month before the election.

The Affordable Care Act, although weakened, will not be repealed during this Congress. (Alternatively, though it will not be repealed, Obamacare is a shell of its former self.) Congress has passed a bill which President Trump pushed for "rebuilding" the military, because spending more on the military than the next seven or eight nations combined was, Ryan seems to have believed, dangerously insufficient.

The corporate tax scam passed by the GOP Congress in the last few days of 2017, whose specifics baffled accountants and the public alike, likely will result in significant cuts to Medicare, will explode the debt beyond Ronald Reagan's wildest wet dream, and will shove money upward at a furious rate. Further, as an economist who worked under President Obama noted, "it leaves low- and middle-income workers with even fewer resources to invest in their children, and increases the number of Americans without health insurance.” 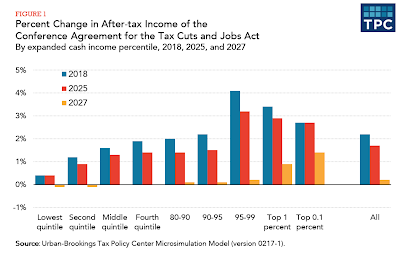 Paul Ryan has done his job- as he planned it- very well, and almost all Americans insufficiently financially advantaged to be a major donor to Paul Ryan will be the worst off for it.

The day before Alberta's article was published, Mieke Eoyang argued that Ryan, now that he is free from any concern about backlash from the ultra-right among his colleagues and in the GOP base, has a chance to redeem himself. She explains

Under House rules, the speaker may, at any time, remove any member of a select committee at his or her discretion. In the past, members have been stripped of their committee assignments for causing problems for the leadership. Thus, unlike other committees, where the caucus or a steering committee has a say in the committee leadership, HPSCI is effectively under Ryan’s thumb. So he owns Nunes’ shameful handling of the Russia probe, and his hijinks on behalf of the White House.

One year ago, chairperson of the House Select Committee on Intelligence Devin

Nunes dashed off to the White House in the middle the night and the next day, called two bizarre news conferences during which he accused President Barack Obama’s team of improperly “unmasking” the identities of Trump associates.

Having debased himself in this shameless display of obeisance to Donald Trump, Nunes announced that he was recusing himself from the committee's oversight of the Russia investigation. However, he did no such thing, and in January demanded the Justice Department give, Eeyong reminds us, "highly sensitive documents related to ongoing criminal investigations to congressional investigators."

Ryan backed Nunes, as he did when the committee the following month recklessly- against the objection of the FBI and the DOJ- released (on a party-line vote) its partisan memorandum accusing the FBI of misconduct in its handling of the application for a warrant for Carter Page.

he threatened to hold in contempt and begin impeachment proceedings (against) Rosenstein and Wray if they did not provide other documents that are part of the government’s case against people charged in the Mueller investigation. This isn’t oversight—it’s a bald-faced attack on America’s law enforcement institutions that runs contrary to the GOP’s long-standing respect for the rule of law.

If it wasn't yet obvious what Nunes was up to, later that day he told Laura Ingraham "We're not going to just hold in contempt, we will have a plan to hold in contempt and to impeach." He was not referring to Donald Trump.

Eoyang wants Speaker Ryan to replace Nunes with Representative Conaway (next-senior Republican on the committee) or someone else credible, encourage the committee head to appoint respected career professionals as staff, and significantly tone down the rhetoric.

But of course he won't do that. He won't do that because Paul Ryan has been as interested in containing President Trump as he has had in the issue of poverty, a short-lived, boutique cause for him. He remains, as Charlie Pierce has periodically called him, "the biggest fake in American politics."