You have heard about the row (video, below) between Bill Maher and Sam Harris engaged in with Ben Affleck and to a lesser extent, Nicholas Kristof, on Friday's "Real Time." You may even have seen it. ABC News explained

Affleck was on the Friday show as part of a panel that included author Sam Harris and New York Times columnist Nicholas Kristof. The discussion on whether liberals were backing away from liberal principles and failing to criticize Islam for what many people view as its inequality toward women, minorities, including gays and lesbians, and other religions, quickly turned into a heated debate after Harris said liberals had failed to criticize what he viewed as the failings of such freedoms in the Muslim world.

People had been sold “this meme of Islamophobia where every criticism of the doctrine of Islam gets confused with bigotry toward Muslims as people,” Harris said.

“These are liberal principals that liberals applaud for but then when you say in the Muslim world, this is what's lacking, then they get upset,” Maher said.

Harris added: “I would argue that liberals have failed us.”

That’s when Affleck chimed in, addressing Harris, the author of “Waking Up: A Guide to Spirituality Without Religion.” “Thank God you're here,” Affleck said. “Are you the person that understands the officially codified doctrine of Islam?” When Harris said he was “actually well-educated” on the topic, Affleck pressed: “I’m asking you, so you’re saying Islamophobia isn’t a real thing?”

When Maher asked Affleck why he was being so hostile toward the idea, Affleck said “because it’s gross, it’s racist, it’s disgusting.”

Harris spoke to the actor, saying “Ben, we have to be able to criticize bad ideas” – and Affleck agreed – the Harris added: “But Islam at this moment is the motherlode of bad ideas.”

Affleck also said more than a billion Muslims weren’t fanatical, didn’t punish women, “just want to go to school, have some sandwiches, pray five times a day and don’t do any of the things that ‘all Muslims do’ – you’re stereotyping!”


Criticism was swift from progressives, including from otherwise feminist blogger Taylor Marsh, who wrote

What Bill Maher did on Friday, however, was also reveal the disgusting intolerance of his atheism. An arrogance some atheists have through their surety that nothing lies beyond the physical world. Where organized religion is concerned, the rules and regulations that keep out women and LGBT from their power positions in most churches and the great religions is worthy of scathing criticism. Maher’s film Religulous is one of the best examples of this scrutiny.

To blame hundreds of millions of Muslims for the violence of jihadists?

Bill Maher’s outlandish supposition is good for ratings, it brings in some on the right, too, broadening his audience and a discussion to ostracize certain people of faith, a subject that is a favorite of his.

Let’s hope it brings moderate Muslims out to take him on.

As a deeply spiritual person, I don’t accept any fundamentalist rules that keep women from standing next to male leaders of the great churches.

Being lectured by an arrogant atheist on the violence of a religion he doesn’t care to understand, however, especially when bigotry and racism are clearly visible, is quite different from due criticism liberals should offer on human rights offenses.

Bill Maher should check his “liberalism.” It’s missing a through line.

One wonders what qualifies Marsh- or anyone- as "deeply spiritual," unless it refers to worshiping the spirit world. But it is a little odd to read someone who has "written about Saudi Arabia's oppression of women (and) the Taliban's war crimes against women and girls" defend radical Islam, which in Saudi Arabia, for instance, takes the form of prohibiting all girls and women from traveling, studying, or working without permission from their male guardians.. And that's in what is sometimes referred to as a "moderate" Islamic state and which is arguably a U.S. ally.

"No one is any more critical than I am of organized religion," writes Marsh (short, apparently, for Marshall), and therein lies the problem.  It is a gross generalization to criticize, as Marsh proudly says she does, "organized religion."  There is a difference among religions- and Islam is a far cry from Christianity and Judaism, as is recognized across the world, except in some progressive precincts here.

Not only are the religions different, so too are its adherents.   In 2013, the Pew Research Center released findings (map and a selection of its charts, below) from interviews with 38,000 Muslims in a total of 37 countries (Saudi Arabia and Iran excluded due to "political sensitivities or security concerns.")  It found disturbingly traditional, illiberal views were more common among Muslims in the Middle East and in Africa than in Asia or Europe.

The response among Muslims in Egypt was not uncommon for the region in which it lies. In that nation, 74% believe Sharia should be the law of the land.  Among those, 81% would support stoning as punishment for adulterers.  Further, 86% believe in the death penalty for leaving Islam and 85% believe a wife must always obey her husband.

It shouldn't be- but is- necessary to point out that in no part of the USA would one find numbers anywhere comparable among Pentecostals, Southern Baptists, Roman Catholics, or whatever your own choice for favorite doctrinaire religious denomination.   Opposition to reproductive freedom and same-sex marriage is not equivalent to favoring execution of adulterers and apostates.

Marsh coyly brags "I don’t accept any fundamentalist rules that keep women from standing next to male leaders of the great churches" because she knows some Christian fundamentalists balk at this basic principle. But execution for not following the faith is a different matter, a distinction to which the critics of Maher/Harris turn a blind eye..

In an interview with Salon the day after the controversial segment, Maher comments "I mean, do the people arguing with us, would they really open a lesbian art gallery in Ramallah? [Laughs] Or Karachi? Or Cairo? I don’t know if they would back up what they’re saying with actions."  They wouldn't, because liberal values, or values of whatever sort, take for them a backseat.

The U.S.A. is a nation of laws, not of men (or women).Similarly, the critics are less interested in defending western values of tolerance, freedom of speech, equality, and the like than they are in defending particular groups. But while we must not condemn people because they are different than us, neither must we condone their outrages simply because they are different than us. Liberal guilt should have its limits,

Were this only true  for David Harris-Gershon. In Tikkun (a periodical discomfited by Zionism), Harris-Gershon accused Maher/Harris of "what white men in America have been doing for the last twenty-five years: they shielded their racism and anti-Muslim bigotry under the umbrella of liberal values."

Uh, no, they haven't. Conservatives never utter "liberal values" as anything but an epithet. And if Gershon is referring to someone such as Hillary Clinton, who has spoken out repeatedly against the atrocious treatment of women in much of the third world, he should re-evaluate his concept of "white men."

Gershon's reference to "white men" suggests that he believes women and non-whites are immune to bigotry, which if true would be quite an anthropological anomaly.  He then went on to claim "It’s this type of disregard for both the rights and the humanity of Palestinians, as a 'human rights activist,' which established a tradition of liberal washing Maher gleefully continued on Friday evening."

Among those residents of the Palestinian territories, Pew found, 89% want Sharia law, with 84% of them supporting stoning as a punishment for adultery. Thankfully, only 66% believe Muslims who leave the faith should be executed.   Maher did not even mention Palestinians on Friday night.  Nor does he claim to be a human rights activist. Otherwise, Gershon's statement is entirely accurate.

Marsh decries being "lectured by an angry atheist," though the comments of Maher and Harris were no more similar to a lecture than winter in Milwaukee is to summer in Miami. Perhaps she, Gershon, and some other progressives feel betrayed by atheists Maher and Harris, whom they are disappointed do not cling to a false moral equivalence.

Bill Maher does not argue, nor believe, that Muslims are to be annihilated or even persecuted (as they are as citizens in most Islamic nations) because of their religion.  But neither ought we to deny facts, however uncomfortable they are.   Committed atheists evidently are to believe that Judaism and Christianity (and their adherents) in the early 21st century are morally equivalent to Islam and Muslims. The facts, however inconvenient, indicate otherwise. 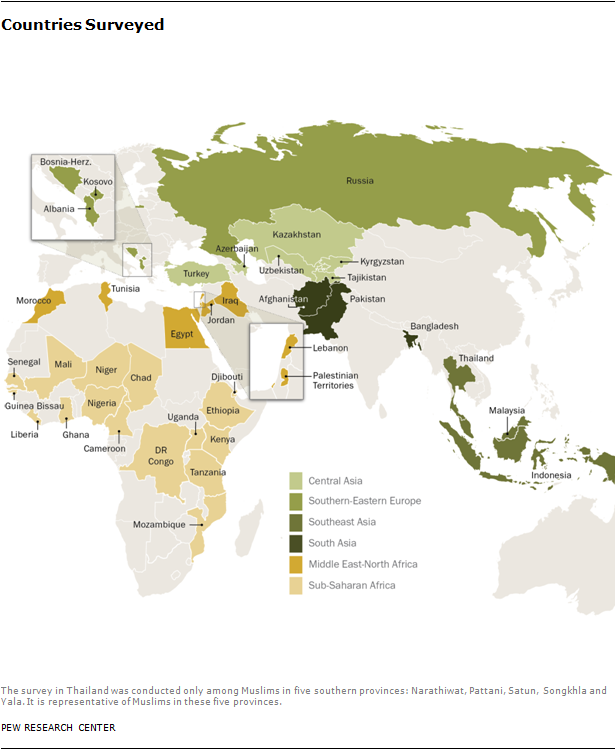 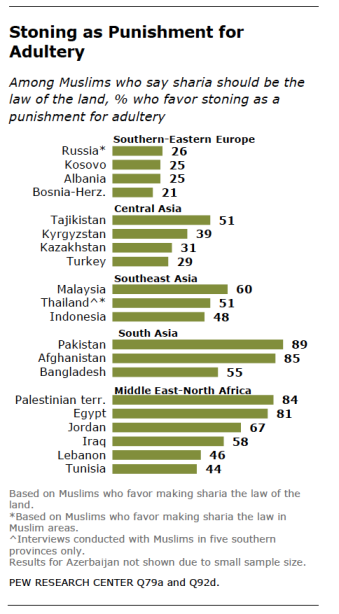 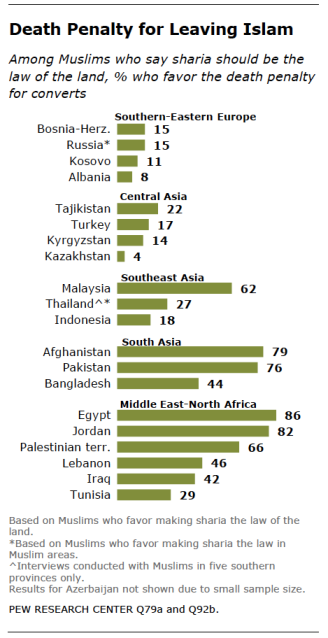 Excellent article. Took ya a while to make your point in the article, though.