The Comedian Is Right (Or Left) Again

James Foley, James Risen, Dianne Feinstein, race, and golf would seem to have no connection to each other. But they have.
Bill Maher nearly nailed it on Friday night.  He was interviewing embattled New York Times reporter James Risen (video apparently not available for embedding), who explained that in the panic after 9/11/01, President Bush and Vice-President Chaney acted in a "hurried and ad hoc" fashion.  But citing "the crackdown on whistleblowers and leaks," he lamented, "Obama "has made all these things permanent." That, he continued, is "really difficult to understand because as you say, he's a constitutional law professor and it doesn't seem to be a part of his background."
Understanding something beyond (or instead of) ideology or principle is at play, Maher responded "it might also have to do something with, with the fact that as the first black president, he doesn't want there to be a terrorist attack on his watch. He knows they would blame him. There wouldn't be a black president for another hundred years."
Consistent with Risen's analysis, Dan Froomkin wrote


Continued White House foot-dragging on the declassification of a much anticipated Senate torture report is raising concerns that the administration is holding out until Republicans take over the chamber and kill the report themselves. Senator Dianne Feinstein’s intelligence committee sent a 480-page executive summary of its extensive report on the CIA’s abuse of detainees to the White House for declassification more than six months ago.
In August, the White House, working closely with the CIA, sent back redactions that Feinstein and other Senate Democrats said rendered the summary unintelligible and unsupported.
Since then, the wrangling has continued behind closed doors, with projected release dates repeatedly falling by the wayside.  The Huffington Post reported this week that White House Chief of Staff Denis McDonough, a close ally of CIA Director John Brennan, is personally leading the negotiations, suggesting keen interest in their progress — or lack thereof — on the part of  Brennan and President Obama.
Human-rights lawyer Scott Horton, who interviewed a wide range of intelligence and administration officials for his upcoming book,  “Lords of Secrecy: The National Security Elite and America’s Stealth Foreign Policy,” told The Intercept that the White House and the CIA are hoping a Republican Senate will, in their words, “put an end to this nonsense.”
Stalling for time until after the midterm elections and the start of a Republican-majority session is the “battle plan,” Horton said. “I can tell you that Brennan has told people in the CIA that that’s his prescription for doing it.”
Republicans are widely expected to win control of the Senate Nov. 4.
Victoria Bassetti, a former Senate Judiciary Committee staffer, wrote this week that the administration is playing “stall ball” and that Senate staffers expect Republicans would “spike release of the report” should they take over the chamber.
Asked if the White House is slow-walking the negotiations on purpose, National Security Council spokesperson Bernadette Meehan replied:
The President has been clear that he wants this process completed as expeditiously as possible and he’s also been clear that it must be done consistent with our national security. The redactions to date were the result of an extensive and unprecedented interagency process, headed up by the Office of the Director of National Intelligence, to protect sensitive classified information. We are continuing a constructive dialogue with the Committee.
She notably did not rule out the possibility that negotiations will extend beyond the 113th Congress.
The report, which Senate Democratic staffers worked on for five years, is over 6,000 pages long and is said to disclose new details about both the CIA’s brutal and systemic abuse of detainees and the pattern of deceit CIA officials used to hide what they had done.
The CIA’s hostility toward the Senate investigation burst into public view in March, when Feinstein disclosed that the CIA had improperly searched computers being used by her staffers — and then had leveled false charges against those staffers in an attempt to intimidate them. Brennan at firstangrily denied those charges, then apologized, then angrily qualified his apology for the CIA’s actions.
Critics of the Bush administration’s torture regime are hoping the report’s release will lead to a long-sought moment of accountability. That, of course, is exactly what Republicans and people who were part of the regime — many of who are still in top positions in the intelligence community, and close to Obama — don’t want.
But the committee’s investigation was narrowly limited to the CIA’s involvement in torture programs. That will leave the people who gave the CIA its orders — starting with Dick Cheney and George Bush — essentially off the hook.
The findings also don’t address the considerably more widespread and common use of torture by the military at Abu Ghraib, Guantanamo Bay and elsewhere. A bipartisan Senate Armed Services Committee report in December 2008 definitively blamed senior Bush administration officials for sanctioning those practices. But coming at a time when the nation was anticipating a period of intense change as Obama succeeded Bush, the reaction was muted.
There we have the connection among Risen, Feinstein, and race, but nothing on journalist James Foley and golf.  However, Will Bunch, linking to a New York Times article explaining the effort by various governments to effect the release of their citizens held hostage by ISIL, commented
A question....and a couple of observations. First of all, as the story makes clear, other nations pay ransom for hostages but the United States doesn't, although (unlike the ransom payers) America did try a military operation to rescue Foley. The argument against paying ransom is a sound one: That it simply leads to more hostage taking. But is this the right approach -- knowing that Foley could be alive today if we'd paid? I have to admit I'm torn on this one.
Also, as I'm sure some of you will amplify in the comments below, the story doesn't reflect particularly well on President Obama, and I'd have to agree. It's not that he wasn't on top of the situation -- he did order that failed rescue mission -- but his golf and general detachment were an unnecessary slap to the Foley family in their worst hour. I hope the president plays golf again....in 2017.


When Obama plays golf in 2017, there will be no need to be photographed.
If the President did not play golf, he presumably he would be spending his leisure time engaged in other pleasurable activities, just as President Bush 43 did by clearing brush (photo of bush from Center for American Progress; of Obama, from the Telegraph of the UK) and playing golf. Still, the optics in this case were hurtful to the family of the victim and did nothing positive for the President's image. 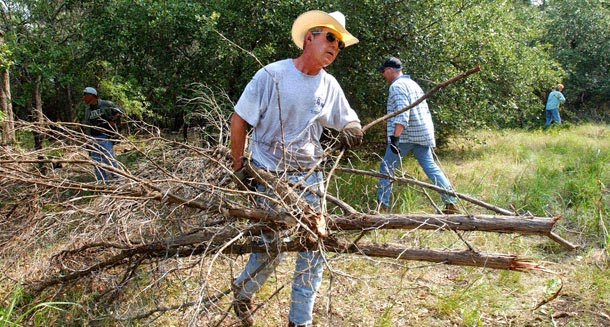 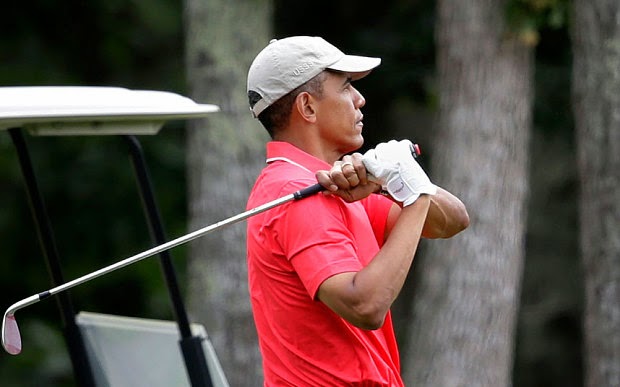 In this case.  It should not be inferred that President Obama, the nation's first black President, allows himself to be photographed playing golf with little concern for his image. He plays golf- and makes sure there are photographs and/or video- to enhance the view Americans (especially the moneyed interests which control the political process) have of him.
Republicans remind us we elected a black man as President in 2008 because they believe it it inoculates themselves from a charge of racial bias.  Some liberal Democrats remind us of the event because, they believe, it accounts for a substantial portion of the GOP's knee-jerk response to everything Obama. But too infrequently is it uttered that race plays a significan role in many of the policies undertaken by the President. Barack Obama has to prove- or believes he has to prove- that he's really no different than a white President.
Call it the unfortunate flip side of a bi-racial man who understands the experience of African-Americans in the USA and nonetheless bears no ill will toward white people.  It's the thoughtful- albeit destructive- response of a president born outside of the continental United States who was a community organizer in a big bad city, and who not coincidentally has been criticized especially harshly because of his (Muslim! Kenya!) background.
It should be no surprise, then, that Barack Obama has not been seen playing basketball- viewed as a sport favored by blacks- since Election Day of 2008.  Nor should it be surprising that he allows himself to be captured photographically playing golf, viewed as an activity favored by whites  Obama, Frank Rich once wrote (page 3 here), "falls hardest for the best and brightest white guys."  Putting for a birdie allows Barack H. Obama to hobnob with rich white fellows, whom he probably perceives as the best and brightest guys, and to be perceived as one in a long line of American presidents.