The Name Is Hillary. It's How We Refer To Our Celebrities.


Steve M. notes that an aide to Texas Senator Ted Cruz admits his boss (who wouldn't mind being president) is sponsoring numerous bills about Israel primarily to embarrass Senator Rand Paul, a rival who is anxious to become President.  With Cruz describing his foreign policy perspective as "the sweet spot" between that of Senator McCain and of Senator Paul, Steve-O concludes "suckers vote for Cruz."

Democrats have their own politicians blowing smoke up voters' posterior. The U.S. Representative who with his identical twin brother Julian is often described as a "rising star in Texas Democratic politics"
is endorsing Hillary Clinton through an email sent out by the low-dollar super PAC looking to galvanize support for a candidacy in 2016.
Castro made the endorsement in an email that Ready for Hillary sent out Monday, which was obtained by POLITICO.
“There’s no doubt about it: Hillary is the best person to be our 45th president,” Castro writes in the email.
“Hillary has always been a tireless advocate for working families — she’s never ceased to make sure everybody has a fair shot at achieving the American Dream,” he writes.
“Hillary’s the leader I want to see moving into the White House in two years,” he says.
“She hasn’t announced yet that she’s running in 2016, but Hillary needs to know that if she does, millions of grassroots supporters like you will be standing proudly by her side.
You and I both know Hillary would do amazing things as U.S. President — but it’s up to us to make these early moments count.”
There is no doubt about something, but it isn't that "Hillary" is the best person to be our 45th president. Actually, there is a lot of doubt about it.
But there is no doubt that "Hillary" does not need further affirmation of her standing as the odds-on favorite to be the Democratic presidential nominee in 2016.   It could be the Ready for Hillary SuperPac (items for sale from its Facebook page, below) which, CNN reports, "has held over 500 events across the country -- the majority of which were in early presidential primary and caucus states. All of those names, emails and phone numbers, along with some other details, go into the Ready for Hillary voter file." 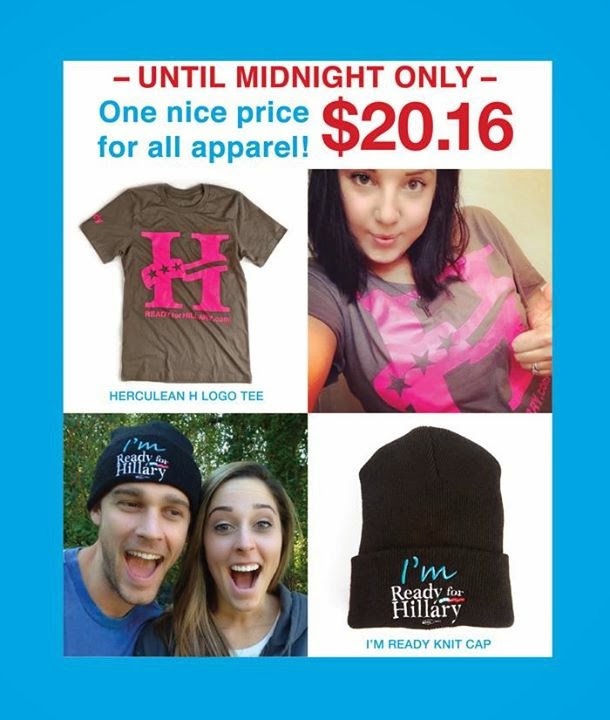 Or it could be the 60 Democratic members of Congress (19 Senators and 41 Representatives) who already have endorsed "Hillary." While twenty-three have done so publicly, 37 have told The Hill they're backing the former Senator and Secretary of State.
Were it that Mrs. Clinton "needs to know if she does run, millions of grassroots supporters.. will be standing proudly by her side," it would have been a year or so ago.
But wait!  It was nearly 16 months ago that RedState contributor Myra Adams- a conservative not inclined favorably toward the Clintons- detailed sixteen reasons she believed Hillary Clinton would be elected President in 2016.  And Adams did so without even mentioning that in our celebrity culture, "Hillary" has become the greatest living political celebrity other than her husband.
In the National Football League, despite its numerous faults, teams matter more than players. It is not Payton, Tom, Marshawn, Richard," or even J.J.  It's Payton Manning, Tom Brady, Marshawn Lynch, Richard Sherman, and even J.J. Watt, probably the best player in the game (who could so cutely be called "J.J."). However, in the celebrity- and personality- driven National Basketball Association, it was "Michael" (Jordan), then "Kobe" (Bryant), now "Lebron" (James).    And now it is "Hillary."
Astonishingly- no, unfortunately, it's not astonishing- that, as The Hill explains, "of Clinton’s supporters in Congress, 11 endorsed Obama over Clinton in the 2008 primary. They include Sen. Amy Klobuchar (D-Minn.) and Reps. Raúl Grijalva (D-Ariz.), Luis Gutiérrez (D-Ill.), Jim Moran (D-Va.), Hank Johnson (D-Ga.) and Danny Davis (D-Ill.)."  Representative Davis even admitted "I would jump off the Willis Tower, which is the tallest building in Chicago, to support Hillary Clinton," which suggests either blind allegiance or disturbingly little regard for human life.
Grijalva added "I was happy to support Barack Obama, and I'm happy to support Hillary Clinton." Perhaps someone should ask him about record-breaking prosecution of whistleblowers. Or spying on the American people. Or card check (remember that?). Or not prosecuting any top executive for his/her role in the most severe financial meltdown since the Great Depression. Or the federal minimum wage, stuck at $7.25 an hour. Or the "grand bargain," which would have cut Social Security and Medicare benefits.  Or endless war in the Middle East.  The examples themselves are nearly endless.
But that's not what it's all about, as Democrats are reluctant to acknowledge and Republicans fearful of charging. Over fifteen months before the Iowa caucus, before "Hillary"- or any Democrat- has announced for the presidency, over a third of the Senate Democratic caucus has seen starbursts, felt a tingle up his/her leg, or decided for reasons of ambition to endorse the party's probable presidential nominee. The outpouring has been simultaneously extraordinary.... and pathetic.