A Coward, But More

Donald Trump gave it all up at a rally in Fresno, California on Friday, arguing

So Obama gets on television. First of all, he's not supposed to be talking when he's in Japan about politics in our nation, OK? He's not supposed to. I think I got him rattled. He's the one that's rattled (if) you want to know the truth.

The truth, if you want to know it, is that Barack Obama is aware that, come hell or high water (neither a good option, though the latter preferable) he will leave office in January. He wasn't rattled by Sarah Palin, Mitt Romney, or ISIL, to which he has responded both seriously and calmly. He is not "rattled" over thoughts of who will succeed him.

Someone is rattled, however, and if words mean anything, that someone's initials are DT.  A man who is concerned about what an individual says about him in the Far East, then finds it necessary to accuse that individual of being "rattled," is himself scared.

Admittedly, that's an easy call after Trump backed out of a debate with Bernie Sanders.  In a statement released late Friday, Trump wrote

Based on the fact that the Democratic nominating process is totally rigged and Crooked Hillary Clinton and Deborah Wasserman Schultz will not allow Bernie Sanders to win, and now that I am the presumptive Republican nominee, it seems inappropriate that I would debate the second place finisher.

"The Democratic process is rigged,"  so I won't debate the individual who should have been nominated. Makes a lot of sense to those who believe up is down, right is left, summer is winter.

"Likewise," Trump continued, "the networks want to make a killing on these events and are not proving to be too generous to charitable causes, in this case, women’s health issues."  Originally, the candidate had proposed "a nice sum to charity."  Cenk Uygur of The Young Turks said his online network would give to the charity of the candidates' choice $1 million, a nice sum.  ABC would donate "any profits to a charity of their choice" and moments before Trump's announcement, chairman and CEO Richard  Hecker of technology company Traction and Scale offered a $10 million charitable donation to host the event. (And that wasn't all.)

That, too, is "a nice sum." Perhaps, though, Trump meant something quite different when he said "charity."  He concluded by saying- or typing- "Therefore, as much as I want to debate Bernie Sanders -  and it would be an easy payday - I will wait to debate the first place finisher in the Democratic Party, probably Crooked Hillary Clinton, or whoever it may be."

As much as I want to debate Bernie Sanders- and it would be an easy payday. The juxtaposition of "I" and "payday" makes it clear: Donald Trump expected to be paid to participate in the debate.  He was The Apprentice. He was the big draw in the GOP debates, and was convinced he was the reason they drew big audiences. He accepted Sanders' challenge but when networks started talking about charity, he knew he personally was going to be cut out of it.. When Trump claimed the networks "want to keep the money for themselves," he meant "what they won't give to charity, they want to keep for themselves rather than give to me."

Trump slithered out of the debate because he is a coward (photo from @brendanfillmore). But he accepted the initial offer because he thought he could make a killing. 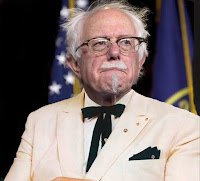 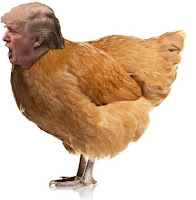