Adam Winkler, a constitutional law expert at the UCLA School of Law, calls Kennedy's opinion "an ode to living constitutionalism." With Kennedy's ruling, he says, the court makes clear that "the due process clause protects an evolving notion of liberty"....

Going forward, Kennedy's strong words could be cited in future cases and have an impact on issues that could reach (or return) to the courts, such as physician-assisted suicide and abortion. "This case is just one more nail in the coffin of originalism," Winkler says.

Remarkably, that was a law professor and not the actor with the same surname.   "Justice Anthony Kennedy," Amanda Marcotte finds, "has returned to his true form."  He did so when on Monday morning the Supreme Court in an unsigned opinion remanded to the lower courts a contraception-access case, Zubik v. Burwell (photo below from AP via Salon). Marcotte explains

At issue is a provision in the Affordable Care Act that requires insurance plans to cover a range of preventive services without a copay, which is intended to save money by encouraging people to get care that prevents expensive health problems down the road. The HHS included contraception services in the list of preventive service, after the Institute of Medicine issued a report outlining how no-copay contraception reduces unintended pregnancy and helps women space births, which reduces costs and improves birth outcomes....

A number of employers have come forth with claims that it violates their religious fredom to offer insurance plans that cover contraception. Rather than dealing with this in court, the Obama administration offered a compromise position: Religious employers don't have to offer insurance plans that cover contraception. All they need to do is sign an opt-out form, which will allow the insurance companies to offer the coverage to women directly.

Oh, sure, this is going to happen. The opinion, Marcotte adds, reads

The parties on remand should be afforded an opportunity to arrive at an approach going forward that accomodates petitioners' religious exercise while at the same time ensuring that women covered by petitioners' health plans 'receive full and equal health coverage, including contraceptive coverage."

A nice idea, but come on,he has to  know there's no way that will happen. That's because the plaintiffs arenot interested and have never been interested in "religious freedom." The goal here is stopping women fromgetting low-cost contraception, full stop.

Cultural conservatives usually are no more inclined to compromise than Donald Trump is to speak in modulated, nuanced terms. "These are people," Marcotte recognizes, "who pretend that it's onerous to sign a form. They have no shame, no decency, and no interest in good faith compromise. " Forced-birth advocates  rarely find any of that necessary.

Returning the case, though, became unavoidable because three Justices are known to side with the employers and four with the government, acting on behalf of women. Marcotte realizes

The only apparent purpose in stalling is so that whatever happens, it won't be on Justice Kennedy. If President Obama gets his appointee, Merrick Garland, affirmed, thenthere's (sic) five solid votes for common sense, and Kennedy doesn't have to worry about being the swing vote. Or, on the off chance that Republicans can stall the confirmationuntil they get a republican in office, Kennedy can hide in that guy's robes when they vote that women should be denied contraception access to suir someone else's religious beliefs.

We've seen this act, disguised, before. As a supporter of same-sex marriage, Marcotte probably does not fully comprehend the applicability to Justice Kennedy's opinion in Hodges of her remark that to the plaintiffs in Zika "any compromise that protects a woman's right to equal health care access and privacy is unacceptable to them because the goal is stripping women of  equality and privacy."

The dirty little secret of  the Supreme Court's 5-4 ruling was that it would not have been possible (given it was dependent on Kennedy's vote) on the legitimate basis of due process and/or equal protection basis alone.  Rather, in his majority opinion in the June, 2015 ruling, before Kennedy got around to throwing in a few comments about the Thirteenth Amendment, he emphasized

From their beginning to their most recent page, the annals of human history reveal the transcendent importance of marriage. The lifelong union of a man and a woman always has promised nobility and dignity to all persons, without regard to their station in life. Marriage is sacred to those who live by their religions and offers unique fulfillment to those who find meaning in the secular realm. Its dynamic allows two people to find a life that could not be found alone, for a marriage becomes greater than just the two persons. Rising from the most basic human needs, marriage is essential to our most profound hopes and aspirations....

Whatever the wisdom of the conclusion he reached, Justice Antonin Scalia could smell New Age reasoning when it reeked. He wrote

If even as the price to be paid for a fifth vote, I ever joined an opinion for the Court that began ‘The constitution promises liberty to all within its reach, a liberty that includes certain specific rights that allow persons, within a lawful realm, to define and express their identity,’ I would hide my head in a bag. The Supreme Court of the United States has descended from the disciplined legal reasoning of John Marshall and Joseph Story to the mystical aphorisms of a fortune cookie.

Of course, as a rabid conservative and cultural warrior, Scalia could not bring himself quite to admit "this whole idea of someone being not fully human unless married is a crock."  Neither could the left, for the outcome itself  was quite satisfying.

Satisfying, but not terribly significant, unless you  are gay, want to get married, live in a state which had prohibited same-sex marriage, and do not want to move to a state with a reasonably broad interpretation of the full faith and credit clause of the Constitution.

For all others, as the recent action/inaction of the Court indicates, Anthony Kennedy's swing vote in Hodges v.  Obergefell  was a freebie, a one-off with no applicability to anything except the right of gay people to live together with a legal document rather than to have to suffer through cohabitation without one. Now he has sided with extremists who, in pursuing an anti-contraception agenda, would block the reproductive rights, hence power in the marketplace, of half the population. 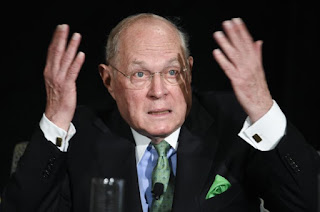