In any case, congressional legislation cannot be thoroughly evaluated without knowing the details of the legislation. However, that hasn't stopped Vox's Dara Lind or Salon's Daniel Denvir- both of whom have many times the readers I have- so it won't stop me. Lind explains that Senate Majority Leader Mitch McConnell has not decided whether to bring to floor for a vote the revised criminal justice reform bill which

Together, the changes mean that thousands of people will no longer get the chance to seek early releases from prison. The United States Sentencing Commission estimated that 2,317 current prisoners would be eligible for shorter "career criminal" sentences and another 2,500 would be eligible for the extra firearm sentence — though some of those 2,500 will still be eligible.

While "sentencing reductions for drug offenders are expanded," Lind writes, violent offenders would find it difficult to get their sentences cut. Lind laments

Other reforms are being narrowed in some ways, but broadened in others. Reduction of a 20-year minimum sentence for drugs, for example, is now not an option to any prisoner who's ever been convicted of a "serious violent felony" — but it's newly available to people with prior drug convictions if those convictions happened a long time ago.... prisoners wh'd been convicted of possessing a firearm during a violent crime would no longer have the chance even to apply for a shorter sentence. Only drug prisoners would.

If you're starting to get the idea that Lind is interested less in avoiding jailing individuals who pose little or no threat to the community than in a more general aversion to "incarceration," you've been paying attention. She argues

You simply can't fix mass incarceration in America if you're unwilling to shorten the prison sentences of anyone who could be considered a "violent" criminal. That's especially true in state prisons, where the vast majority of US prisoners are held and where half of them are serving sentences for violent crimes.

When politicians talk about criminal justice reform, they tend to leave out this inconvenient fact. They prefer to talk about "nonviolent drug offenders" — even when they're talking about state prisoners.

Well, of course, they talk about "nonviolent drug offenders"- violent offenders should not be living amongst the law-abiding.  Most people understand that, but do not if they are fixated, as Lind appears to be, on "fix(ing) mass incarceration."  The aim should be locking up individuals who should be locked up and allowing the others (presumably supervised) to remain at liberty. And the goal should not be "fixing" or ending "mass incarceration," but rather a safer society while maintaining the individual liberties guaranteed by the U.S. Constitution.

Lind at least avoids the disturbing bias displayed by Daniel Denvir (photo below from Reuters/Fred Thornhill via Salon). While noting "the federal legislation, of course, doesn't address state prisoners," he contends

it shows how emphasizing the plight of nonviolent offenders at the expense of the violent, while politically tempting, serves to perpetuate mass incarceration. Note the calls from Democratic officials and liberal gun control advocates for harsher mandatory minimums for illegal gun possession, which is another way to describe guns possessed by young black men.

Uh, no, it's not. It's another way to describe guns illegally possessed by individuals, which include young black men but also young white men and middle-aged men (less often, Hispanics and women). We should not subject our assessment of the danger posed by an anti-social act, such as illegal firearms possession, to a racial test. (This violation is in contrast to possession of marijuana for personal use, which is a relatively benign infraction and one for which a black is more likely than a white to be arrested.)

As does Lind, Denvir believes the goal of a criminal justice system is not justice but averting "mass incarceration."   Admittedly, one way to eliminate that greatest of all horrors is to open the jail cells wide to allow full, untrammeled liberty to individuals illegally possessing weapons.   It is, however, a prescription for a significantly more violent and lawless society. 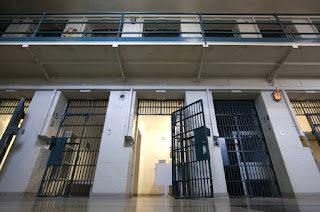