There will be an (R) After The Name

It was not especially funny and it wasn't very accurate, but Stephen Colbert was on to something when last night he said "Despite his long odds, Bernie just got a reminder that he's a serious contender in this race because Donald Trump gave him a nickname." Colbert then played a short clip of Trump remarking on Fox and Friends "I call him 'Crazy Bernie' because he's not very good."

Colbert went on to remark “I just hope that Bernie Sanders does not take this nickname lightly" because "these nicknames have destroyed all of Trump’s opponents. ‘Low Energy Jeb’ — gone. ‘Little Marco’ — vaya con dios. ‘Lyin’ Ted’ — see you, wouldn’t wanna be you.”

But Donald Trump didn't give him this nickname. Rush Limbaugh has been using the phrase for months, in this rant thrice not including his complaint (honestly, this was a complaint) that the mainstream media has been "treating Bernie as the crazy little lovable uncle in the rocking chair up the attic."

Of course,  both Limbaugh's frequent references to "crazy Bernie" and Trump's use of the term owe much to the inability or unwillingness of either to engage Sanders on the issues. They just might find that the American people are not so offended by Social Security, food inspections, free public education, and access to roadways.

But adoption of the term by rock-ribbed Republican Limbaugh and its appropriation by the party's presumptive presidential nominee point to something more significant.  As Steve M. pointed out, Politico has reported that the Trump

Kudlow is the intellectual forefather of supply-side economics, in which revenues climb as taxes decline, which has proven (graph below from here) as utterly absurd as it sounds.  Not your grandfather's- or anyone's- populists, he and Moore

also said they would recommend letting corporations use “immediate expensing of equipment” for tax purposes to spur investment and economic growth. This has become a top priority for many Republicans, though it wasn’t in Trump’s original plan. 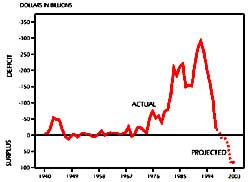 It wasn't in Trump's plan as long as he was running as the anti-establishment alternative to Republicans tied to the establishment. Now faced with the critical task of mending fences with movement conservatives, the billionaire may recognize there is no better way to the heart of the GOP establishment than through a plan to reduce taxes on the wealthy and blow up the deficit (graph above from zFacts; its data from Bush 43 OMB).  He already has borrowed Rush Limbaugh's nickname for Bernie Sanders, and his transformation into a true-blue conservative while maintaining the bombast, belligerence and bravado of a faux populist may have only just begun. 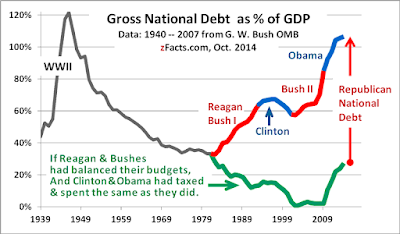