Giving A Pass To States

Like the late Rodney Dangerfield, the crime bill signed into law by President Clinton can't get no respect. Contrary to popular belief, it was not called the "Possession of Harmless Drugs for Personal Use Act" but the "Violent Crime Control and Law Enforcement Act of 1994."

Disparagement of the legislation enacted when violent crime was nearly double what it is today continued Friday when, according to Nolan McCaskill of Politico, Mr. Clinton

was forced — once again — to defend the 1994 crime bill he signed into law that has stoked the ire of protesters and dogged him and Hillary Clinton on the campaign trail.

The former president, out stumping for his wife in Paterson, New Jersey, launched into a combative back-and-forth with an audience member, who pointedly asked Clinton, "Why did you put more people in prison?"

Now that was a powerful President- not only was he Commander-in-Chief of the Armed Forces, he also was an armed policemen arresting suspects and singlehandedly yanking them behind bars. Understandably

Clinton challenged the questioner about whether he really knew the ins and outs of the now-controversial law, noting that the crime bill included a provision that exempted first-time drug offenders from being covered under the excessive sentencing laws.

“Did you know that? I bet you didn’t,” Clinton matter-of-factly told the audience member, who was eventually escorted out of the rally.

The two Democratic presidential candidates are openly scornful of the astonishing rate of incarceration (Wikipedia) and the disproportionate impact of "mass incarceration" and over-policing upon the minority community.  Republicans recognize there is little value in defending legislation enacted into law by a Democrat- any Democrat, though especially by the spouse of the likely Democratic presidential nominee. It is thus left to Bill Clinton, who

continued his defense, adding that 100,000 police officers were placed on the streets and an assault weapons ban with a clip limit was passed that, coupled with a background check law, led to a 25-year low in crime, 33-year low in murder and 46-year low in illegal gun deaths.

“We could not pass that bill without the higher sentencing. More than a year ago, I went to the NAACP and I said that the sentencing laws were way overdone and we needed to lower them,” Clinton said, noting that before the end of his administration he began a process to pardon and commute sentences that President Barack Obama has finished. “I am all for this. We overdid the sentencing in the ‘90s. We need to reverse it.” 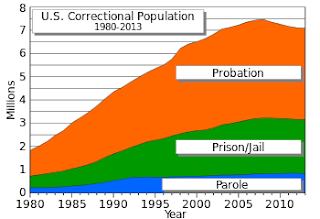 No, we do not need to reverse it- that is the crisis mentality that got us here in the first place as the nation reacted impulsively to the spike in violent crime of the '80s and early '90s.

Notwithstanding the Act's positive items cited by Clinton (and inartful praising by Politico), the law merely contributed, rather than led, to a 25-year low in crime.   A year ago, Vox's Dara Lind and German Lopez summarized sixteen theories for the remarkable drop in crime in the USA since the mid 1980s. The two most applicable to the 1994 act, "more criminals are getting put in prison" and "more police on the streets," appear to account for probably approximately 10% of the reduction.

"This ain't chopped liver" but must be judged against the harm created by the legislation.

The direct harm was minimal, at most.  President Jeremy Travis of New York's John Jay College of Justice has noted the "trend of increased incarceration had already started two decades before 1994" (graph below from the Brennan Center for Justice), though Fact Check explains

The bill included a federal “three-strikes” provision which required mandatory life imprisonment without possibility of parole for those who commit federal violent felonies if they had two or more previous convictions for violent felonies or drug trafficking crimes. In his mea culpa in August, Clinton said that while most people are in prison under state law, “the federal law set a trend.”

Disagree, if you wish, with a provision mandating lifetime incarceration for individuals who have committed three violent felonies, or one violent felony and two crimes involving drug trafficking. I'm not signing onto that. However, Fact Check adds

The bill also had a more direct impact on state prison populations. It included $8.7 billion for prison construction to states that passed “truth-in-sentencing” laws requiring that people convicted of violent crimes serve at least 85 percent of their sentences. The New York Times at the time noted that those convicted of violent crimes served “55 percent of their sentences,” citing Justice Department data.

If with the additional prison construction a great many prison cells were left vacant, some jurisdictions presumably were encouraged to alter their approach to sentencing and/or policing. Nonetheless, they were not forced to do so. Moreover, because filling even empty cells increases marginal cost, they likely were motivated by a desire to protect against violence- or to curry favor with- an elecorate justifiably fearful of street crime.

Significantly, the latter would be of limited value in a state, such as New Jersey, wise enough not to elect Judges or prosecutors.  Most people are in prison under state law,  Bill Clinton mentioned, undoubtedly with insufficient emphasis. With only six percent (6%) of all prisoners incarcerated in a federal institution, the individual typically is arrested under state laws; prosecuted by a county or state employee; sentenced by a county or state employee; and sentenced to a state prison.

Good luck getting that argument firmly embedded into the national conversation.   The left, outraged and energized that there are more people incarcerated in the USA than anywhere else, stresses race rather than our faulty federalist system. The post-WW II right still plays to the fears its followers have of the federal government. Barry Goldwaters's principled and misguided opposition to the 1964 Civil Rights Act because of is infringement upon states, Ronald Reagan's pander to bigots as he invoked states' rights a few miles from the murder of three civil rights activists, and  Bob Dole's obsession with the Tenth Amendment all characterize the GOP's infatuation with state governments. The issues have changed, the rhetoric has shifted, but all Republican politicians hail the virtues of state and local governments, however biased and corrupt they may be. 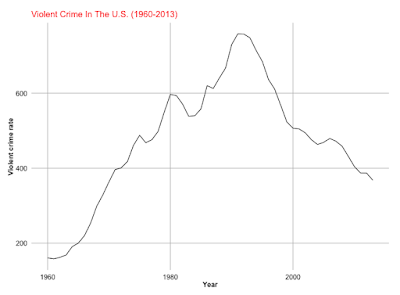