On April 9, I slammed Bruce Springsteen (his house in Beverly Hills, below) who had announced that he had cancelled the concert his E Street Band was due to hold in North Carolina. The legislature had passed HB 2, which rescinded a recently-passed ordinance in Charlotte extending some rights to transgendered individuals. In addition, it rendered invalid ordinances granting rights to LGBT persons in other municipalities.

I noted that Springsteen was due to perform on April 12 in the capital of a state whose governor, a major candidate for President, had less than two months earlier enacted legislation which effectively defunded Planned Parenthood.   Cancelling that appearance, as unlikely as it would be, would strike a blow in support of women's health. 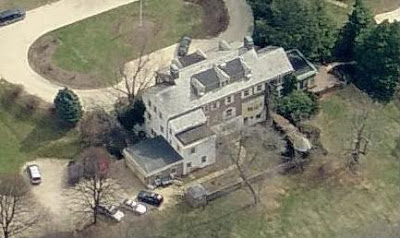 Health care would have been a great place to start or to demonstrate that outrage is not selective. Vox's Emmett Rensin, writing a piece in which he argued that the land is beset with smug liberalism, remarks

The rubes noticed that liberal Democrats, distressed by the notion that Indiana would allow bakeries to practice open discrimination against LGBTQ couples, threatened boycotts against the state, mobilizing the considerable economic power that comes with an alliance of New York and Hollywood and Silicon Valley to punish retrograde Gov. Mike Pence, but had no such passion when the same governor of the same state joined 21others in refusing the Medicaid expansion. No doubt good liberals objected to that move too. But I've yet to see a boycott threat about it.

And he won't, either.  Nor would he if Springsteen, soon to embark on a European tour, had anything planned in Indianapolis. But be comforted his concert in Columbus, Ohio was a smash hit:

Rethinking or retooling an album once it is released is far less likely than regretting it.

Though few artists would regret releasing an album such as Bruce Springsteen’s fifth release, 1980's “The River,” whose 20-song double album raised eyebrows for its length and sprawling themes, the Boss revisited the entire album, song-for-song, in Value City Arena on Tuesday night. The tour supports “The Ties That Bind: The River Collection,” a multi-CD reissue....

He's the party boy of the new age, too, willing to put it on the line to protest a bad law in North Carolina while worse atrocities go on elsewhere.   At some point, Hollywood and Rumson, NJ may hear the cries of poor people without health care or of women who need STD testing, HIV testing, reliable contraception, and cancer prevention and treatment, but don't bet your $429 on it.