When A Gun Is Not A Gun

Jamelle Bouie has passed on a tweet from a Chris Geidner reading "You have got to be kidding but you aren't."

The head of the line officers' union in the Cleveland Police Department surely is serious when, according to the Cleveland Plain Dealer's Eric Heisig, he

says the family of 12-year-old Tamir Rice should use money from a $6 million settlement to educate children about the use of look-alike firearms.

Steve Loomis, the president of the Cleveland Police Patrolman's Association, was criticized on a national scale for statements he made to the media in the weeks and months after two officers in his union were involved in Tamir's death.

The usually talkative Loomis issued a news release that said "we can only hope the Rice family and their attorneys will use a portion of this settlement to help educate the youth of Cleveland in the dangers associated with the mishandling of both real and facsimile firearms.

"Something positive must come from this tragic loss. That would be educating youth of the dangers of possessing a real or replica firearm," the release continues.

The release comes in the wake of the city's decision to settle a lawsuit brought by the family. The settlement, announced Monday, releases the city and officers Timothy Loehmann and Frank Garmback, who were involved in the shooting, from all claims.

The officers- at least Loehmann, who never should have been hired- appear to be quite lucky given that

Loehmann shot Tamir outside Cudell Recreation Center on the city's West Side. He and Garmback were responding to reports of a "guy" with a gun, and both said they saw Tamir reaching into his waistband to grab a gun when Loehmann opened fire.

Tamir had an airsoft pistol in his waistband. The pistol had the orange safety tip removed. Neither officer was criminally charged.

Loomis has used Tamir's shooting to show that police often cannot tell the difference between real and replica firearms. He has stood by both officers following Tamir's shooting, saying their actions were justified.

This argument has not gone unanswered for, Heisig notes

Subodh Chandra, an attorney representing the Rice family, blasted Loomis' release in an emailed statement. He said that the comments "reflect all that is wrong with Cleveland's police division — he managed to (1) blame the victim, (2) equate the loss of the life of a 12-year-old child with the officers facing scrutiny, and (3) demand money from the victim's family and counsel."

It would be dereliction of duty for the head of the union not to defend the action of his members. except in extraordianry circumstances. Nonetheless, commenting "we have maintained from the outset this has been an absolute tragedy for the Rice family as well as our involved Officers and their families" does minimize the loss of life.

But the thrust of Chandra's criticism is that Loomis chose to "demand money from the victim's family and counsel."   It is not the responsiblity of the victim or even his attorney to subsidize a cause designated by Mr. Loomis- or any cause whatsoever.

Still, the union chief has a point.  A slide show accompanying the Plain Dealer article demonstrates how difficult it is to determine the difference between a real firearm and a fake one.  (In the picture below, one pistol is Loomis' service revolver and the other is a toy gun used in a robbery in Cleveland.) 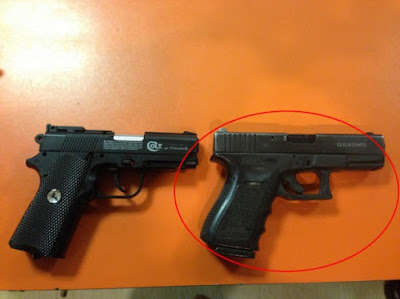 The paper encourages readers to take the test. If you do, you'll probably notice that Chandra has let industry off easy. It is the attorney's responsibility to defend the family, not to advocate safe or effective social policy. However, in a presidential campaign which has included one candidate attacking another for being insufficiently appalled by mass shootings, no mention has been made of the issue raised by the head of the Patrolman's Association.

Well over a year ago, a state representative in Ohio, Alicia Reese, introduced legislation which would require a fake gun to be easily distinguished from the real thing.  We couldn't expect the likes of Donald Trump, Ted Cruz, or John Kasich (though governor of Ohio) to speak up. We should, however, have expected Hillary Clinton or Bernie Sanders to have done so and now that Steve Loomis- insensitivity notwithstanding- has done so, there is even less excuse.