There are more important issues than Kelly Ripa's quarrel with ABC, and more important persons than Kelly Ripa. However, in the wake of Ripa's sudden departure from "Live with Kelly and Michael" for a few days after she was suddenly told that Michael Strahan was being reassigned, Salon's Mary Elizabeth Williams believes the female host (photo from Reuters/Danny Moloshok) "leaving the show is as feminist as it gets."

Ripa is "not some petulant amateur," Williams contends, but "a 45 year old adult we’re talking about here, a person with a lengthy and proven television track record."   And given there is no male equivalent of "diva," Williams correctly points out that Ripa should not be accused of "classic diva-like behavior" and "having a diva-like fit of pique."

Still, if you're told immediately before broadcast on a Tuesday of a major decision, then on Wednesday call in "sick" without explanation and remain out of work for a few days, there seems no more adequate description than "petulant."

Taking a stand is so much easier when one has a bank acccount which reflects an annual salary of $20 million, presumably earned because of her value to the network. The popularity of the celebrity Williams calls "America's sweetheart" allows her the uncommon luxury of taking a few unscheduled days off unannounced.

Somewhere in Oklahoma today there is an unmarried woman working three jobs, two of them at minimum wage.  In Minnesota, a married woman leaves her husband, drastically reducing the income available to take care of herself and her children, because she is being physically abused by her husband.   In Pennsylvania, a woman is offered a very lucrative job requiring additional time from home, but remains working as a teacher, a social worker, or a speech therapist so she can spend more time at home with her children.... or to volunteer in a fire house, nursing home, or church.

Workers throughout this nation are given little or no warning when their co-worker is transferred by the company, as Strahan has been.  Rumor has it that a worker can be summarily dismissed, sometimes for no more reason than she is no longer needed by the employer.  Some of them are an ethnic minority, some not, but none of them protected by "white privilege." Most of them do not have a full-time job requiring only four days of work a week, as has Ms. Ripa.

She may be an unmarried woman in Oklahoma working three jobs, two of them at minimum wate. Perhaps it's in Minnesota, where the unmarried woman leaves her husband,drastically reducing the income available to take care of herself and her children, because she is being physically abused. Or maybe in Pennsylvania, where a woman is offered a very lucrative job requiring additional time from home, but remains a teacher, a social worker, or a speech therapist so she can spend more time at home with her children- or volunteering in a fire house, nursing home, or church.

We can be certain that Ms. Ripa- unlike so many of other women- will land on her feet. She will not have to wait anxiously at her mailbox for a workmen's compensation, or unemployment compensation, check. Her current employer will be patient with her, and she will be quickly hired somewhere if she chooses to leave the corporation.

There are countless courageous deeds- frequently selfless- committed everyday by feminists and other women.  They often are heroic actions taken by very vulnerable women. Inform Ms. Williams: Kelly Ripa does not qualify. 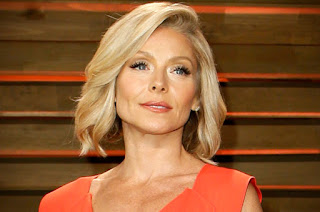 And there's a woman running for president who hauls in $250,000 an hour for talking to corporate political donors. And she was a Mets fan while campaigning in Queens. This week, it's go Phillies, Pirates,76ers, Steelers, and there may be another football team.