Giving Us Another Chance


In her closing statement at the Democratic debate in Brooklyn, Hillary Clinton asked

for your support again in the primary on Tuesday to continue that work together, to take what we did in New York and to take those New York values to the White House, and put them to work on behalf of all of our people, to knock down the barriers that stand in the way.

You know, of course we have economic barriers. I’ve been fighting against those trying to even the odds most of my adult life. But we also have racial barriers, gender barriers, homophobic barriers, disability barriers.

There was nothing new there, and that's what makes this statement significant. Commenting on the analysis in the Atlantic by David A. Graham of the debate, Atlantic Senior Editor for Politics Yoni Applebaum wrote

It’s an argument aimed at the heart of the contemporary Democratic Party. Sanders has consistently stressed the primacy of economic questions—solve those, he argues, and other forms of discrimination will diminish. But Clinton has stressed the persistence of other prejudices, and called for addressing them directly, as she did tonight. Young voters—even young minority voters—tend to think Sanders has the better of the argument. But older voters disagree, and Sanders can’t win without them.

It is an argument aimed at the heart of the contemporary Democratic Party because that Party is a collection of interests- ethnic minorities, disabled persons, gay people, public sector union members, unmarried women.  They're very worthy interests and constitute the dreaded "special interests" no more than do other Americans.

It comes as no surprise to voters that while Senator Sanders has not ignored the interests of people who are disabled, gay, female, or of minority status, he has tried to draw attention to the economic concerns and interests of all individuals, whether or not they identify with any of these groups.Bernie Sanders would not be able to draw attention exclusively to the status of the 99% as the 99% if he wished, which he most assuredly does not, and never has, from his days as a civil rights activist through his tenure in the United States Congress and his campaign for President.

In a myriad of ways, Democrats at the state and national level have been trying to level the playing field for the individuals disadvantaged by gender, sexual preference, disability, race, or employment status (the last, to a declining degree).   Sanders has not asked any of these individuals,or the ones who care about them, to forego their identity or their efforts to gain the rights or benefits they need.

Still, a  little balance is in order. Those groups (except for the latter) and their allies have successfully chipped away at discrimination and other barriers preventing full participation in American life. There is, however, one group which has been stymied, and in fact has lost ground.  That is, as variously described, the poor and middle class, the 99%, even the 99.9%. It has been largely ignored by the Democratic Party and pummeled by the Republican Party.   Usually, with age comes wisdom. Not in this case, in which young people have noticed what their elders haven't.

In 2007-2008 John Edwards suggested the quaint notion of "two Americas." Voters didn't much care, with their attention diverted to two bright, shiny objects, one becoming a president who hasn't met a job-killing trade deal he doesn't like.  The other has returned, and we know where her focus is not.

In his new book, Listen, Liberal, or What Ever Happened to the Party of the People, Thomas Frank described the "entrepreneurs first" doctrine dominating the "innovation economy" which has taken hold in the Democratic stronghold of Massachusetts.He lamented (from excerpt in Salon)

The answer is that I’ve got the wrong liberalism. The kind of liberalism that has dominated Massachusetts for the last few decades isn’t the stuff of Franklin Roosevelt or the United Auto Workers; it’s the Route 128/suburban-professionals variety. (Senator Elizabeth Warren is the great exception to this rule.) Professional-class liberals aren’t really alarmed by oversized rewards for society’s winners. On the contrary, this seems natural to them — because they are society’s winners. The liberalism of professionals just does not extend to matters of inequality; this is the area where soft hearts abruptly turn hard.

Franks points out "When you press Democrats on their uninspiring deeds — their lousy free trade deals, for example, or their flaccid response to Wall Street misbehavior — when you press them on any of these things, they automatically reply that this is the best anyone could have done" (photo below from Salon, which credits the AP and two photographers). However, it was not the best we could have done eight years ago, and Bernie Sanders is around to remind us it's not the best we can do now. 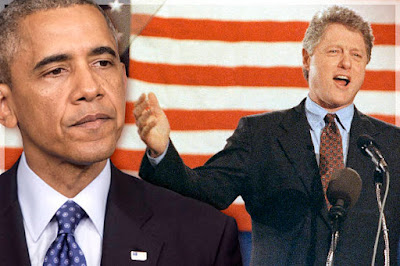