"The prevent defense," the saying goes, "prevents you from winning."

Extremely popular among fans, the cliche is astoundingly invalid. The prevent defense virtually assures that team a victory though often allowing an inconsequential field goal or touchdown, it is unpopular with fans as well as gamblers.


In New York State, Hillary Clinton has been placing her confidence in the prevent defense. USA Today reported Wednesday

Hillary Clinton is keeping a lid on Bernie Sanders’ appeal in New York — by touting her Senate record upstate and pounding him on the gun issue in the Big Apple.....

Sanders has also fared best in states where the population is less diverse, so the demographics upstate, which is whiter than New York City and surrounding areas, could favor him as well.

Touting her effort in the Senate to help upstate New York, criticizing Sanders' record on gun control, even knocking her opponent's recent interview in the (New York) Daily News does not represent an aggressive, no-holds barred campaign, but rather one reflecting her early (now diminished), big lead in the state.

Skeptical of this notion, one might argue that on the issues (except- arguably- gun safety), Sanders is more in tune with the Democratic primary electorate and that stressing policy would be foolhardy.

But not on everything. Just in time for the New York primary, the Sanders campaign has hired Simone Zimmerman as its Jewish outreach coordinator. According to The Jerusalem Post

During the 2014 Gaza war, Zimmerman was one of the leaders of a group of young Jews that held regular protest vigils outside the offices of the Conference of Presidents of Major American Jewish Organizations, reading the names of Palestinians and Israelis killed in the conflict.

It's hard to argue with non-violent protest of the deaths of thousands of civilians killed in war. Moreover, the BDS movement has gained steam, especially in ecclesiastical circles and has become, distressingly, arguably mainstream. Therefore, it is barely eye-opening that Zimmerman

opposes Israel’s occupation, wants Hillel to allow participation by groups that support the Boycott, Divestment and Sanctions movement against Israel, is against Jewish federation funding for Israeli projects in the West Bank and wrote favorably of the efforts of Jewish Voice for Peace, a pro-BDS group, to get “international corporations to stop profiting off human rights abuses.”

However, we learn that she has gone a little off the rails, for

“The hypocrisy of expecting feel-good social justice projects to offset millennials’ deep outrage at the grave injustices committed by the Jewish state is almost too much to bear,” wrote Zimmerman, who is in her mid-20s. “No public relations trick can save Israel’s image. The problem isn’t with the hasbara [public relations]. The problem is nearly 50 years of occupation. The problem is rampant racism in Israeli society. The problem is attacks on human rights defenders by extremists and by the state. The problem is a Jewish establishment that ignores or justifies all of this.”

Like many people- especially activists- nowadays, Zimmerman (from Instituto Manquehue, of her from 2/11) is unaware that sometimes accuracy is no defense and, in this case, should not be. Fortunately, she since has deleted from the profanity from her Facebok entry “Bibi Netanyahu is an arrogant, deceptive, cynical, manipulative asshole. Fuck you, Bibi.” 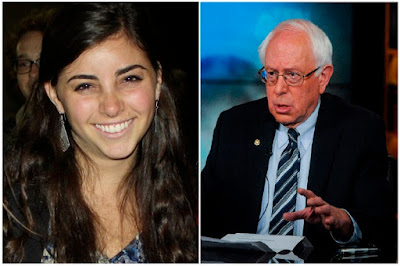 (Sarcasm ahead) Heck of a good hire.  Nothing says pluralism and tolerance better than hiring someone who tars the Israeli people with an accusation of "racism." Michelle Goldberg (a Clinton supporter) recognizes that support for Israel as a Jewish state is significantly less among young voters than among the older generations. Nonetheless

The question, to me, is not whether it’s OK as a matter of principal to called Netanyahu an asshole—he most assuredly is. It’s whether a Democratic candidate for president can afford to be associated with that sentiment. Whatever your views about god and Zionism, to answer yes is to take a leap of faith.

Ultimately, a Democratic (or Republican) candidate for President cannot afford to be associated with that sentiment.  Ultimately will not be far off if Mrs. Clinton jumps on this.

Victory in a state primary, unlike victory in a football game, is a mere aim, not the goal. Playing defense and failing to exploit (or at least criticize) the remarkable addition of Simone Zimmerman to her rival's staff would  be curiously cautious prior to a contest in a state home (still) to far more Jews than anywhere in the USA. Call it Hillary Clinton's inexplicable entry in a year in which the other Party's leading candidate is unfailingly inexplicable.