"On Monday," The New York Times editorial board writes,

a spokesman for Mrs. Clinton said she would release additional health information in coming days. For his part, Mr. Trump said he would make public “very, very specific” records, a remarkable promise coming from someone who has resolutely stonewalled on his tax returns. Should both candidates honor these pledges, and provide plenty of detail, the winners will be the voters.

Hillary Clinton's recent bout with pneumonia has put into sharper focus the health of the 69-year-old former Senator and of the 70-year-old con artist who opposes her.

God, however, is in the details.  The Clinton campaign will release considerably more information than it has but- because HRC is a normal, conventional candidate- will be accused of holding some back.  The Trump campaign has signaled it will do something different.

In a celebrity culture in which one of the major party candidates was known to much of the country primarily for being a "reality" TV star, it probably is not stunning that Donald Trump has announced that he will announce the results of some sort of physical examination on The Dr. Oz Show.

Dr. Oz is not quite the quack some people make him out to be but his concerns have been for a long time more commercial than... well, almost anything. One health care blogger explains

Oz’s flock listens to Oz because he is Mehmet Oz. He is a brand. They couldn’t care less that he is from Columbia. He got his break not because of the number of publications or the impact factor of his publications, but because he was endorsed by Oprah Winfrey.

It's only fitting that Donald Trump would choose that venue to release records, or results, or whatever he will claim they are, in another effort to punk Americans.  Similarly, the letter in which the candidate was proclaimed by his gastroenterologist(!) (photo from NBC News) to be in incomparable physical condition read

To Whom My Concern:

I have been the personal physician of Mr. Donald J. Trump since 1980. His previous physician was my father, Dr. Jacob Bornstein. Over the past 39 years, I am pleased to report that Mr. Trump has had no significant medical problems. Mr. Trump has had a recent complete medical examination that showed only positive results. Actually, his blood pressure, 110/65, and laboratory test results were astonishingly excellent.

Over the past twelve months, he has lost at least fifteen pounds. Mr. Trump takes 81 mc of aspirin daily and a low dose of s statin. His PSA test score is 0.15 (very low). His physical strength and stamina are extraordinary.

Mr. Trump has suffered no form of cancer, has never had a hip, knee, or shoulder replacement or any other orthopedic surgery. His only surgery was an appendectomy at age ten. His cardiovascular status is excellent. He has no history of ever using alcohol or tobacco products.

If elected, Mr Trump, I can state unequivocally, will be the healthiest individual ever elected to the presidency." 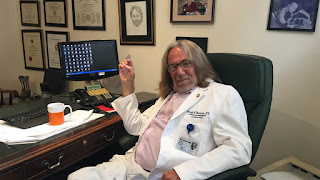 The relatively few critics not intent on helping Trump make his run competitive noted that the document was addressed "to whom my concern," with praise of  "extraordinary" physical strength and stamina, referred to favorable tests as yielding "only positive results," and compared the subject's health to that of 44 presidents, many of whom Dr. Bornstein may not have personally examined.

That suggests the letter was written by the candidate himself, who at times has described himself in almost superhuman terms. However, decades ago in Harvard Medical School Bornstein reportedly was an excellent student

who laughed and joked with his friends while making his way through lectures and rotations. Medical school was taxing — for the first two years, Bornstein and classmates spent 8 hours a day, 5 days a week, in the classroom, a classmate recalled. Bornstein would sit with a group of friends during the lectures.

“He had long hair. He was irreverent. He sat mostly near the back of the room — where most of us did — and paid varying degrees of attention to what was being said at the time,” said Dr. Edward Hurwitz, who was friendly with Bornstein in medical school.

"I think it was easy for him," commented a friend and colleague of Trump.

Dr. Bornstein, if he in fact wrote the letter himself, composed it swiftly while his patient's limousine was outside awaiting the candidate. If he did, though, he calculated that the ludicrous letter would be taken as a joke and would make Trump appear as even more of a cartoon figure than he obviously is. He calculated wrongly, however, not realizing that a media more concerned with balance than with fairness, objectivity, or fact would give a pass to a candidate so absurd as to try to pass off to voters as valid such farcical information.