Reparations Are For Consciences, Not For Students.

Student debt isn’t just a problem for job-hunting millennials -- it also could take a toll on retailers. As an increasingly large portion of Americans’ budgets go to repaying the loans, there’s less money left over for sweaters or home goods. Annual student debt payments have reached about $160 billion in the U.S., according to Moody’s Investors Service. That’s more than the yearly revenue of Amazon.com Inc., Home Depot Inc. and other major retailers. 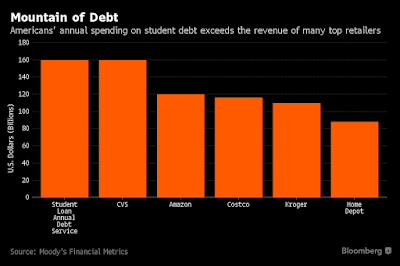 Student debt is foremost on the minds of many American families. 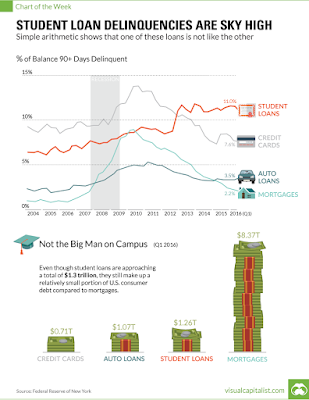 It is not so at one elite university in an elite section of the nation's capital, however. Instead

Centuries after Georgetown University sold slaves to keep its doors open, the elite school is taking major steps to right its wrongs. Descendants of the people it sold in 1838 will now receive preferential status during the admissions process — possibly the first concession of its kind.

The State of Texas almost twenty years ago instituted a Top 10% Plan, "which guarantees students ranking in the top 10-percent of their high school class admission to any state universities along with increased financial aid."  Students with great potential with the misfortune  of attending a low-ranking school, often in poor districts, are thus given a hand up. Georgetown, however, will do it upon the color of a student's skin, regardless of his or her current circumstances.  And they're taking other measures to salve their conscience in that

administrators also announced on Wednesday that the school will erect a memorial to honor the slaves who built the school and publicly apologize for its involvement in the slave trade. One of the buildings that was formerly dedicated to a slave master will be renamed after a slave, and a second will be renamed after a prominent black educator. And the school will open a designated institute for people to study slavery.

If slavery isn't already part of the history curriculum at Georgetown University, the school's students are being very poorly served, indeed.   Evidently, the Jesuits were prompted in their actions because

The changes come nearly one year after hundreds of students rallied on campus and staged a sit-in outside President John J. DeGioia’s office, calling on the school’s leader to address racism on campus. The hostile environment, they argued, was a direct product of Georgetown’s historic ties to slavery.

There is no mention of what the "hostile environment" constituted or who was responsible for it. There is no need for that, evidently, and no need to assess responsibility.  Apparently there is a sordid history attached:

Not only did slaves build the Jesuit school, but the priests who ran it also sold 272 of them — including children — to Maryland and Louisiana plantations, in order to pay off the institution’s debts.

These student activists already successfully fought for slave owners’ names to be removed from campus. But now, the school is going even further.

Of course they aren't emphasizing eliminating the honor granted the individuals responsible for the institution's connection to slavery, which would be actually holding people accountable (albeit after death) and sending an important message.  Instead

Before student activism drew national attention to the school last November, DeGioia created the Working Group on Slavery, Memory and Reconciliation to devise meaningful ways for Georgetown to atone for its past sins. The working group — a handpicked group of students, faculty, and alumni — was integral in coming up with the action plan announced on Wednesday.

Now that's a  working group which will carefully assess facts, rationally assess pros and cons, and devise a wise solution.  And I am the King of Jordan.

In related news, full-time tuition, exclusive of any other costs, at Georgetown University has increased by $3,768 in the past two years to a mere $49,968,  We await the intstitution's statement explaining how its dandy new institute will decrease student costs or student debt.