Even supermodels and actresses deserve their opinion, and Kate Upton gave hers in a Facebook posting and on Instagram:

In my opinion, the national anthem is a symbolic song about our country. It represents honoring the many brave men and women who sacrifice and have sacrificed their lives each and every single day to protect our freedom. Sitting or kneeling down during the national anthem is a disgrace to those people who have served and currently serve our country. Sitting down during the national anthem on September 11th is even more horrific. Protest all you want and use social media all you want. However, during the nearly two minutes when that song is playing, I believe everyone should put their hands on their heart and be proud of our country for we are all truly blessed. Recent history has shown that it is a place where anyone no matter what race or gender has the potential to become President of the United States. We live in the most special place in the world and should be thankful. After the song is over, I would encourage everyone to please use the podium they have, stand up for their beliefs, and make America a better place. The rebuilding of battery park and the freedom tower demonstrates that amazing things can be done in this country when we work together towards a common goal. It is a shame how quickly we have forgotten this as a society. Today we are more divided then ever before. I could never imagine multiple people sitting down during the national anthem on the September 11th anniversary. The lessons of 911 should teach us that if we come together, the world can be a better and more peaceful place #neverforget.

Inasmuch as Ms. Upton is a celebrity rather than a politician, her opinions likely will spark insufficent outrage.  "Patriotism," it was traditionally noted, "is the last refuge of a scoundrel" and Upton, uncomfortable with dissent, advises all to "put their hands on their heart and be proud of our country for we are all truly blessed."   She doesn't mention what she thinks or feels about a major party presidential candidate who argues that "poverty and violence at home, war and destruction abroad" characerizes what she refes to as "the most special place in the world."

Sitting or kneeling down during the national anthem is not a disgrace to those people who have served, especially because it is unrelated to the military. Some NFL players chose to sit on September 11 because the games, held on Sundays, were by coincidence this year played on September 11.  If the NFL were as offended by the protests as was Ms. Upton, it could have postponed them, though it would have come at enormous expense. That is, however, when the games were played, which appears not to concern Ms. Upton.

It is disturbing that Upton believes that the right to protest should be exercised in this special and blessed place only by individuals she agrees with or who don't interfere with her enjoyment of an athletic event. She believes some people should "use the podium they have (and) stand up for their beliefs" but only after"the song is over."

Alas, notwithstanding current practice at concerts, sitting during a song is not prohibited by law, and the Kaepernickians have chosen to take their stance not by making rude gestures, shouting over the song, or throwing a football during the Star Spangled Banner, but rather by a tasteful, quiet, even respectful display.

That might be contrasted with some of the images (not posted for prurient interests) of Ms. Upton on her Facebook page.  Though flattering, they are quite proudly displayed by someone who characterizes sitting quietly as "a disgrace." 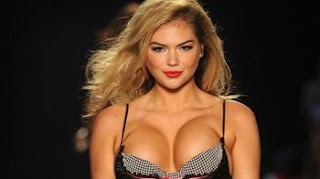 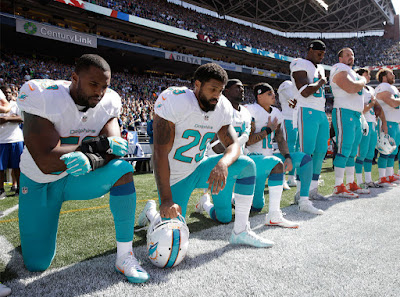 Most significantly, Upton fantasizes "Recent history has shown that it is a place where anyone no matter what race or gender has the potential to become President of the United States." This may be termed the "we elected the black guy president, now can you liberals please shut up?" argument. In the country in which neither race nor gender is an impediment, a demonstrably, arguably uniquely, qualified woman now is in danger of losing a presidential election to a male candidate who remarked "There was blood coming out of her eyes, blood coming out of her wherever." Upton may want to reconsider that gender thing.

As demonstrated by the presidential campaign of an individual who thinks so little of the USA that his slogan is "Make America Great Again," we have ceased to "work toward a common goal." Upton appears unaware the protestors are not trying to divide Americans but to draw attention to what they believe is unconscionable treatment toward minorities. If- as it is clear- Kate Upton disagrees with that perspective, she should state clearly, loudly if she chooses, her disagreement with their view of the connection between race and law enforcement practices. Alternatively, she is using "September 11" as a prop.. That has been done before (see  "Iraq, War In"), with disastrous consequences.