The Bar Set At Sea Level


The bar has been set so low it's almost underground.

It should be no surprise, then, that many months ago it assembled "The POLITICO Caucus-  a panel of activists, operatives and strategists in 11 key battleground states" to tell us what to think.

Today's takeaway of the Trump moment in Mexico City is "a majority of Republicans" believes "Trump appeared presidential and diplomatic in the foreign capital."    One Republican from Pennsylvania remarked “Trump finally looked presidential, calm and assured. The voters he needs to win dislike him not on message, but on his approach and demeanor; Mexico and Phoenix will start to allay their concerns."

For the GOP nominee for President, it is now a qualifying attribute for leader of the Free World that he not always appear as if his head is about to explode and he is not preposterously offensive to a wide swath of individuals.

Still, looks can be deceiving. Nonetheless, at a news conference after the meeting Trump stated "Who pays for the wall." Responding, President Enrique Pena Nieta tweeted "I made it clear that Mexico will not pay for the wall."

This is not a case of "he said, she said" (an awful saying, derived from "he said, she said"). Nor did Trump lie; it's unlikely they discussed the wall.  Pena Nieto said Mexican payment is a non-starter, and Trump obliged.   A fellow with a 23% rating in his own country immediately stands up to the self-promoted tough guy who, in Antonio Villaraigosa's words, "comes out barking like a pit bull, goes down to Mexico and turns into a Chihuahua.”

But Trump's statement on the podium with Pena Nieto gives us a flavor of what happened in the meeting.  Rapists, drug dealers, and assorted criminals were a thing of the past now that

the United States first, second and third generation Mexicans are just beyond reproach. Spectacular, spectacular hard-working people. I have such great respect for them and their strong values of family, faith and community.

Trump excoriates the North American Free Trade Agreement is the "worst trade  deal in history," compains the nation "become more dependent on foreign countries than ever before,".and implores us to "declare our economic independence once again." We now find the "America First" candidate wants merely to tweak the agreement, now that he has

shared my strong view that NAFTA has been a far greater benefit to Mexico than it has been to the United States and that it must be improved upon to make sure that workers, and so important, in both countries benefit from fair and reciprocal trade.

The once- anti- NAFTA crusader expressed mainstream views that could have come from Hillary Clinton or Bill Clinton, the latter a signatory to the NAFTA after he secured enviromental and labor concessions. Trump maintained the two nations have many "shared goals' and "a common interest in keeping our hemisphere safe, prosperous and free."

"A picture is worth a thousand words." it is said. Sometimes those pictures are misleading. But Donald Trump is adamant that  "Mexico will pay for the wall- believe me," frequently pokes his finger to make a point while he plays the alpha dog before every audience and calls his opponents "little Marco," "lying Ted," "low-energy" JEB, and "corrupt Hillary."

Then he faces a head of state, shuts his mouth about his "big, beautiful wall," and looks like he he got his rear end whipped (photo from Rodrigo Cruz for The New York Times).  And the political media says he "looked presidential." What  would it  take for him not to look presidential? 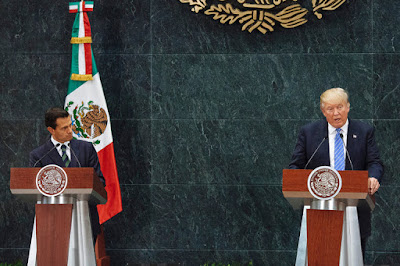