On May 12, 2012 the Vice-President told a Meet The Press audience he is "totally comfortable" with the notion of men marrying men and women marrying women.  He then was forced to endure the condescension of the President, who apparently had not yet fully evolved, commenting that his second-in-command "probably got out a little bit over his skis, but out of generosity of spirit." Under the figurative gun, Biden's spokesperson had to remark that the President "has been the leader on this issue from day one, and the vice president never intended to distract from that."

Soon thereafter, Obama evidently had fully evolved, as he recognized that he could not allow his running mate to appear more so than he.    The shift in public support for same-sex marriage accelerated and on November 6, three states (Maine, Maryland, Washington) approved an initiative and/or law legalizing gay marriage while one (Minnesota) rejected a ban.  Only one state (North Carolina), affirming a same-sex marriage ban, went the other way.  And the Obama-Biden duo won re-election.

The odds Barack Obama's immediate subordinate will obtain the 2012 Democratic presidential nomination took a blow in January when President Obama scored on 60 Minutes an interview with Hillary Clinton which "teetered on an endorsement of her 2016 presidential bid."   Clinton, for reasons obviously beyond that of a nod and a wink from the sitting president, is the choice of far more Democrats than Biden (or anyone else) for that nomination.

So don't get too angry with Joe Biden.  It's understandable that he made a remarkably inane statement at a pre-campaign, campaign event over the weekend. On Saturday, at Senator Tom Harkin's annual steak fry in Iowa, Vice-President and Democratic presidential hopeful Biden exclaimed "a lot of people criticized me for speaking out, not long ago, about gay marriage. I could not remain silent any longer. It's the civil rights of our day. It's the issue of our day."

For people who support same-sex marriage, it is a civil rights issue and perhaps the most important one of the day, depending on what one considers a civil rights issue, such as women's rights (which Biden traditionally has been strong on).    But those "lot of people," Mr.Vice-President?  Perhaps people related to Priorities USA Action, the Democratic SuperPac promoting Obama's re-election, or individuals devoted to little else than the re-election of the person, Barack Obama.  However, liberal bloggers at the time (and thereafter) supported Biden's declaration and Republicans, conservatives, and other Obama-haters seemed not to care very much.

Nevertheless (as the graph, below, from wikipedia via Forbes indicates). Biden appears oblivious to the increase in the percentage of the share of income in this country going to the top 1%.  Measured since 1910, it was at its lowest in the late 1970s and creapt upward to 23.5% in 1910   That would be the highest since 1928, not coincidentally the year before the advent of the Great Depression. 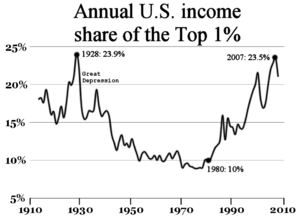 This trend has only accelerated. In her Wall Street Journal (!) blog, Brenda Cronin noted that from 2009 to 2012, the top 1% received 95% of the total gain in income. In 2012, the richest 10% received more than half of all income, its largest share since record-keeping began in 2017.

Illustrating an inverse correlation internationally between reduction in marginal tax rates and increases in the pre-tax income share of the top 1%, Emmanuel Saez demonstrates (graph, below) that the 1% have a greater share of national income than it does in (17) other developed countries. 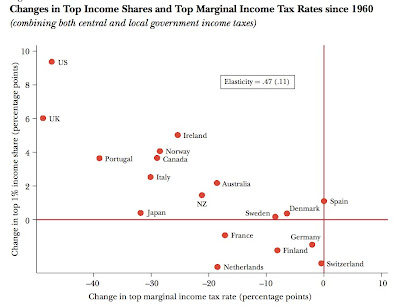 That is income. The disparity in wealth is far greater, as indicated in the  pie charts (below) from 2007 data from the Survey of Consumer Finance, calculated by Ed Wolff, and presented by the Center for Budget and Policy Priorities: 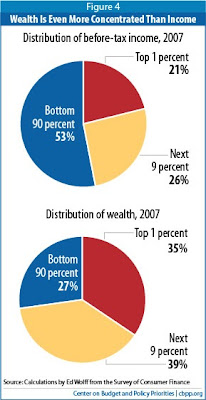 If he were to frame the argument as either other nations are doing it better or the wealthy are too wealthy, Republicans would summon faux outrage and the mainstream media would be intimidated, with both urging voters to reject  "class warfare" and the "politics of envy." Biden might then shame the media,by reminding it that the people want (chart, below)  a more equitable distribution of wealth than prevails today.

Still, the vice-president would not have to stress the fleecing of America by the uber-rich, but rather the declining prospects of the middle class over the past four decades and its diminishing share of the fruits of American prosperity. "Widely, unequal societies," economist Joseph Stiglitz has written, "do not function efficiently and their economies are neither stable nor sustainable in the long term."

It would not be so difficult to emphasize, with a little historical perspective, that low tax rates for the wealthy, and trade deals unfavorable to consumers, are brought by lobbyists who squeeze most Americans and erode their living standards. Biden could argue that the squeeze on the middle class is far more "the issue of our day" than is same-sex marriage. And that would distinguish himself from the likes of Clinton, Cuomo, Mark Warner, and even Mark O'Malley.